The group One Voice wants a baby dolphin reunited with its mother at a marine park near Paris. 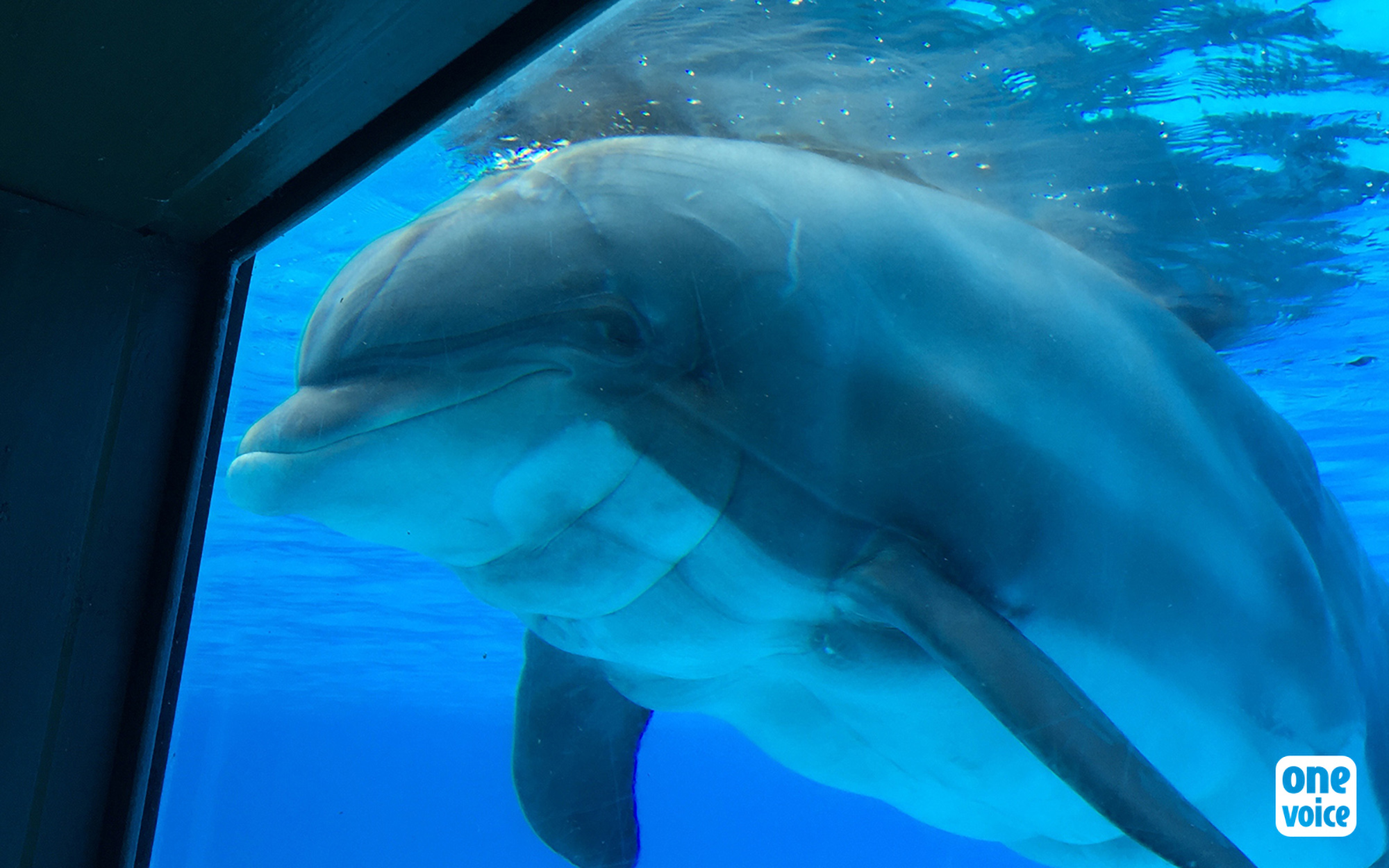 Femke, a mother dolphin in France floats in her tank after her babies were taken from her. (One Voice/Newsflash)

An animal rights organization is again mounting pressure against the captive breeding of animals years after a baby dolphin was taken from its mother at a marine park in France. The group claims the mother has been suffering ever since.

One Voice was supposed to meet with French authorities on July 9 to discuss reinstituting the ban on the captive breeding of marine animals and their trade, but it has been postponed, the group said, and a new date has not been set.

In 2017, France banned the breeding in captivity of dolphins and killer whales. Under the new government in 2018, the country’s highest administrative court overturned the ban.

One Voice claims that very often after births in captivity, newborn dolphins and whales die. The organization also wants a ban on the sale of marine wildlife.

Dolphins and whales are the most common marine mammals kept in captivity.

A video released by One Voice shows female dolphin Femke at the Parc Asterix theme park in the commune of Plailly in the Oise department in northern France, roughly 28 miles (46 kilometers) from Paris. One Voice claims that the footage was taken sometime after the dolphin’s babies were taken from her or died and that she appears to be grieving.

Parc Asterix in 2017 denied that Femke was depressed, saying that she suffers from Cushing’s syndrome, which occurs when the body is exposed to high levels of the hormone cortisol over a long period of time.

Another animal rights organization, the Fondation Brigitte Bardot, founded by the famous French actress, claimed in 2018 that Femke became ill shortly after her baby was taken from her.

A 2018 petition co-signed by One Voice and the Fondation Brigitte Bardot that garnered 149,383 signatures sought to have Femke reunited with her baby, which was sent to Greece, and have them both moved to a sanctuary for marine animals.

“Femke, one of our 37-year-old female dolphins, has a chronic disease called ‘Cushing’s syndrome,'” a spokesperson for Parc Asterix said. “This well-known syndrome in dogs and horses was diagnosed in April 2017. It produces too much cortisol and causes characteristic swelling.

“For more than a year, Femke has benefited from personalized and progressive treatment to reduce cortisol production.

“Five European veterinarians, specialists in marine mammals, are involved in monitoring her state of health, as well as a team of 10 experienced medics who are redoubling their attention in the face of this incurable and progressive disease.”

Parc Asterix is based on the comic book series Asterix by Albert Uderzo and Rene Goscinny. It is the France’s second biggest theme park after Disneyland Paris.

At another theme park in France, Marineland Antibes, on the Cote d’Azur between Cannes and Nice, images from One Voice show an orca called Inouk that the animal rights organization claims has lost nearly all of his teeth from gnawing at his enclosure.

Large marine mammal aquariums, such as SeaWorld and others, post statements about the attention they give to care of the animals.

“Assuring the health and well-being of the animals in our zoological parks is a responsibility our skilled professionals take extremely seriously,” SeaWorld SanDiego writes on its website. “Our advanced programming applies a broad range of best practices based upon behavioral enrichment, preventive health, veterinary medicine and facilities design and management. Our programs and policies are affirmed by numerous federal and state laws … .”

Animal rights organizations, on the other hand, maintain that marine mammals are not suited for confinement and should remain in the wild where they can stay with their family units.

“The Humane Society of the United States believes that these animals are best seen in their natural coastal and ocean environments instead of being held captive simply to entertain people,” the organization states on its website. ” … Life for captive whales and dolphins is nothing like a life in the sea.”

One Voice believes that whales should be in sanctuaries — large protected areas in the ocean that allow them to learn to swim long distances “in a straight line instead of going around in circles,” according to founding president Muriel Arnal, and learn to hunt for their food and live where they can be protected.

One Voice is suing the French government, claiming it is letting these animals suffer. The organization is seeking $570,000 (500,000 euros) that it says it would use to set up a marine wildlife sanctuary.