Fight breaks out over food shortage as refugees go hungry

As Uganda locks down to avoid the pandemic, refugees said food aid is scarce. 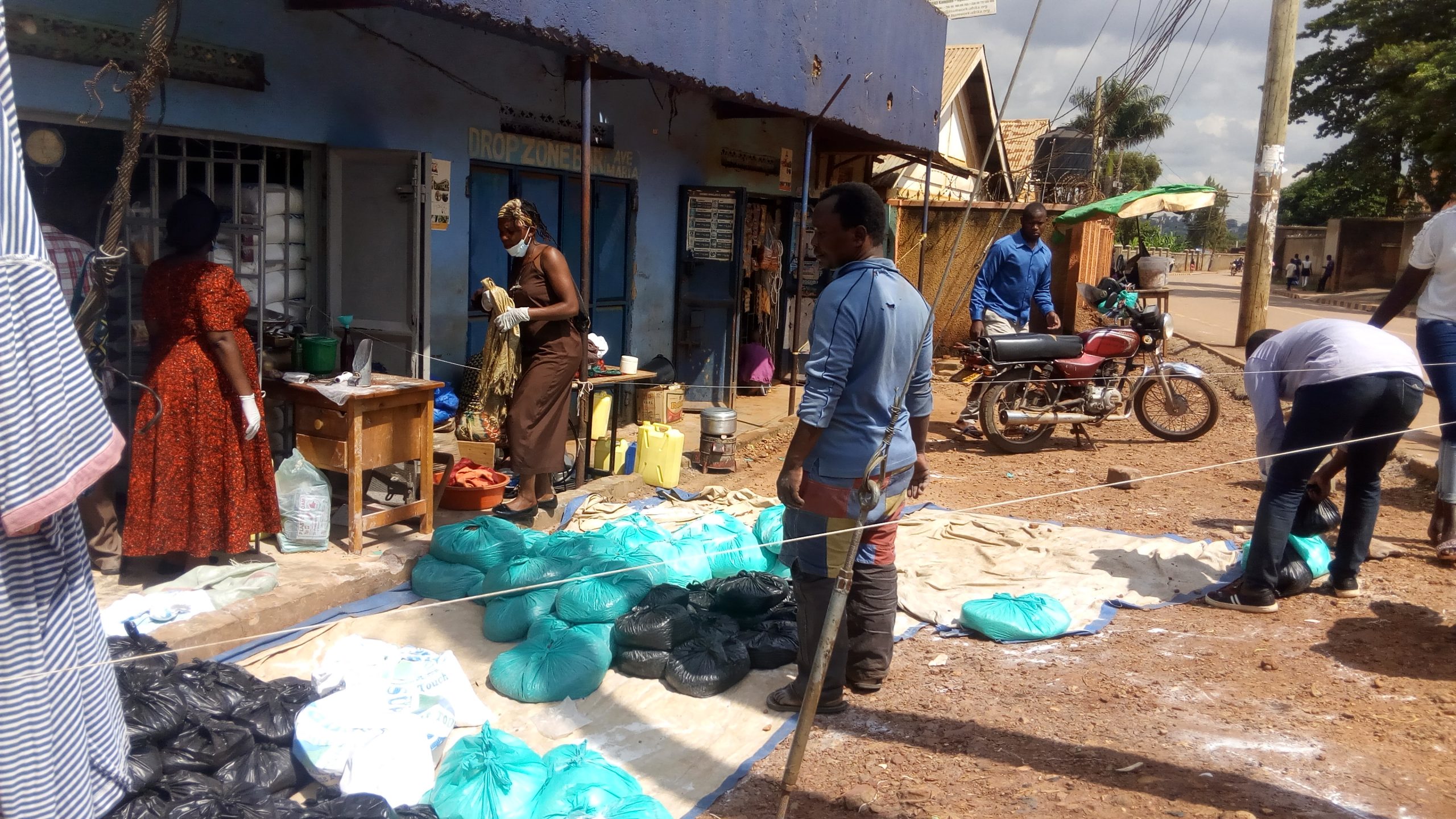 Kampala, Uganda—With food gone and six children to feed, 40-year-old Zawadi Kizungu had no choice but to walk miles to find food, and stepped into a food shortage troubling all of Central Uganda.

She braved the early morning chill and walked 16 kilometers, nearly 10 miles, from her home in Ndejje, a village on the outskirts of Kampala, the capital, to Nsambya Ave-Maria suburb to get relief food being distributed to refugees by the Jesuit Refugee Service.

When Kizungu, who was in the company of her 16-year-old, arrived at the store where food was being distributed, she waited patiently for 12 hours in the scorching sun for the food aid.

After enduring the blazing sun for half a day, she was not ready for the bad news.

The store owner, who was contracted to distribute the food rations, told her and a group of other refugees they would not get food, she said.

Food would be distributed the the following day, they were told.

But it was just the beginning of a bad day for them, as police were called to break up a fight at the distribution point.

“We walked miles searching for food, and these people didn’t value us. They are good at claiming they have given us 10 kilograms [22 pounds] of maize and flour, but in reality, it is only 7 kilograms or 6 kilograms. They abuse us. They harass us and we are like not humans to them,” said Kizungu, who left the Congo, her country of birth.

Uganda is home to more than 1.4 million refugees, making it the largest refugee host in Africa. More than 1 million of those refugees have entered within the last four years, with the majority fleeing conflicts in South Sudan, which split from Sudan in 2011, and the Democratic Republic of the Congo, which has been embroiled in conflict for decades.

The East African country has welcomed forcibly displaced people and allows refugees to move freely and accords them the right to work. Some refugees still live in camps, while others migrate to urban areas. Those in urban centers like Kizungu have been hit hard by hunger and and greatly affected during the Covid-19 pandemic.

Uganda had 953 confirmed cases of Covid-19, according to data compiled by Johns Hopkins University. The disease is caused by the new coronavirus, which has infected millions globally.

Jesuit Refugee Service Country Director, Father Frido Pflueger, said his organization distributed food to 4,602 refugees in 1,005 households over a 10-day period in May.

“The last 10 days were very difficult because the people are very hungry and came in huge numbers to our compound, where we tried to keep all security measures to avoid infection. But it was nearly impossible. We collaborated very nearly with the LC1 [Local Council] of our area all the time. We had to ask the help of the police and even the OC [officer in charge] to clear the situation,” Pflueger said.

“The behavior of some was very rude and rowdy,” he said. “Also, the neighbors started to be frightened when the whole road in front of our gate was filled with people, starting at 4 a.m. It was dangerous for our guards and also for our staff who tried to attend to the needs of the suffering people. We even had to close our operation for two days to calm down the situation.”

The Jesuit Refugee Service has continued to receive and support referral cases from partners including the Norwegian Refugee Council, Care and Assistance for Forced Migrants, Refugee Law Project, and Young African Refugees for Integral Development, known as YARID, when they are limited in terms of access or resources.

“We did not have food stocks at home,” Kizungu told Zenger News.

Hundreds of refugees have claimed that aid agencies such as the United Nations High Commissioner for Refugee, or UNHCR, have neglected them. They allege that the UNHCR has not given them any support during the pandemic.

“UNHCR promised to send us cash support during this difficult time of Covid-19 since most of us are not earning anything, but we haven’t heard from them,” said Fidele Kabene, a refugee and a field officer at YARID.

“The UNHCR is in the process of providing refugees a one-off cash assistance to cover for their needs for the next three months, and since the cash assistance will be transferred through mobile money, the first step is to verify all the telephone numbers of Kampala-based refugees in the database and to provide SIM cards to those refugees who don’t have telephones,” Khan said.

Although refugees who opt to reside outside refugee settlements in Uganda are not entitled to material assistance, the Covid-19 lockdown and other containment measures will see UNHCR providing support, Khan said.

At another food distribution center where Kizungu and her son claimed they were harassed, Kasaba Moses, the owner of the store which the Jesuit Refugee Service contracted to serve refugees food said, “Refugees are not easy people to manage. On several occasions they have complained to JRS that my weighing machine is not good, but I have proved to my bosses that it is OK.”

Several attempts to get comment from Musa Francis Ecweru, Uganda’s minister of state for relief, disaster preparedness and refugees, were unsuccessful. He was in Kasese District in the western part of the country, attending to the people affected by floods. Some 100,000 people were displaced and at least eight died.