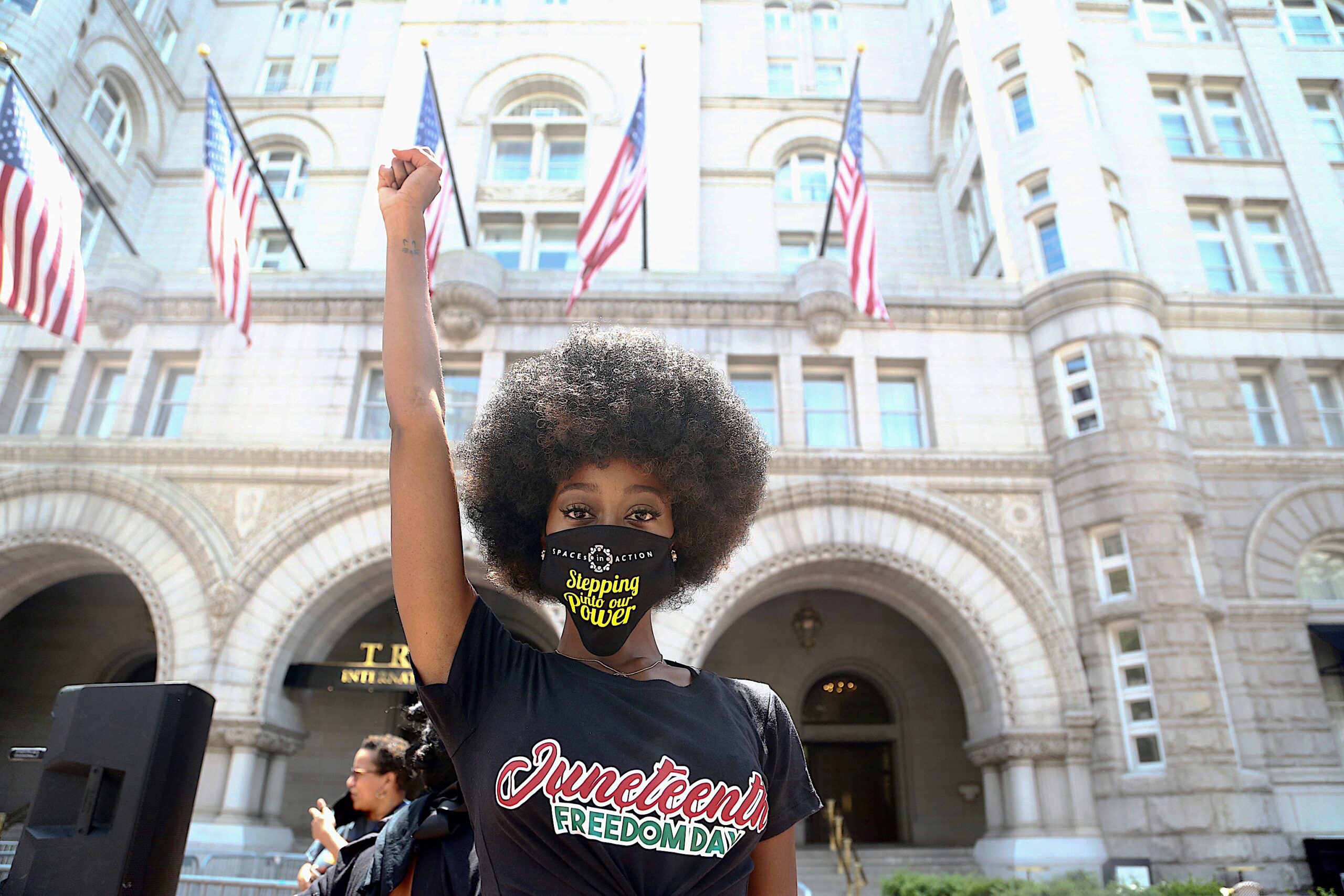 After weeks of media coverage about rioters and looters who hijacked protests following George Floyd’s death, Washington D.C. held its breath as Juneteenth marches wound up their springs on Friday.

No one needed to worry. It was festive, not angry. People sold T-shirts. One woman led hundreds down Pennsylvania Avenue while belting Beyoncé’s “Freedom” anthem at the top of her lungs through a bullhorn.

This was a victory parade.

Black Lives Matter activists have made their point and won millions of converts since May 25. Fortune 500 companies and major league sports are on board. Celebrities everywhere have become force multipliers. In some cities, police officers knelt in common cause with groups of activists.

And here they were on Juneteenth, blocks from America’s epicenter of power. Not demanding to be heard, but dancing for joy that everyone, everywhere, was finally listening and that African Americans were writing a new chapter in a never-ending story.

More than a dozen demonstrations had more than a dozen messages— “Defund the Police” and “Defend Black Women” were two—but the violent subculture seemed to stay home, and seemed to know this wasn’t their moment.

No one was looting or setting fires. The only glow came from mostly black faces with ear-to-ear grins that peeked out when COVID-19 masks came off.

Yes, we saw performance art. A Latino portrayed a crucified Jesus, complete with a giant wooden cross, and a cloth across his hips with the letters B-L-M painted in slapdash foam-brush dabs.

And the sounds! Social justice chanting competed for our ears with the occasional drummer and a trombone player, blasting his brass in front of the Trump International Hotel.

“No Justice, no peace, no racist police.” Some women held simple signs, each with the name of a black woman or girl killed by law enforcement. Nunruh Laroche. Della McDuffie. Deeniquia Dodds. 100 in all. The signs were simple, just the names in black letters, floating on a white background.

One little girl tried to whip up her own chanting section. “Black kids, we are so cool!” she shouted. “So get the cops out of our school!”

Cops were scarce. The roads were already closed, and a few squad cars and motorcycles were visible—but far away.

Standing at Freedom Plaza, just a few blocks from the White House, you could see all the competing marches converge. And walk together. And sing.

They did it all in a pounding rainstorm, and they didn’t care how hard the drops fell. The heavens were weeping for joy, so why shouldn’t everyone get wet?

(As told to David Martosko)