MEET AN ANIMAL: Texas bull ‘Top Game’ is fathering the next generation of Walmart’s beef

Like an Ivy League–educated sperm donor who might father a half-dozen children he’ll never meet, Top Game’s seed could sire tens of thousands of calves. Most of them will become meat sold by America's largest grocery retailer.
By David Martosko June 12, 2020
Facebook
Twitter
Linkedin
Email 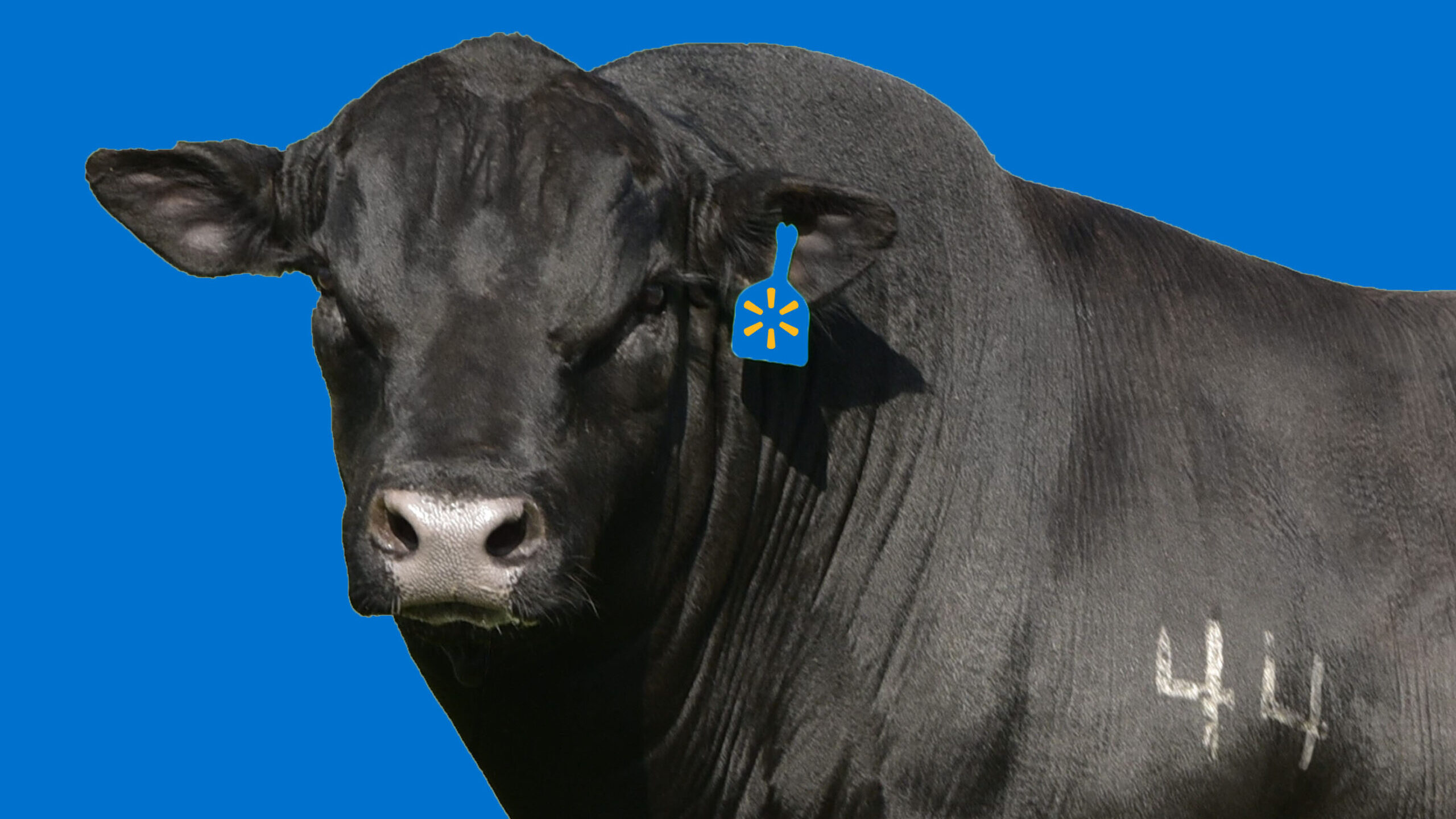 Top Game — that’s the name they gave him — is one of the luckiest Black Angus bulls alive. The four-year old won’t be dinner anytime soon. His sperm is too valuable to Walmart.

This chiseled block of meat weighs 2,127 pounds and stretches eight feet from nose to the base of his tail. His hips stand more than five feet off the ground. Top Game is one of just a handful of animals whose genes will sire generations of the mega-grocer’s future shrink-wrapped steaks and roasts.

Just a handful like him form the roots of Walmart’s new beef family tree, a project the company says it started in January in 500 stores across Alabama, Florida and Georgia. Top Game’s owners want the program to go national.

“Our main business is Angus genetics,” says Bob McClaren, the head honcho at 44 Farms in central Texas where Top Game roams and grazes on an ordinary Saturday. That means auctioning off hundreds of animals, thick and muscular, twice a year. It also means selling prime bull semen for $30-per-quarter-milliliter.

Top Game is a top performer. His DNA is genetically upgrading calves-to-be in dozens of states, and much of the result is destined to be part of the Walmart program.

A top Angus bull from 44 Farms can fetch more than $100,000 at auction. Top Game would easily fetch $50,000 or more, McClaren says. A more typical auction price is between $7,000 and $10,000, according to the American Angus Association, with one bull or cow sold every 40 seconds once an auctioneer starts rat-a-tat-tatting.

But its genetics program was big enough and McClaren, who was president of the Houston Astros for seven years, was business savvy and persistent enough to grab Walmart’s attention.

The partnership hangs on the DNA from a roster of top bulls who reach sexual maturity and start breeding at around 14 months of age. Since Black Angus ranchers track every animal from birth to feedlot, and then to slaughter and packaging, Walmart can boast its entire supply chain is on its way to transparency.

McClaren’s operation measures everything, charting complications in labor and delivery, the calves’ growth and temperament, and even the shape of their hooves, all so it can choose which lucky bulls’ only job is impregnating cows.

It’s a dust-caked form of the statistical analysis the Astros used to reach the World Series. What amounts to Top Game’s jersey number, 6059, is dry-ice branded on his side and carried on a Radio Frequency ID ear tag.

“We track marbling in the meat, the size of calves, everything,” McClaren says, even a bull’s sociability and the size of his scrotum. “It’s all genetics now.”

Top Game is “relatively docile,” unlike some “wild and crazy” bulls he won’t sell or breed, he says.

For now he’s been left to nature’s devices, stud to a group of 25 cows. But making one calf at a time is Old MacDonald tech. Soon he’ll have his semen harvested, frozen and sold to ranchers thousands of miles away.

McClaren says he believes Top Game has the “right stuff” and that his offspring will have superior “genetic firepower.”

“We see him producing and selling thousands of units of semen each year to commercial cattle producers,” he says.

Artificial insemination can distribute a single emission to hundreds of cows, with a 60 percent pregnancy rate, but only if farmhands intercept it first.

A bull in this program mounts a cow who’s in heat, a few days each week, a few times each day. But he’s diverted at the last second into a condom-like device that collects the fluid.

After lab inspection, the semen is transferred to sterile 1/4-milliliter straws and frozen in liquid nitrogen. The result is worth more than twice its weight in gold.

Many ranchers practice in vitro fertilization, so it’s common in 2020 for cattle auctioneers to gavel sales of “embryo packages”—eggs from top breeders fertilized with super-sperm to give lesser cows top-shelf offspring.

All this science flies over Top Game’s massive head. He moseys and sniffs, purposeful but placid, tracing the steps of other mega-elite Angus bulls with names like Bragging Rights and Arsenal.

It takes about 45 pounds of food every day to keep him growing. It’s mostly “silage” from sorghum crops—fermented leaves stored up after harvest—and the remains of cotton plants after the white fibers are plucked out. No added hormones, additives or antibiotics, as is the trend.

Top Game will likely live to the ripe young age of 13. He might develop arthritis at 8 or 9, making it harder for him to perform his duties.

“We breed for that too, delaying arthritis,” McClaren says. “Health, longevity, performance, you name it.” And ranchers who buy cattle from him must send back data to track how the progeny perform.

And then what? Older bulls go to a “cow plant” when their time is up, he says. “No steaks, just ground beef for the fast food industry. And maybe dog food or cat food.”

Top Game’s final chapter might be two all-beef patties or a can of Alpo, but the U.S. economy will find a use for the rest of him, too.

“We’re harvesting thousands of head of cattle each week for Walmart, and every bit of these animals is used,” McClaren says. “The hide becomes car seats.”