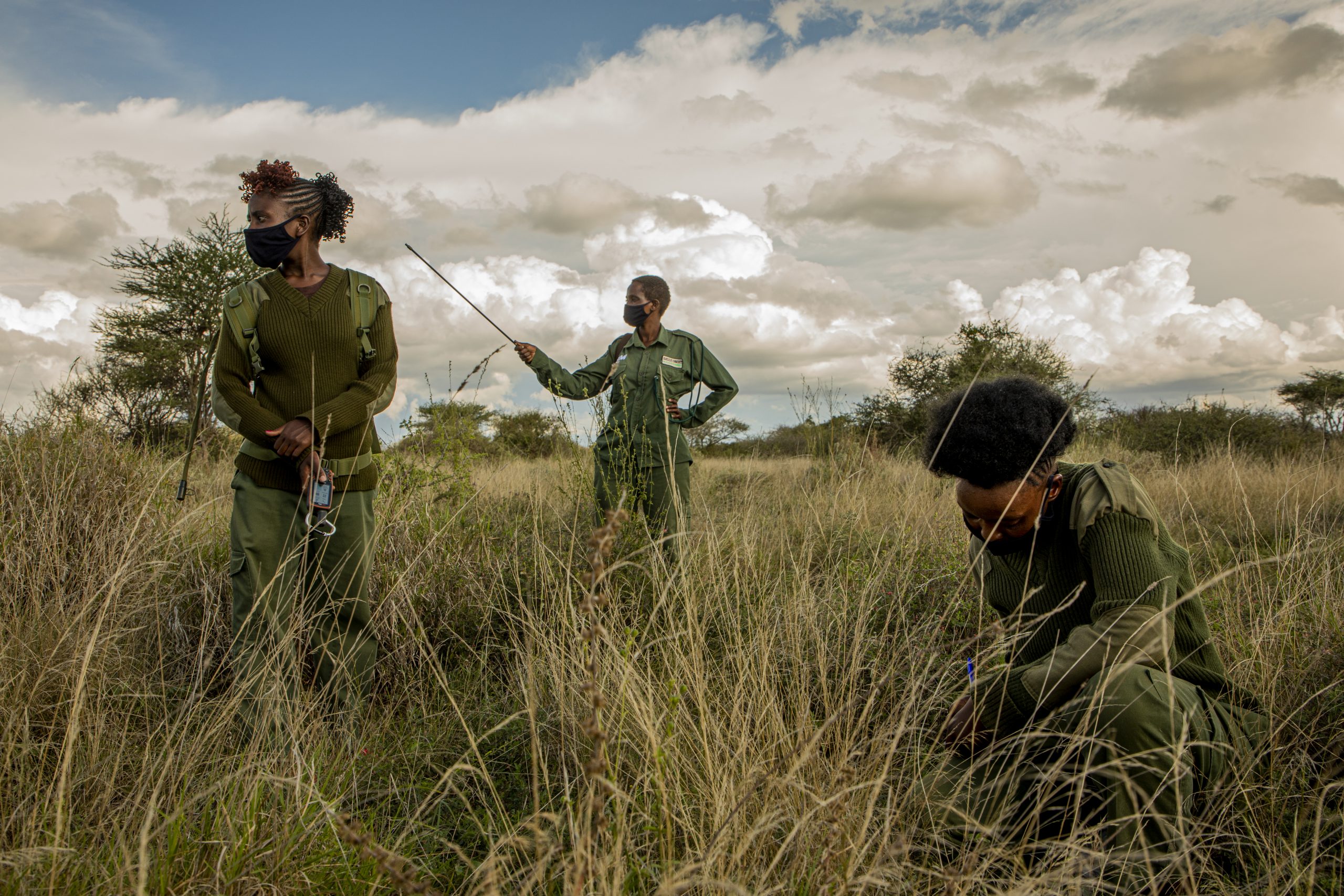 Community rangers supported by the International Fund for Animal Welfare (IFAW) conduct a wildlife patrol at the Olgulului Ololarashi Group Ranch in Kajiado, Kenya on April 22, 2020. (Photo Courtesy: Will Swanson/IFAW)

Last year, Kenya reported a 90% decrease in wildlife poaching, but the advent of COVID-19 has stirred concerns the country’s national parks may draw new illegal hunters left jobless by the pandemic.

Standing in their way despite the threat of illness is a group of eight women drawn from the Maasai community, known as Team Lioness.

Team Lioness members were given the option to remain employed full-time and on patrol at Amboseli National Park, a 392-square kilometer reserve that lies at the foot of Mount Kilimanjaro, with the understanding that they would have little or no contact with their families during the pandemic. When they are not out patrolling, they remain in their base camp doing paperwork.

Though Kenyan authorities say there has been no increase in poaching thus far, international wildlife agencies are worried about the impact that closing national parks to tourists as part of efforts to stop the spread of the virus will have on the welfare of the animals.

“In [tourism’s] absence, wildlife security is threatened as conservancies are likely to collapse, leading to loss of space for wildlife,” said a recent report by the International Fund for Animal Welfare.

And tourist arrivals around this time of the year are usually very high, and the hospitality industry employs more than 1.2 million Kenyans, said Nancy Githaiga, the head of policy research and innovation at the World Wildlife Fund.

Many of those workers provided security in national parks, including anti-poaching efforts and battling human-wildlife conflicts. But they have all been sent home during the pandemic, said Githaiga.

The Kenya Wildlife Service and community conservancies depended heavily on tourism revenue to pay the salaries of rangers, said James Isiche, East Africa regional director for the International Fund for Animal Welfare. But after the government locked down the country in response to the pandemic in March, there was a reported 98.9% decline in tourism revenue.

Without those revenues, the Kenya Wildlife Service and conservancies are no longer in a position to continue anti-poaching operations without the aid of subventions, he said.

The fund has therefore kept its team of rangers patrolling national parks like the Amboseli, which is is home to elephants, rhinoceroses, buffalos, giraffes, gazelles and numerous other species whose hides and horns are highly prized by the illegal wildlife trade.

The fund’s Team Lioness have been effective in deterring poachers, Isiche said.

Team Lioness member Loice Soila said the stress created by the pandemic has made her job even more critical. “Families living around the Amboseli are mostly employed in conservancies as casual workers. But they lost their jobs due to COVID 19. Most of them are idle and this is tempting them to engage in poaching,” she said.

She is happy the Kenyan government has declared her job an essential service. “Taking care of wildlife has been my favorite choice since I was in school. I have been doing that since I joined Team Lioness and will continue to do so despite challenges like COVID-19,” Soila said.

However, the lack of contact with their communities has in some aspects made an already difficult job harder, since community interaction was a principal means by which rangers would gather intelligence on planned poaching activities, said Jacqueline Nyaga, the communications manager at the fund.

Even communicating over the phone is difficult because Team Lioness usually works in areas that have poor network connectivity, Nyaga said.

The long absence from home has added to the stress they and other Kenyans are experiencing, said Eunice Peneti, another member of Team Lioness. “We cannot go home to see our families and loved ones. This is straining our social lives,” she said.

The job presents other challenges for these young women, including braving extreme heat or flooding when tracking animals, said Peneti. There is also the ongoing danger posed by human-wildlife conflict, which the team has to face without the aid of firearms or other gear to protect themselves.

“These animals can injure and kill a victim. But I am proud of my work because it has proved that a woman can do what a man can do. This has earned me respect in the society,” said the 28-year-old mother of one.

The rangers have received the requisite safety equipment to protect them from COVID 19, as outlined by the Kenyan government and the World Health Organization, said the fund’s Isiche.

Team Lioness has brought benefits other than greater gender equity to the role, he said. “Women… interact with nature in many ways, sometimes even more than men, as their responsibilities and daily chores of running their households may mean they are more aware and in tune with their environments as they fetch water, collect firewood and tend to livestock.”
He expects their work to continue, he said, but the fund will continue to monitor the situation to ensure the threats to wildlife do not intensify with deteriorating economic conditions.
(Edited by Jewel Fraser and Matthew Hall)