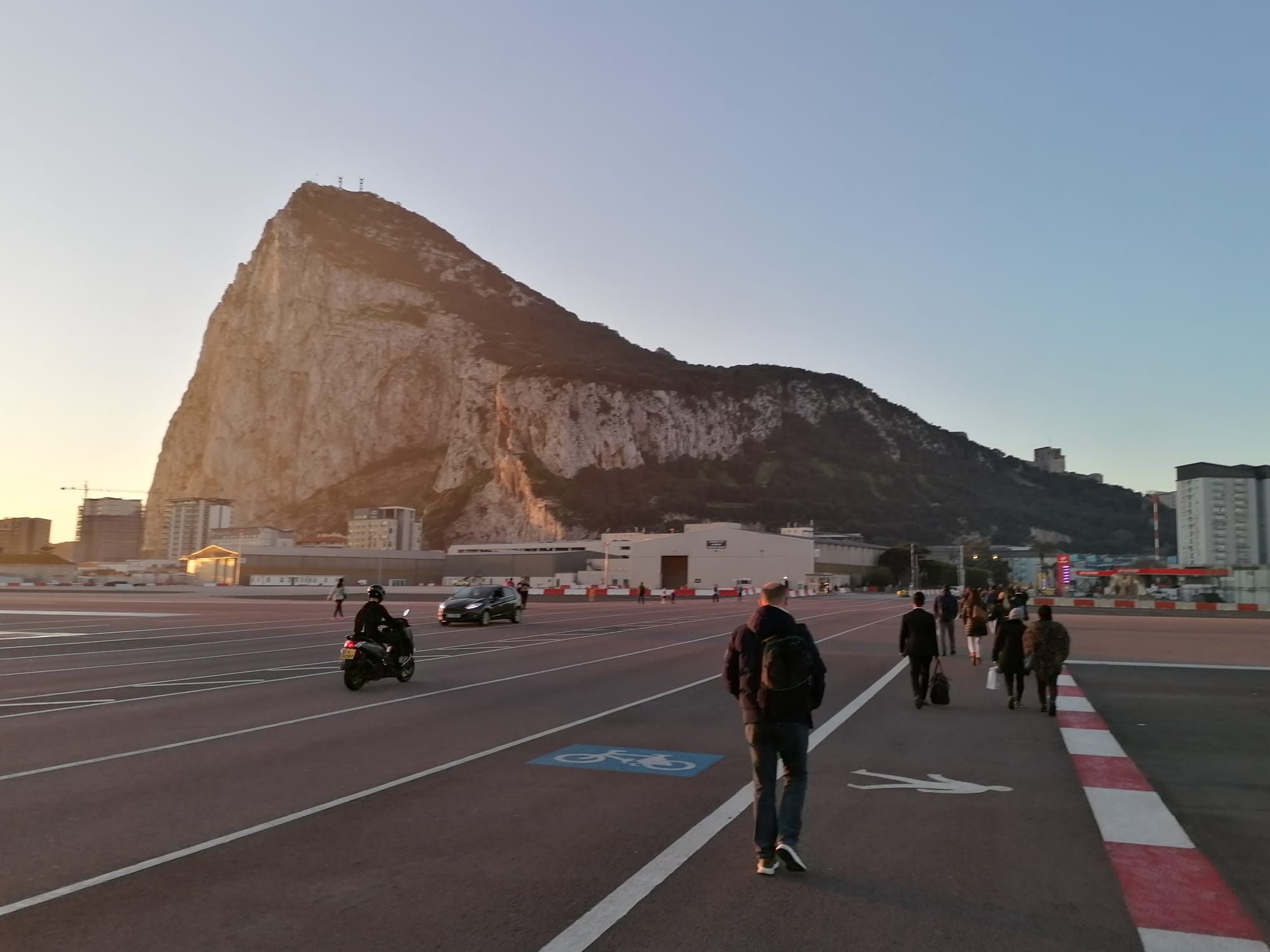 Several workers walk on the Gibraltar landing strip on their way to their jobs on June 2, 2020. (Jorge Gutiérrez/Zenger)

Gibraltar is only part of the United Kingdom connected to continental Europe by land. Now, many ask, is it about to be cut off?

In the wake of COVID-19 and Brexit, some fear that Spain may close the border for the thousands who go every day to work on the 2.6 square-mile English-speaking peninsula. After all, they say, Spain has long sought to revoke the 1713 Treaty of Utrecht that gave the land to Britain in perpetuity and that Gibraltar is now one of the world’s richest lands on a per-capita or per-mile basis.

The tiny nation at the dangling, southern tip of the Iberian Peninsula, is isolated from Spain and the rest of Europe by geography, history and politics.

But in the months since Brexit, the United Kingdom’s exit from the European Union on Jan. 31, its circumstance has only become more confusing and more uncertain.

Officially, Gibraltar is a British Overseas Territory and more than 95% of its voters in the UK’s 2016 referendum wanted to remain in the EU. But Gibraltar’s situation is far more complicated than that of other British territories. That’s because Spain, the country that politically and symbolically sits atop it to the north, exercises a territorial claim on it—a claim the nation itself has long rejected.

A day after Brexit, Spain’s acting foreign minister called for joint Spanish-British control of the peninsula. The British rejected that claim. Many in Gibraltar reject the advances of both nations.

The desire for control is about more than access to the Mediterranean—the country crams 34,000 inhabitants within 7 square kilometers, or 2.7 square miles, and its GDP is among the highest per capita in the world among territories.

But if this has been a politically fraught period for many in Gibraltar, for the approximately 15,000 workers who regularly cross the border with Spain it has been a time of tremendous anxiety and confusion.

“I have noticed fear in other people, and especially a lot of speculation,” said Karina Ortiz,  who lives in Campo de Gilbratar, just over the border in Spain, and crosses into Gibraltar daily. Many, she said, are “uncertain about what [is] going to happen with their legal or immigration status, or with their work.”

A native of Mexico, Ortiz is perhaps better equipped for this uncertainty than most, having negotiated a crossing for years in going back and forth between Ciudad Juarez and El Paso, Texas, one of the most scrutinized borders in the world. Her experience affords her perspective.

The general pattern, she said, is that governments “adopt strict measures” at the beginning and that those laws will be “softened over time.”

Having emigrated to Cordoba, in Andalusia, seven years ago, the freelance creative director has already moved twice since then. The larger upheavals in her life, though, have come with the bureaucracy she has had to negotiate — a difficult matter for many immigrants, but an especially difficult undertaking in Gibraltar.

She applied for residency. The process took 3 years, only in part because her European residency had expired.

At one point, she was so desperate she considered getting married to ensure her residency. “Obviously I didn’t want to get married for documents. I want to marry for love. Thank God my nationality finally came.”

Even after she had obtained residency, she was not done with the hoops of bureaucracy. She never considered leaving, however. And she believes that Gibraltar—for all its problems at the border, and all its political uncertainty—is committed to making sure she and other immigrants don’t leave, for the simple reason that they are vital to productivity.

“Although you are a foreigner, you are a worker, you are contributing wealth to the country,” she said. “The government is aware of this.”

Ortiz has leveraged her creativity and perserverance to endure. Those are not traits that everyone possesses, and for the nearly 3,000 Latin Americans who live in Campo de Gibraltar, according to the census of the government of the Andalusian region, life has become more tenuous.

Fiorella Locantore, a native of Venezuela and a resident of Campo de Gibraltar, said that she has detected something different in the air in the past year: fear.

“People are more afraid of what is going to happen,” she said, “of jobs.”

Locantore works in the marketing department of an online gaming company. Gaming is a vital industry in the country. Gibraltar has long enjoyed its status as one of the most important European centers in the online betting space. Because of this, and also because of the high GDP, a number of multinational corporations maintain offices on the peninsula.

In good times, this has translated to a robust economy. But since Brexit, the pound has faltered. She noted that among her friends, many have seen their salaries affected.

Many speculate what will happen to the border, and how free travel will be. “There is an uncertainty,” she said. “Nothing is clear yet regarding what is happening” on the border.

Mauricio Pacifico, a Brazilian immigrant who crosses the border every day from Campo de Gibraltar, echoes this anxiety.

His biggest fear is a recurrence of what happened at the border in 2015, when, because of new procedures introduced at customs by the Spanish government, it took workers hours  and sometimes days to travel from Gibraltar to Spain. The situation made an already challenging circumstance worse, with hostilities flaring up on both sides of the border.

“If these circumstances were repeated again,” said Pacifico, “it would … be the worst possible situation for those of us who enter Gibraltar every day to work. It would be really disastrous.”

But even if the border remains a free-flowing passage, Paci­fico has other worries about his adopted country. One is stagnation.

New gaming companies have not come to the country, he said. And though he believes that “companies that are already based here will remain,” there is no guarantee for how long. Especially as the exchange rate has affected salaries and many are being made to do with less.

Ortiz, who has more experience than most with the pain and confusion that borders create, remains hopeful.

She longs for her adopted country to work with its neighbor to the north—a “diplomatic way to resolve people’s conditions,” she said, for “the good of the people and the border.”