Israeli officials called the proposed ban on goods and services from settlements in the occupied Palestinian territories ‘the most extreme anti-Israel piece of legislation in the Western world.’ 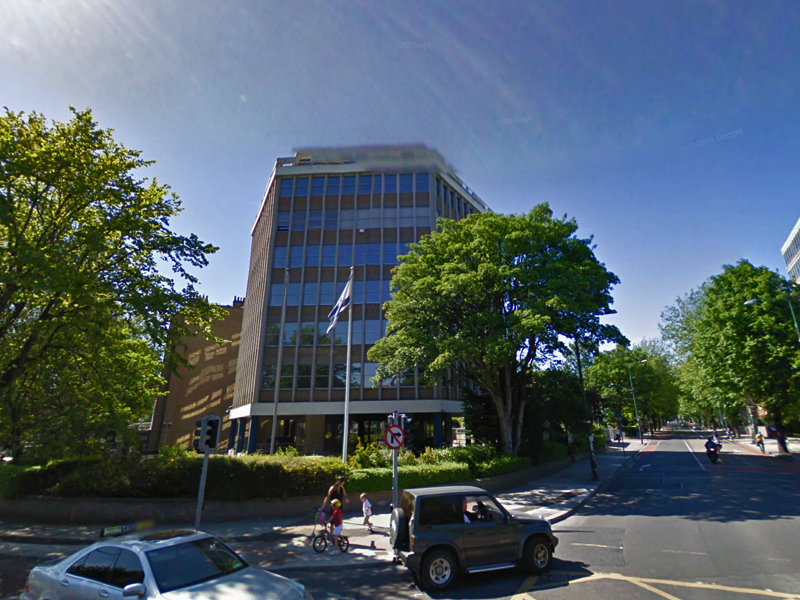 The Embassy of Israel in Dublin, Ireland is pictured on May 16, 2012. (Public Domain)

Negotiations over the formation of a new government in Ireland have hit a snag four months after general elections, with the likely coalition government proposing a ban on all goods and services coming from Israeli settlements.

While the coronavirus pandemic hindered progress on negotiations, the three coalition partners, Fine Gael, Fianna Fáil and the Green Party have in recent weeks moved forward on talks to establish a government. Among the items on the agenda is the Control of Economic Activity (Occupied Territories) Bill 2018 which bans the imports—specifically from disputed territories like East Jerusalem, the West Bank and the Golan Heights.

The bill was passed by the Seanad, the upper house of the Irish parliament, in late 2018 and passed its first vote in the Dáil, the lower house, in early 2019.

Environmental issues, however, are also at the forefront.

The three parties differ on measures to achieve an agreed-upon 7% carbon-emission reduction target. Fracking is also a source of contention: While the controversial Shannon Liquefied Natural Gas project has been set aside, the Green Party seeks reassurances that the state will not import gas from other fracking operations.

Housing is one of two top priorities in election exit polls. The Greens are pushing for the development of state-owned lands to meet demand. Coalition partners, however, oppose a proposed cap on private developer profits.

Changes to the pension age and a freeze on income tax hikes are also part of the negotiations.

Meanwhile the Occupied Territories bill which was passed by a parliamentary committee in December following a review lapsed due to the dissolution of the Dáil and the Seanad on Jan. 14, in advance of the country’s general elections on Feb. 8. It is expected to be put to a final vote before the new Dáil sits—expected by June 30.

The proposed legislation has faced a number of roadblocks. In 2019, the then-Fine Gael-led minority government voted against the bill, stating that it would contravene European Union legislation. The then and current caretaker Tánaiste Simon Coveney, the deputy prime minister who is also minister for foreign affairs, argued that Ireland could not introduce a ban unilaterally. Irish trade policy is dependent on EU policy, Coveney said, and without EU-wide legislation, an Irish ban would be “illegal.” His view is supported by Attorney General Seamus Woulfe.

However, Fine Gael’s coalition partners Fianna Fáil and the Green Party continue to push for the bill’s inclusion in the joint plan for government.

The bill has also faced opposition in the United States, where the Trump administration is supportive of the Israeli government’s plans to expand its settlements. In January last year, 10 U.S. congressmen sent a letter to the then-Taoiseach and current caretaker Taoiseach Leo Varadkar voicing strong opposition to the proposed legislation.

The letter, seen by Zenger News, describes the legislation as a “backwards step away from our common goal, not the path to an independent Palestinian state, living side by side with a Jewish, democratic state.”

American lawmakers urge against passing what they see as an “ill-conceived measure.” The congressmen noted the potential broader economic consequences of the law’s passage, claiming that it could force American companies to “choose between violating Irish law or U.S. Export Administration Regulations. We do not want to see the strong economic links between our two countries weakened due to ill-considered legislation.”

However, the EU is seen as less favorable toward Israel’s actions in expanding its settlements. Of its 27 member states, 25 have expressed strong opposition to Israel’s plans to annex Israeli settlements in the Jordan Valley. Only Austria and Hungary have refrained from criticism of Israel during the latest talks to revive the Middle East peace process.

As government formation talks in Ireland continue, so does the lobbying on the issue. In a statement given to Zenger, the Israeli embassy in Dublin strongly condemned the bill, calling it “the most extreme anti-Israel piece of legislation in the Western world.”

The statement further outlined Israel’s position on the bill: “It is a blatant example of the manipulation and cherry-picking of international law to further an anti-Israel political agenda. Should it become law in Ireland, it would certainly diminish any opportunity which Ireland may have to constructively contribute to the promotion of peace in our region.”

Betty Purcell, spokeswoman for the Ireland Palestine Solidarity Campaign, which supports the bill introduced by Sen. Frances Black, told Zenger that the “Fine Gael-led government used, quite inappropriately, the technicality of a ‘money message’ to stop the bill coming into law. This allows a government to stop a law passing that may cost the government money through, for example, fines in the future.”

However, there is no evidence that the Irish government would be fined by Europe for passing this “justified and minimal legislation,” she said.

Purcell said Ireland could justify making a unilateral stand against Israel “because Israel is in contravention of international law and has signaled its intention to continue and increase these breaches by the upcoming annexation of the West Bank. [Prime Minister Benjamin] Netanyahu has said Palestinians will not have a vote after the annexation … as has happened in the settlements. Israel has not listened to pleas and condemnations, so it’s time to take economic action.”

However, Purcell warned that if the bill is not included in the Programme for Government, Fine Gael will continue to veto it, “despite it being supported by all the other political parties and many Independents, Fianna Fáil, the Greens, Sinn Féin, the Social Democrats, PBP, the Labour Party, etc.” She explained that these parties represent over 70% of the electorate.

The three coalition parties are expected to discuss the bill over the coming days and hope to conclude the process of forming a new government soon.