Just one person was arrested, according to the Washington Metropolitan Police Department, a contrast from riots days earlier that resulted in widespread looting, a church arson and tear gas wafting through a park near the White House..
By Ford Fischer June 7, 2020
Facebook
Twitter
Linkedin
Email 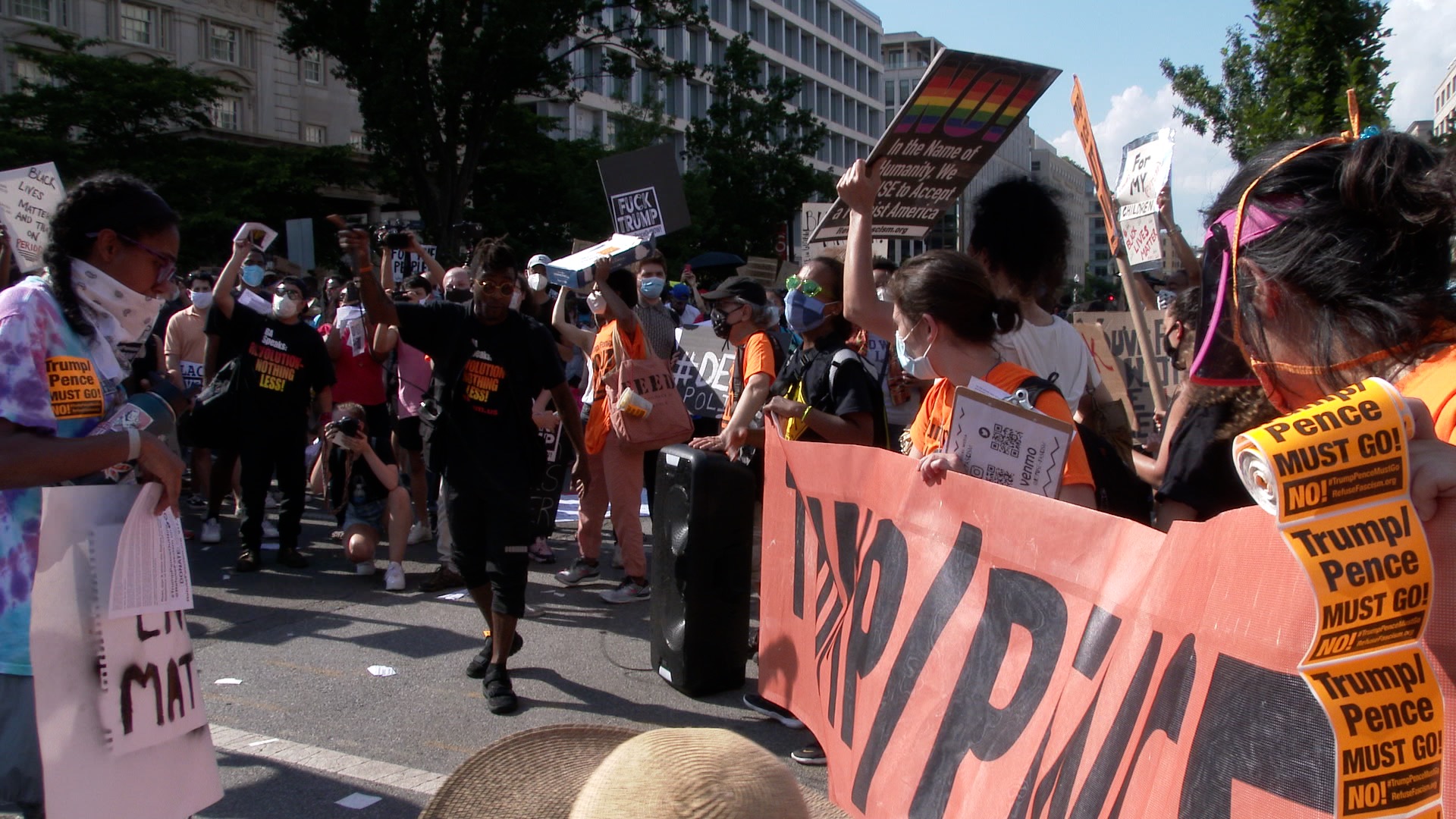 Washington — Thousands marched and protested against police brutality in Washington, D.C. on Saturday, keeping the May 25 death of George Floyd on the White House’s collective mind by demanding the city defund its police force.

Just one person was arrested, according to the Washington Metropolitan Police Department.

Derek Chauvin, a white police officer, is charged with killing Floyd, a 46-year-old black man, during an arrest in Minneapolis.

Rioting there began less than a day later and quickly spread to other American cities. Clashes between police and protesters escalated quickly in Washington.

Bowser’s order included a paint job on the pavement large enough to be seen from orbiting satellites, according to Planet Labs, a private imaging company.

“We’ve walked this path before, and will continue marching on, hand in hand, elevating our voices, until justice and peace prevail,” Bowser said.

For members of Black Lives Matter DMV—the letters refer to D.C., Maryland and Virginia, not the motor vehicles bureau—her gestures were not enough.

The group claimed responsibility for adding the anti-police message to the road, which is technically still called 16th Street.

Saturday’s almost univerally nonviolent protests included a prayer service led by a man at a piano.

“God, I see people who walk as activists in love and justice and mercy and humanity,” recent Princeton University graduate Mikal Walcott prayed aloud. “God, would you set free people so that they may set free others?”

“When I see the civil rights movement, all those people were people of God,” Walcott told Zenger News. “As you can see behind me, people are being touched and transformed by the Holy Spirit.”

Behind him, two women who attended his service embraced and cried.

Others shoiuted louder and with less optimism.

Members of RefuseFascism, a project of the Revolutionary Communist Party USA, shouted “Fuck Trump! No KKK! No fascist USA!”

“How long will it be before the Trump regime falls because of you?” he asked the crowd. “It’s going to take each and everyone one of us being out here. That’s where this shit needs to go.”

“George Floyd ain’t have to die!” he chanted in a call-and-repeat. “We all know the reason why.”

“We are at a serious crossroads.  Trump is not just speaking the language of fascism, but in calling out the military in D.C. and threatening to do so nationally, Andy Zee, one of the group’s leaders, said.

Zee blamed Trump for encouraging what he called “fascism, white supremacy, xenophobia and patriarchy wrapped in the Bible and the American flag,” said Andy Zee, who insisted that “removing” the president from office on election Day will be “too late.”

The New Black Panther Party led its own march.

“Black power!” his group chanted while marching to a newly erected fence in front of Lafayette Park, outside the White House. Shabazz’s call-and-response concluded with protesters shouting for justice “by any means necessary!”

Some of his followers wore face masks depicting rifles and the insignia “Fred Hampton Gun Club.”

Police in Chicago killed 21-year-old Hampton and another Black Panther Party activist in December 1969 during a pre-dawn raid that the Cook County state’s attorney claimed was the result of an earlier gunfight instigated by the pair.

National Guardsmen were deployed Saturday on Washington street corners, but no violence erupted of the sort the city saw a week ago.

Widely seen video footage shot on May 25 showed Chauvin, now in custody and facing murder charges, kneeling on Floyd’s neck for nearly 9 minutes. Floyd pleaded “I can’t breathe” while three other officers stood by. He was pronounced dead at a nearby hospital.