Same-sex couples celebrated the change, which had been in the works for years.
By Daniela Calvo June 1, 2020
Facebook
Twitter
Linkedin
Email 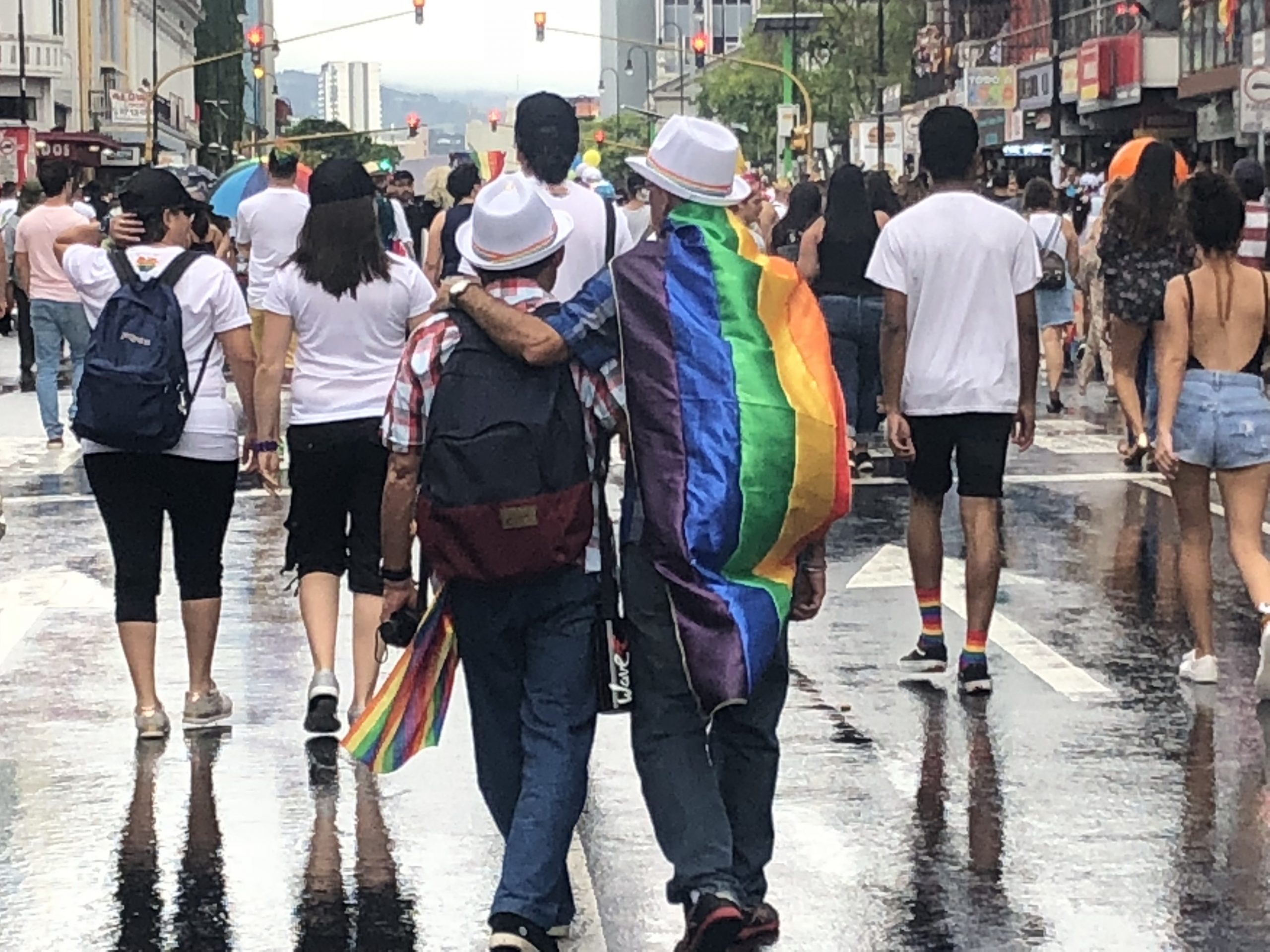 Members of the LGBT community participate in a "Pride Parada" in San Jose, Costa Rica on July 1, 2018. (Daniela Calvo/Zenger)

For the past 5 years, Laura Flores and Jazmin Elizondo fought for their union to be accepted, and after insults, threats, lawsuits and lots of patience, they find it hard to believe that their struggle is over.

The two met in 2014 in Flores’ restaurant. Elizondo was saving money to move to Mexico, and Flores allowed her to live in one of the restaurant’s rooms until she had enough money to move.

Their relationship grew. Flores discovered that, thanks to a clerical error, Elizondo was wrongly registered as male when she was born. The mistake was never corrected as she grew up—giving the couple the opportunity to legally get married in 2015 as a male and a female, even though both are women.

This decision would set them in the public eye for the next 5 years, and turned their relationship into a symbol for both pro- and con-gay rights groups in Costa Rica, a country in Central America with about 5 million people.

The first-time sexual diversity topics entered politics in Costa Rica was during the elections of 2001. Since then, political parties have used gay and lesbian issues to negotiate political positions.

“Perhaps the majority of the population is unaware, but for many years the LBGTIQ community has been the currency of exchange in reference to the formation of the board of the National Assembly. It was negotiated from below not to pass any project in defense of human rights, which is why alliances were made to get the votes for board positions, ¨ said gay rights activist and lawyer Geovanny Delgado, referring to the gay community.

In 2018, during ex-president Luis Guillermo Solis’s term, the Inter-American Commission on Human Rights issued a statement that Costa Rica and other 11 countries members of the San Jose Pact, should legalize same-sex marriage.

Since the election and the beginning of this administration, executive officials have made their support for same-sex marriage clear. The Constitutional Chamber declared May 26 the deadline for the approval of same-sex marriage, based on the Inter-American Commission on Human Rights statement.

Getting married doesn’t mean just the act of marriage, for some legislators. It presents a legal uncertainty that the proposed legislation has not fixed. It might cause other problems once the government approves same-sex marriages, said one lawmaker.

“With the legal loopholes that exist, our regulations are made for a marriage between a man and a woman. For example, how do you operate in cases such as the matter of parental authority, domestic violence between two women, or what last name would they take first? Those are things that have not been clarified and that have to be reformed and unfortunately create a terrible legal uncertainty—hence the time that has been requested to postpone the project,” said legislator Erick Rodriguez, from an independent political party.

But legislators waited until the last minute to present a motion to postpone the approval of same-sex marriage until 18 months after the COVID-19 emergency had passed, and did not pass it ahead of last week’s deadline.

“The derogation from the marriage of people of the same sex should be arranged in harmony, what the deputies do is bustle so that their voters see that they are opposing, and if they don’t have the necessary studies, you can no longer do anything, because marriage will rule and then you see how the other problems are going to be fixed,” said Marco Castillo, a lawyer and gay rights activist.

But the inaction is a win for Flores and Elizondo, and couples like them. As Flores put it, every change will help build a better era and bring equality and human rights.