"Our food has long finished. I have no money and I am contemplating to go back like others, because I will die of hunger here," said one refugee.
By Calistus Bosaletswe May 22, 2020
Facebook
Twitter
Linkedin
Email 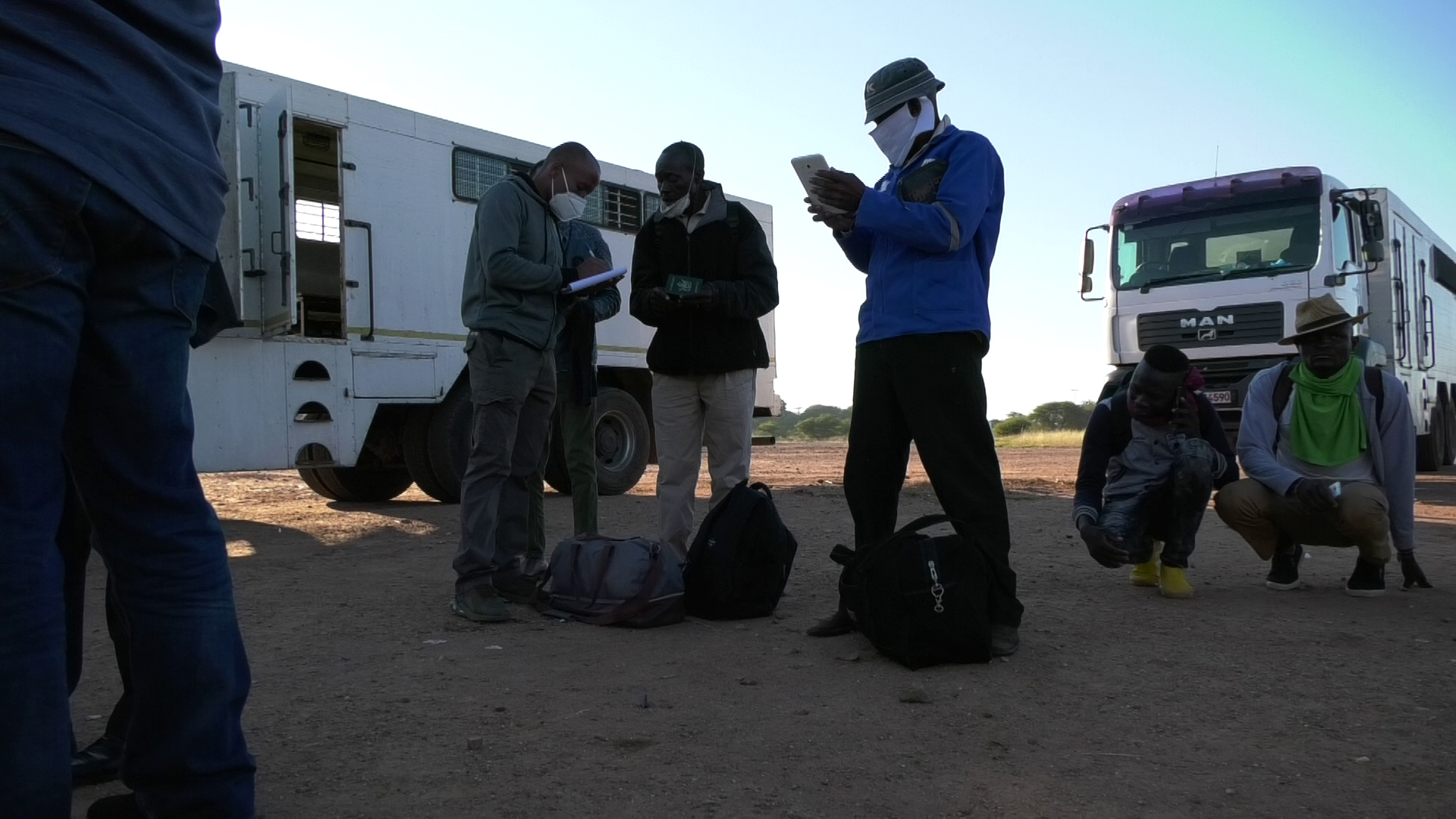 Zimbabwean immigrants who were stranded in Botswana after going for months without food during COVID-19 pandemic and lockdown restrictions produce their travel documents before boarding government vehicles that Botswana provided for repatriation in the capital city of Gaborone, Botswana on May 13, 2020. (Photo Courtersy: INK Centre for Investigative Journalism)

GABORONE—A human rights group said hundreds of refugees from Zimbabwe are being forced back home from neighboring Botswana and the refugees haven’t had access to food during COVID-19 restrictions in Botswana.

Botswana has 24 confirmed cases of COVID-19, and its government has restricted travel, prohibited gatherings of more than 100 people and implemented distance guidelines between people at public places. The outbreak in the country started March 31.

The government has downplayed the recent move, arguing it is a voluntary repatriation. Hundreds of economic refugees who fled economic hardships and political unrest from neighboring Zimbabwe to Botswana have been living in Botswana legally while others are illegal immigrants.

Botswana Network on Ethics, Law and HIV and AIDS Executive Director Cindy Kelemi is not convinced that most Zimbabweans are opting for volunteering repatriation, and asked Botswana to provide food relief to the refugees.

“We wrote a letter to the government advising them that there was a need to provide food relief. They were badly affected by the COVID-19 pandemic and lockdown restrictions. Most of them who ply their trade in the informal sector were unable to make money and they had no access to food,” Kelemi said.

“If you are dying of hunger, you can only decide to go and die in your country. We cannot say they are volunteering to go back,” she said.

Botswana has established a COVID-19 fund which supports efforts towards fighting the pandemic, but no funds from it are being spent on refugees.

Zimbabwean refugee Khetiwe Moyo shared a harrowing experience of how she and other Zimbabwean have been going for days without eating.

Moyo, who shares a room with her cousin in a house close to the capital city Gaborone, said she is worried about eviction.

“Our landlord has warned us about possible eviction. Our food has long finished. I have no money and I am contemplating to go back like others, because I will die of hunger here,” said Moyo, adding if she had food she would stay.

Zimbabwe itself is facing constant scarcities and conflict.  Government controls and hyperinflation from too much currency printing have caused shortages in gasoline, electricity, water and food.  In January, the southwestern African nation was named a humanitarian food crisis by the United Nation’s World Food Programme.  Protests against higher fuel prices last year were met with a violent government crackdown, and just days ago activists were kidnapped and attacked after protesting food shortages.

Cephas Tshuma, originally from Zimbabwe, told Zenger News that he has so far assisted 11 Zimbabwe nationals with food baskets.

“They happened to have communicated with someone in Zimbabwe who then referred them to me. Since I have been doing community work, I was able to raise funds with the help of church members. It was not enough but we assisted a few of them with food baskets,” he said.

Kelemi, from the human rights group, criticized Botswana’s refusal to provide food aid to those from neighboring countries, arguing that immigrants in the country operate businesses and have children in school. Many refugees pay taxes and should receive food aid, she said, adding that Botswana is receiving donations from organizations and private companies.

Her group is working with other development partners, including Childline Botswana, to help refugees currently isolated in their homes as Botswana goes into the second month of lockdown.

“Already we have a database of foreign nationals who have asked us to help them because they are dying of hunger in their homes. We have since helped more than 20 families,” said Kelemi.

Botswana’s top officials have dismissed claims that the repatriation is not voluntary, pointing out coordination with the Zimbabwean Embassy in Gaborone.

Gaimelwe Goitsemang, a spokesperson for the Ministry of Foreign Affairs and International Cooperation, said the Zimbabwe Embassy made a request for assistance facilitating the repatriation of Zimbabweans.

“A request came through a diplomatic channel. We offered help after assessing the situation, looking at that we have cooperation with Zimbabwe,” he said.

Goitsemang indicated that even if the government of Botswana was willing to help, the lack of economic activities due to COVID-19, makes it difficult for the government to extend a helping hand.

“Batswanans were also complaining that they have not received food baskets. The request was appropriate since the request was done through diplomatic channel,” said Goitsemang. “We acceded to their request since foreign nationals were unable to access food due to lockdown.”