The attacks on Christian villages by militant Muslim herders are part of an escalating conflict. 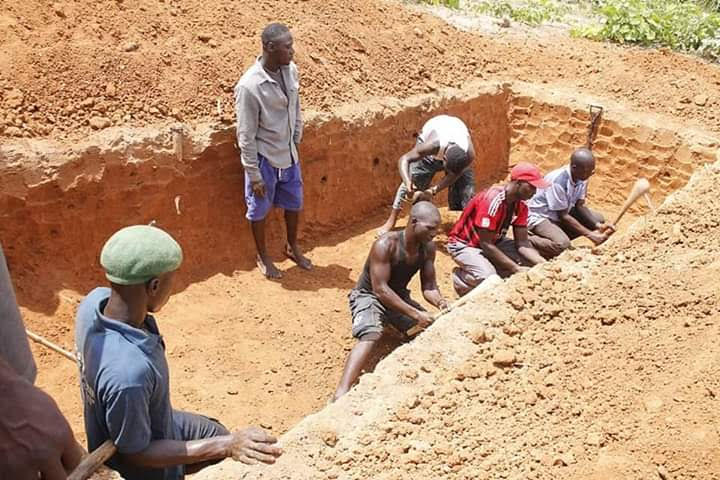 Grave diggers in Mikhayla, Nigeria prepare ground for the burial of villagers on May 13 killed by Fulani terrorists the previous day. (Photo Courtesy: Usman Stingo)

Members of the Fulani tribe have targeted and killed 28 Christian villagers in north-central Nigeria as attacks in the region continue to escalate.

“Fulani gunmen were shooting sporadically and shouting, ‘We are looking for those alive to kill’,” said Amos Samuel, a 35-year local farmer in Gonan Rogo, a village in Kaduna state. The attacks began about midnight last Tuesday.

The 17 victims, mostly children and elderly people, were shot and sliced with machetes during the one-hour raid in one of the infamous killing grounds of Kaduna state.  At least six are recovering from wounds in the village of 400 Christian families, 31 miles southeast from Kaduna City and about three hours north of Abuja, the nation’s capital.

The attack was followed the next day by a similar raid killing 11 villagers. The community believes the Fulani were also responsible for this second attack, said Stingo Usman, a community leader and political candidate in the Kajuru Local Government Area, where Gonan Rogo is located.

“The attacks in Adara Land are becoming more regular than ever and simultaneous,” he said.

“Hardly had we departed from the scene of the mass burial at Gonan Rogo in the evening of May 12 when the villages of Idanu-Doka and Ungwan Rana-Doka were attacked by the same group that attacked Gonan Rogo,” he said.  “The terrorists numbered approximately 100 men, half of whom carried AK-47 rifles or pump-action shotguns.”

To survive the first attack, said Samuel, he and his family hid in a room and did not go out during the terror attack.

“We had just gone to bed when the attackers started shooting and shouting that they have come to kill. I knew they were Fulani men because of their Fulani-accented Hausa language they were shouting in. And besides that, our area had been attacked many times by Fulani militia in the past two years,” said Samuel.

“The shooting created panic and those who step out of their house to run into the bush for safety were shot and then cut with machetes. Others were followed into their homes and shot dead.

“Later, the young men in the village mobilized and those with shot-guns started firing. This was what made the armed gunmen retreat eastward from the village,” said Samuel. He said that some members of the Nigerian military came to the village around 2 a.m., but the attackers already had left.

“I woke up to the sound of gunshots and Fulani men banging on locked doors, asking the people to come out,” said Florence Jonathan, 17, whose father teaches at the village primary school. “We didn’t open our doors, and we thank God that they didn’t break them. They did break some door locks and killed our neighbors inside their rooms.”

The Fulani, a group of about 7 million people, are widely viewed as the largest semi-nomadic tribe of traditional herders in the world and are the home tribe of Nigerian president Muhammadu Buhari. For years, the Fulani and Hausa, the largest tribe in Nigeria of 25 million people and established farmers, have fought over land use and water.

This conflict further escalated as the Fulani herded south into farmland largely dominated by Christians as drought worsened and grazing areas disappeared. As the Fulani-Hausa conflict has grown and the Fulani attacks against Christians have escalated, the violence has deepened with numbers killed surpassing those killed by extremist group Boko Haram.

The two-day toll of carnage was 28 people.

Americans increasingly are concerned about the rising tide of violence in Nigeria.

“I am particularly concerned at the deteriorating situation in Nigeria under President Muhammadu Buhari, who has failed to protect all Nigerian citizens equally,” wrote Rep. Chris Smith, R-New Jersey, referring to the annual report of the U.S. Commission on International Religious Freedom Report on April 30.

“The Buhari Administration’s response to repeated attacks upon Christian farmers in the Middle Belt by Fulani herdsmen ranges from indifference to active acquiescence.  The herdsmen–and it seems, people at the highest levels of the Buhari Administration–appear driven by ethnic and religious supremacism,” he said.

Smith supported the commission’s designation of Nigeria on a watch list of nations failing to protect their own citizens. The commission’s chairman, Tony Perkins, and others on it have warned repeatedly that Nigeria is on the brink of a meltdown and are supporting an awareness campaign launched by the International Committee on Nigeria called “Nigeria’s Silent Slaughter.”

Nigerian expatriate leaders also reacted with shock. “Jihadist killers will not even respect the Ramadan period and without mercy hack to death people suffering from the impact of COVID-19,” said the Rev. Sunday Bwanhot, national president of the Evangelical Church Winning All in Chicago in a written statement.  Bwanhot heads the U.S. branch of the denomination hardest hit by herdsmen attacks.

“We condemn this evil  practice and call on the U.S. government, all nations and the government of Nigeria to step up and stem this evil tide,” he said.

The executive director of the International Committee on Nigeria, which is based both in the U.S. and Nigeria and documents all sectarian killings in the country, also expressed concern.

“Fulani militant and Boko Haram attacks since April 1st have caused more than 250 deaths and displaced thousands,” wrote Kyle Abts. “At least 200 kidnapped or abducted by this relatively new category, so-called bandits.  Yet, our data sources indicate they are Fulani militants or other Islamic terrorists seeking funding or intending to intimidate. In March alone, there were more than 500 deaths, and the majority of these were attributed to Fulani militant attacks.”