Many Cameroonians believe the punishment is intended as a warning to Anglophone intellectuals.
By Colbert Fulai May 18, 2020
Facebook
Twitter
Linkedin
Email 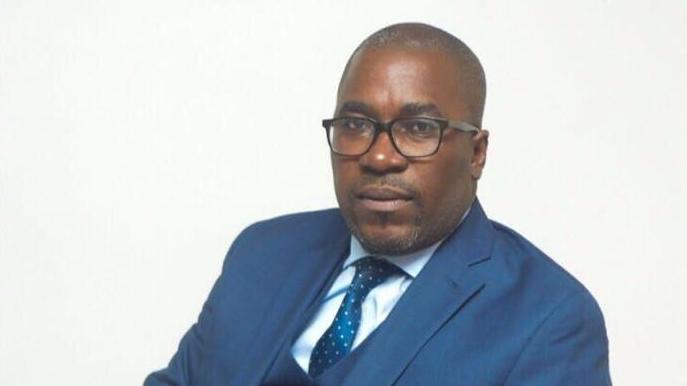 Dismissed University of Buea Lecturer Felix Nkongho Agbor Balla poses for a photo at his residence in Douala, Cameroon on May 10, 2020. (Colbert Gwain/Zenger)

Cameroon’s University of Buea suspended a law instructor more than a month after he asked students a legal question during a political and constitutional history course.

English Law lecturer Felix Nkongho Agbor Balla posed level two law students the following: “The Anglophone crisis since 2016 was caused by the lawyers’ and teachers’ strike. Assess the validity of this statement.”

The question was part of the first semester examinations just before schools closed on March 17, as part of a government-wide lockdown against COVID-19.

The University of Buea, located along the coast in western Cameroon, is an English-speaking university in a predominantly French-speaking central African region. The question tapped a growing divide between the minority Anglophone and majority Francophone populations, which made up two countries until they united into the Federal Republic of Cameroon in 1961 and eventually the United Republic of Cameroon under a new constitution in 1972.

Rumors to remove Agbor Balla, also a former United Nations human rights officer, from the teaching staff circulated for a month after he asked the question. Finally on April 20, Cameroon’s higher education minister, Professor Jacques Fame Ndongo, urged the university’s Vice Chancellor Horace Manga in a written memo to suspend the lecturer for “breaching the university’s code of ethics and conduct.”

Manga summoned Agbor Balla on May 5 to appear before a university disciplinary council the following day to answer questions on the course, called “Political and Constitutional History of Cameroon,” and specifically the question he posed.

“Should I honor the said invitation, which is a manifest and gross violation of the law, it would amount to setting the wrong precedent, which would hurt and have a negative impact on teachers who in the future may be invited without any regard for due process to appear before the disciplinary panel and the long term credibility of our institution,” said Agbor Balla in a written response to the university summons.

The disciplinary council met on May 6 without Agbor Balla.

“Cognizant of Question 1 set on the course LAW entitled ‘Political and Constitutional History of Cameroon’ which violates Articles 40 and 42 of Decree N0. 93/027 of 19 January 1993, the contract of Felix Nkongho Agbor Balla, recruited as Instructor in the Department of Law…is hereby terminated with immediate effect,” wrote Professor Nol Alembong, deputy vice chancellor.

“Being invited to a disciplinary panel was a privilege Buea University accorded him on humanitarian grounds, since he had run out of contract,” said Professor Ernest Litia Molua, registrar of the university.

Hired on a two-year contract in 2015, the university had extended a verbal agreement to allow Agbor Balla to continue teaching until now.

“The University of Buea extended to him a verbal gentleman collaboration, which he has finally abused by intoxicating 17 and 18 year old students on his political showmanship,” said Molua.

“I don’t discuss politics in the classroom. I believe this may just be a pretext to penalize me for human rights activism,” said Agbor Balla, founder of the Center for Human Rights and Democracy in Africa, and former leader of the outlawed Anglophone Civil Society Consortium.

Agbor Bella had been arrested on Jan. 17, 2017 on terrorism charges, specifically for igniting the escalating Anglophone minority conflict in Cameroon, only to be released a year later through a presidential pardon. A few months ago, the government accused he and other human rights defenders for providing information of military atrocities to Human Rights Watch and other foreign organizations.

His suspension has touched a nerve, and continues to stir debate and controversy in academic and government circles as schools anticipate reopening on June 1.

“The dismissal of Barrister Felix Agbor Balla as instructor at the Anglophone University of Buea seems to have all the hallmarks of the Anglophone-Francophone divide in Cameroon,” said John Menkefor, a commentator based in Bamenda, headquarters of Cameroon’s North West Region. “Why did the higher education minister not raise similar concerns when francophone lecturers in law and political science departments in other Francophone universities set more challenging questions on the Anglophone problem?”

“This suggests one thing: that the two parts are held to two different standards, defined by unspecified political considerations. These considerations can be partly conceived and used as instruments of political control of Anglophones,” said Menkefor.

Many Cameroonians believe the punishment against Agbor Balla is intended as a message to Anglophone intellectuals to watch what they think, say, do or teach.

Until a few years ago, Anglophones and Francophones maintained a relatively peaceful coexistence. In the past few years, the divide has sharpened as poverty and unemployment have risen. The government accused the Anglophones, about 16% of the population, of wanting secession and terrorizing civilians, which the English speakers denied.

Pressing the point, the government used military force to burn villages and kill unarmed civilians, launching the once peaceful country to the brink of civil war. Hundreds have died and been displaced while activists—including Agbor Balla—have been jailed.

“If issues of Anglophone history and identity are barred from classroom analysis, the reasoning seems to go that younger generations of Anglophones will grow up without the full consciousness of their history and identity. This way, the consciousness that gave rise to the events of 2016 in Cameroon, and largely powered by youths, may be suppressed or significantly diminished,” said Menkefor.

About 60% of Cameroonians are younger than 25, and more than 77% of the population is literate—a high percentage in the region.

Others believe something different is behind the disagreement with suspending Agbor Balla.

“University has never suppressed debate on the Anglophone problem,” said Molua. “The uproar about the examination question was raised by the students themselves immediately when they left the examination hall, as they felt that Mr. Agbor Balla, the instructor could be biased in grading their scripts, since he was a stakeholder and principal actor in the 2016 events he required the students to address and discuss.”