“God is in control and not the government, amen?” said Pastor Danny Shelton of Branch Baptist Church in Gladys, Virginia. “It doesn’t matter what anyone else says. It matters what God says.” 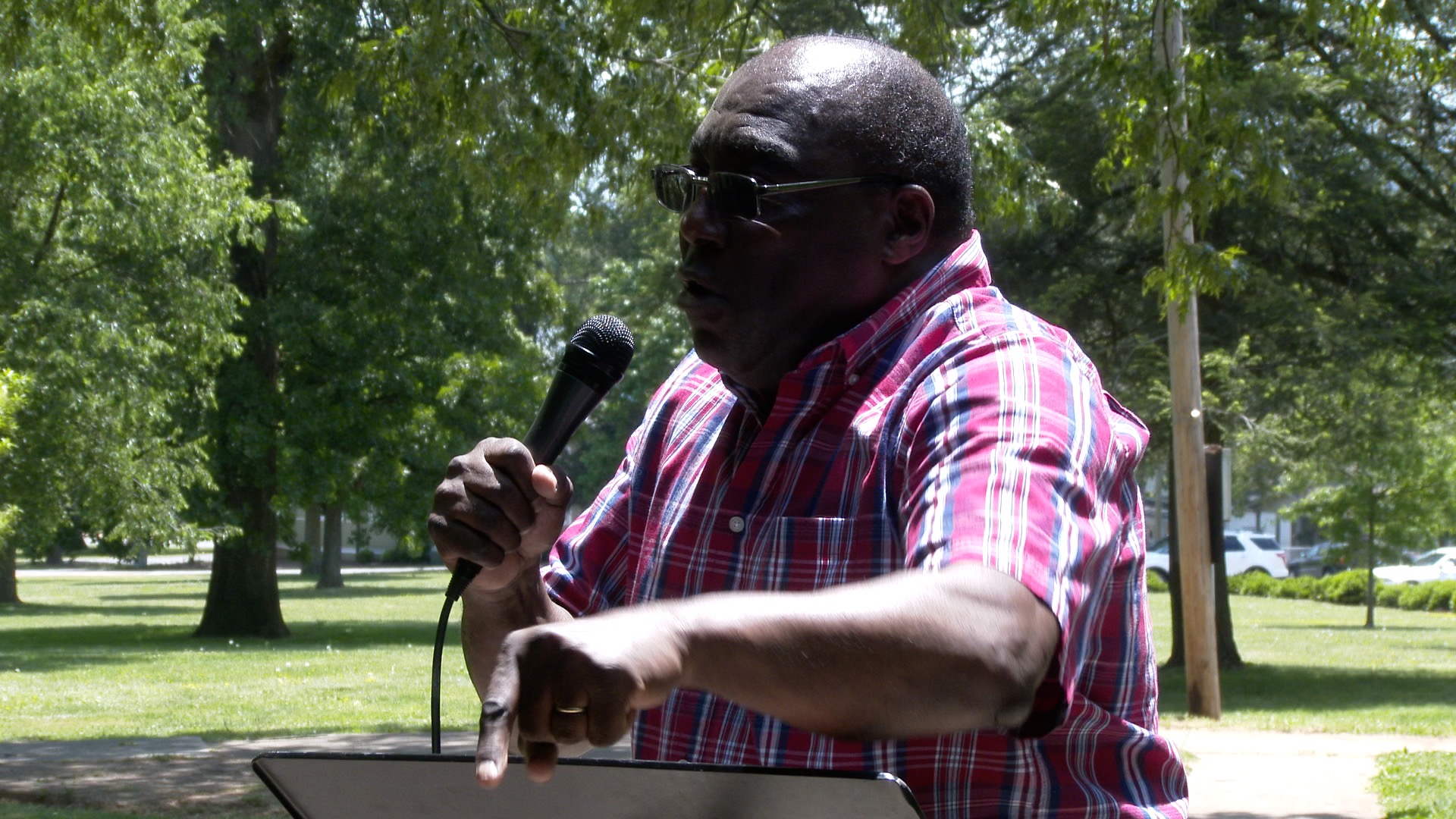 Pastor Earl Wallace of Liberty Christian Fellowship in upstate New York speaks to about 50 conservative Christian activists attending a "Pray for Virginia" event on May 16, 2020 at Miller Park in Lynchburg, Virginia. (Ford Fischer/Zenger)

Virginia Gov. Ralph Northam put an executive order in place on March 30 because of the COVID-19 pandemic requiring residents to stay at home with exceptions for jobs and activities deemed “essential.”

Religious events are allowed under the order, but only with up to 10 people in attendance regardless of social distancing measures. Similar restrictions do not apply to businesses that are allowed to remain open. For some activists, this amounts to a ban on practicing religion in their house of worship.

About 50 participants showed up to pray and mingle—sans social distancing or masks—under a gazebo in Lynchburg’s Miller Park.

“We looked at the situation in our country and the fact that the churches couldn’t be open,” said Daniel Abbott, the event organizer. “We know that the Bible tells us that if we expect God to heal our land—which it tells us that he can and will do—it’s because the people pray.”

“We want our land to be healed, so here we are,” he told Zenger News.

Abbott says local police heard about the planned event and reached out Wednesday to facilitate a group receiving a permit. In spite of the gathering exceeding the limit imposed by Governor Northam’s executive order, police did not disrupt the event.

“God is in control and not the government, amen?” said Pastor Danny Shelton of Branch Baptist Church in Gladys, Virginia. “It doesn’t matter what anyone else says. It matters what God says.”

Shelton is one of several clergy who showed up to the event who has refused to stop preaching, even when it violates the 10-person limit.

In an April 14 post on the church’s Facebook page, Shelton said his sanctuary is being sanitized weekly, and that hand sanitizer, face masks and gloves would be available at services.

“What is more remarkable is that many churches have obeyed that unjust order to abstain from worship in the Lord’s table,” the Rev. Paul Michael Raymond told the attendees Saturday.

Raymond is the pastor of the Reformed Bible Church in Appomattox, Virginia, which has not shut down during the pandemic.

“We did take precautions,” Raymond told Zenger. “We separated everyone. Of course, all the churches that were closed down—they all came to us.”

While many participants described the executive order as “tyrannical,” Raymond expressed a willingness to work with government while staying open.

“We worked with the judges to make sure we were in as much compliance as possible without overreaching,” he said. “We didn’t want to be rude, and we didn’t want to be antagonistic or arrogant, but we do not want the state to tell the church they cannot worship.”

“The state has tried to dictate how, when, and where the church worships,” Raymond told attendees at Saturday’s event. “They even had the audacity to claim that the worship of God was unnecessary and by law made it a crime to gather while Walmart and Lowes and Home Depot and Sam’s Club could have people come in en masse.”

An attendee shouted out that liquor stores and abortion clinics are open. The stores are run by a state agency and clinics are allowed as medical facilities.

“You name it. This is hypocrisy. It is insanity,” said Raymond.

Participants and speakers at the event did not wear face masks. The Centers for Disease Control has recommended their use since April 13.

Raymond said that he believes masks are not only ineffective, but part of the road to authoritarianism.

“What’s interesting about the mask is it depersonalizes people. We’ve become a depersonalized people,” he told Zenger. “That’s what tyrants do. They depersonalize the people so they can control them without having any conscious issue.”

With the exception of a single individual openly carrying a handgun and wearing a T-shirt portraying Trump as the fictional T-800 from the “Terminator” film franchise, national political figures were not a prominent subject among the rally’s attendees.

In fact, Pastor Earl Wallace told the crowd, “We’ve got to get rid of the Republican and the Democratic Party.”

“We’ve got to start a ‘Biblical Basis of Bill of Rights Party.’ If we don’t vote the Bible, who will?” said Wallace.

Wallace preached the Bill of Rights’ 10 amendments are analogous to the Bible’s 10 Commandments.

Wallace’s church, Liberty Christian Fellowship of upstate New York, doesn’t own its own building, but rather rents one. The building closed due to COVID-19.

“I literally have tried finding another place to rent and I can’t get another realtor to call me back,” Wallace told Zenger.

Wallace still preaches at events like the one in Lynchburg.

“I will not obey unconstitutional orders” Wallace told Zenger. “They’re lying to us about the virus. I will not comply.”

“We are doing the work and we are not social distancing when we do it,” he said.

The stay-at-home executive order was originally slated to be in effect until June 5. Governor Northam announced on May 9 that he’d like to begin reopening certain areas of Virginia on May 15.

Last week, Northam delayed the planned reopening of certain counties in Northern Virginia until May 28.

So far, Virginia has had about 30,000 positive cases of COVID-19, according to state figures, and about 1,000 people have died.

The vast majority of Virginia’s cases have been been in Northern Virginia. New daily cases in the state have been declining since the beginning of May.