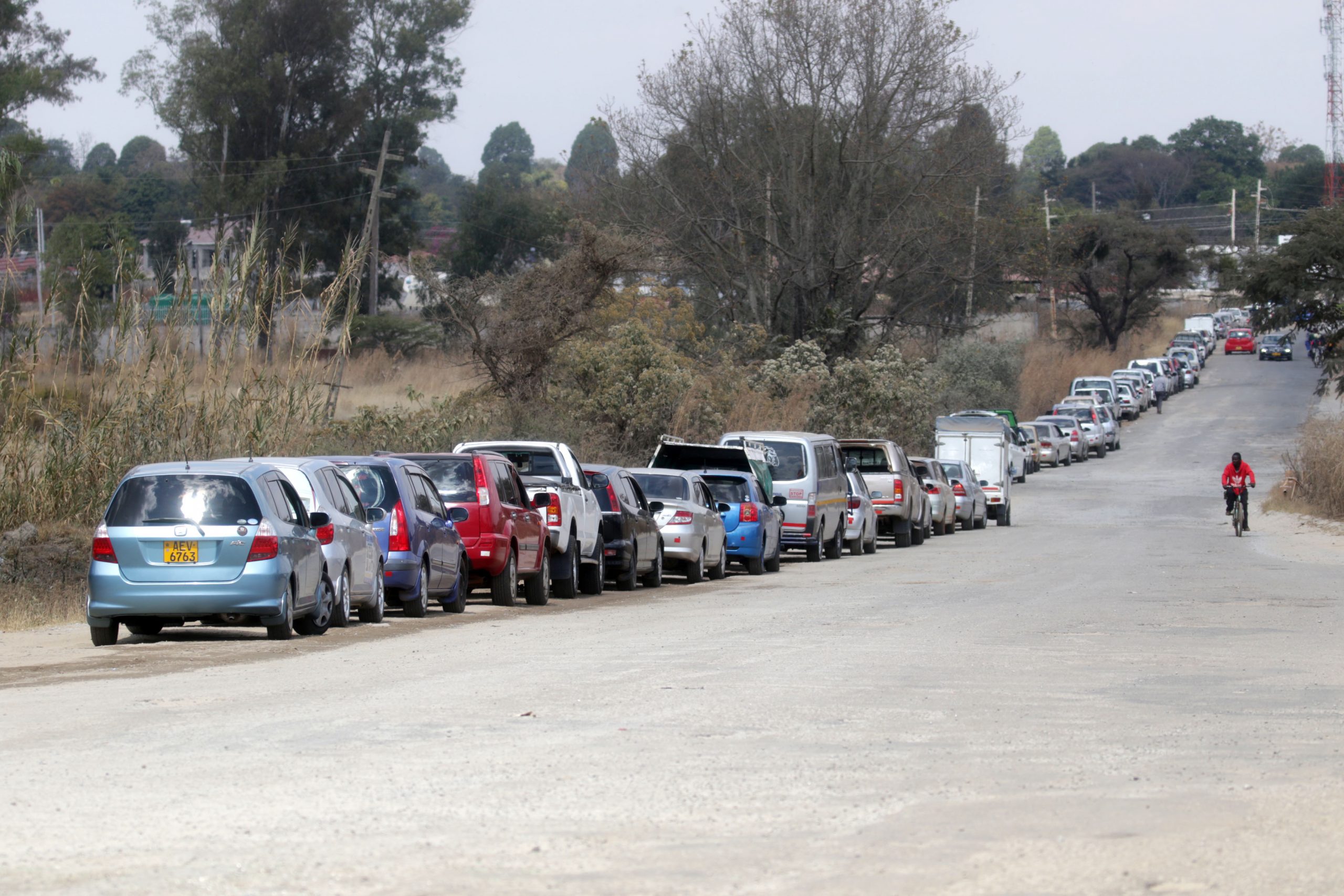 Cars line up for fuel in the suburb of Pomona, in Harare, Zimbabwe in early 2020. (Tatira Zwinoira/Zenger)

HARARE—Intergas Zimbabwe Chief Operating Officer Gift Chitanda remembers the day in 2019 when he had an interview for a potentially lucrative new client for the Zimbabwe firm.

The day before the interview, Chitanda had a problem: His car was extremely low on gasoline, and he needed a quick solution. After searching several service stations, Chitanda found one that had fuel, and joined the long, slow-moving line for his share.

Decades of rule by the late strongman leader Robert Mugabe threw the country’s economy in shambles.  Gasoline and food shortages exist across the country, and the southwestern African nation was named in January a hotspot for a humanitarian food crisis by the United Nation’s World Food Programme.

Chitanda was forced to park his car overnight and walk home. The next day, he still had not made it to the front of the line, which forced him to miss the interview.

“Most of the time, we have cancelled jobs and deliveries because of fuel issues,” Chitanda said.

Autogas, a clean-burning propane fuel known at the U.S. Department of Energy as a liquid petroleum fuel, is used around the world, including in Europe and the United States.

In December, Intergas, in a partnership with Nigerian alternative energy company THLD Group, started preparing autogas for the Zimbabwe market.  That partnership, however, has been delayed by a COVID-19 national lockdown.

Over the past several months, Intergas has tested an autogas system by equipping and using it in six of its vehicles.

The autogas system allows a motorist to choose between gasoline or autogas as a main source for fuel. It involves installing a special gas tank, a fresh set of injectors, a vaporizer, regulator and a computer box to control how the autogas is distributed to the engine.

Intergas reports it has an initial target of equipping up to 15 vehicles monthly with the autogas system for a fee of between $700 and $1,300 to the motorist.

The December 2019 World LPG Association Global Roadmap for Autogas report said autogas is the most popular alternative to gasoline and diesel for passenger cars and vans worldwide, and that the clean-burning fuel is made up of chemically simple and pure hydrocarbons, mixing easily with air and allowing almost complete combustion.

“Petrol deposits more impurities into the engine including not burning completely whilst gas burns completely and does not leave impurities in the engine,” Chitanda said, pointing out autogas fueled vehicles require less frequent service. Petrol is another name for gasoline, and autogas is sometimes referred to as gas in Zimbabwe.

The latest government statistics from the Energy and Power Development Ministry in Zimbabwe show the country has a daily gasoline and diesel demand of more than 871,000 gallons and over 1.1 million gallons, respectively, which requires foreign currency to import.

The government controls prices for fuel in Zimbabwe, which is a source of major contention. When state-controlled pricing is instituted, the laws of supply and demand don’t apply, and the government decides how much to price items, not the free market. “As the [Zimbabwe] government printed money to pay its debts, prices began to soar until stores everywhere emptied and everyone became hungry. Water supplies ran dry and electricity cut out. No one could get any fuel. The Zimbabwean way of life was destroyed; ordinary people became destitute and millions fled the country,” wrote authors Philip Haslam and Russell Lamberti, in their 2014 book “When Money Destroys Nations.”

Fuel operators rely on a subsidy from the bank worth an average of $130 million per month to import fuel, according to the Reserve Bank of Zimbabwe. The bank gets this money from the 38% average it retains from foreign currency generated in Zimbabwe meant for fuel and other basic commodities.

The local SouthWestern Energy Association confirmed to Zenger News that of the 709 fuel stations in Zimbabwe, more than 260 of these were not getting any foreign currency allocations to import fuel.

While these difficulties persist in the fuel sector, they won’t for autogas, which currently has no government regulation or policy framework.  This allows autogas operators to import directly from foreign suppliers and can source foreign currency locally.

Only 70 percent of the autogas tank is filled because propane contracts and expands, according to Intergas Chief Marketing Officer Ivy Chibanda. She said special autogas fuel pumps must be used. The company has one in Aspindale, she said, a suburb of Zimbabwe’s capital, Harare.

Intergas is partnering with existing service stations to install these special pumps.

The autogas system has in built safety features that prevent the liquified propane from leaking or smelling during the process. Autogas is cheaper than gasoline or diesel fuel.

As a driver of an autogas vehicle, Chitanda said he’ll never have to wait in another long gasoline line.

«Previous Post
Nigerians take the law into their own hands to fight COVID-19»Next Post
Ashes instead of soap: Inside Zimbabwe’s COVID-19 fight