Missing data and a lack of testing could conceal which Brazilians are at risk. 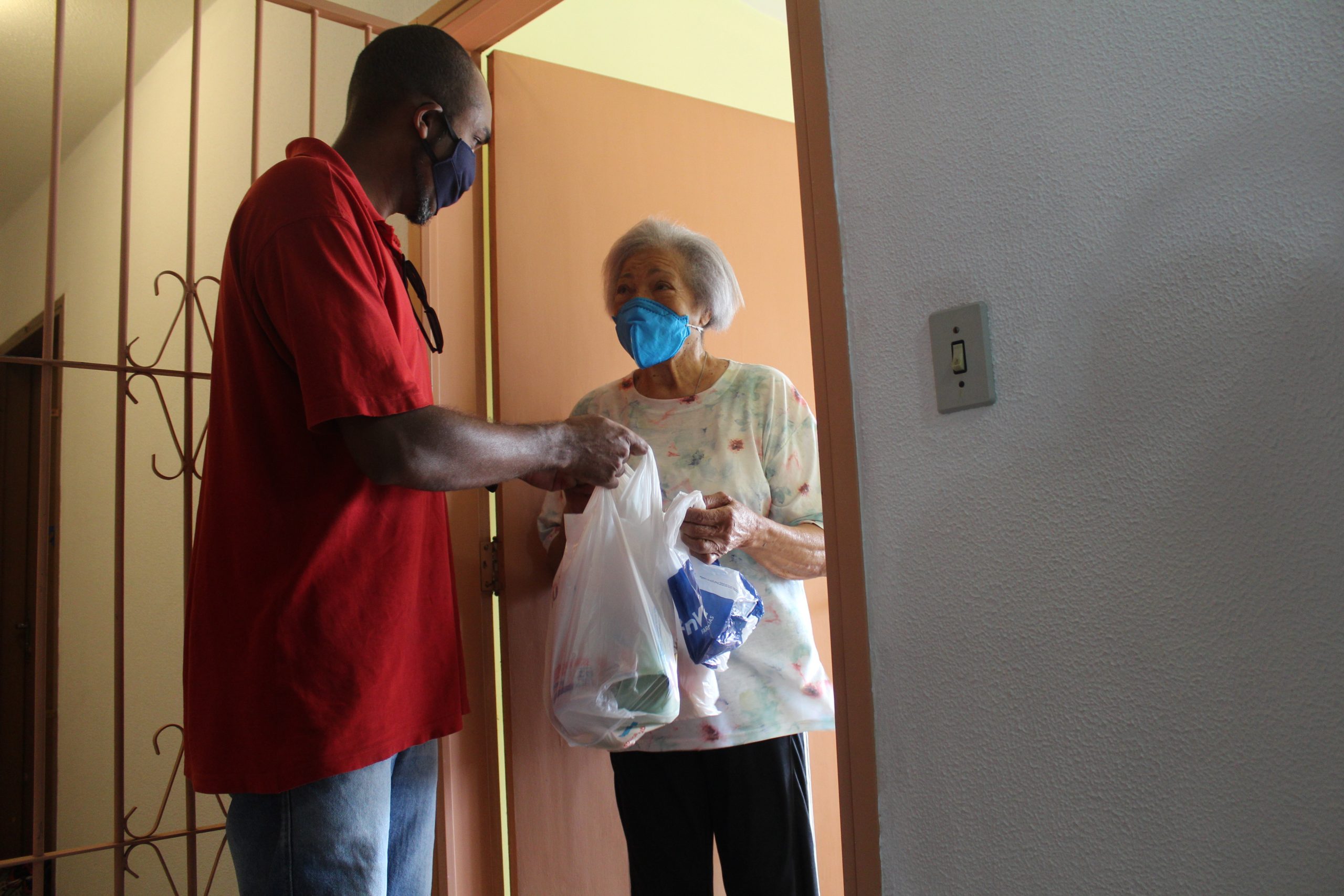 A neighbor helps with grocery shopping at least three times a week. He delivers two bags of goods on April, 27, 2020. (Luciano Nagel/Zenger)

Brazilians are dying from COVID-19, but the Health Ministry doesn’t know who they are.

Official numbers show black and multi-ethnic Brazilians, who make up about 32% of the population, account for one-third of COVID-19 deaths. That data, however, might not illustrate the full picture.

Public hospital registration forms do not ask about ethnicity. “New patient registration forms lack the information about the ethnicity of the patients that die of novel coronavirus,” said Dr. André Luiz Machado, an infectious disease specialist at Hospital Nossa Senhora da Conceição in Porto Alegre, located in the southern region of Brazil. A national notification system is used to register data on patients experiencing acute respiratory distress and COVID-19.

“It is alarming that there is missing concrete data regarding these facts. It is possible that the black and multi-ethnic population die slightly higher than a third of all patients admitted for COVID-19, just because there is a lack of information and registration in the forms of these ethnicities,” said Machado.

Dr. Denize Orneles, coordinator of the medical residency program for family medicine in Sao Paulo, confirmed the lack of data. “We have situations where more than 40,000 people have proven test positive to COVID-19.  Although gender is discriminated, color or ethnicity are poorly accounted for,” she said. “This information is used to evaluate people’s health in relation to the virus and the recommendation to hospitalization.”

The Brazilian Ministry of Health said it was unable to confirm the number of COVID-19 cases among black and multi-ethnic groups admitted to government-run hospitals. With the exception of the wealthier population, the majority of Brazilians use the public health system, which was revamped in 1994 with varying levels of success to include basic health coverage for all citizens.

The ministry has recommended all patients take the COVID-19 test, but not everyone has. “There are many reports describing victims in a serious condition arriving at the hospital, who died without the test virus being done,” said Ornelas.

Over two-thirds of the Brazilian population that die of COVID-19 have underlying conditions such as heart disease or diabetes. These health issues are more dominant in the black and multi-ethnic populations, which make up the majority of lower income households and still struggle to access basic health care. This is one reason why the published numbers on COVID-19 deaths by ethnicity seemed off, said Machado. “The population of black and multi-ethnic from Brazil have a higher risk of developing severe medical complications.”

With better information, “we can build a more accurate treatment plan,” said Machado.

Evidence of the discrepancy in reported numbers is evident in two districts of Sao Paulo, said Ornelas. “There is clear evidence of sub-notification of cases of poorer black and multi-ethnic communities due to their lack of access to testing.”

In the Tiradentes district, the majority of the population is black or mixed-race, generally poor and without access to basic hygiene and sanitation. In contrast, the Morumbi area of Sao Paulo in the Butante district hosts a university and a largely white and affluent population.

“While in Tiradentes, in the last week, we had 96 cases and 37 deaths confirmed or suspected,” said Ornelas, which is a 38% death rate. “On the other hand, in the Morumbi area, a noble part of São Paulo, we had triple the cases, that is 297, but only seven deaths.”

The health ministry continues to advise the population to stay indoors and follow social distancing restrictions to reduce of contamination of coronavirus. “More than 70% at the population Afro-Brazilians depends only on the Unified Health System. The absence of these basic structures makes the black and mixed-race population more vulnerable to COVID-19. How can we expect this population to do social isolation if the family lives in the house with only one room, without basic sanitation?” said Vera Beatriz Soares da Cruz, a social scientist from the Federal University of Rio Grande do Sul.

Concerned of contracting the virus and becoming a statistic, Dayssi Gonçalves da Silva remains in social isolation and confined in her small apartment in Porto Alegre city in southern Brazil. Suffering from diabetes, hypertension and most recently cancer, the 89-year old is in the high-risk group.

“I love to walk, but I rarely leave home due to my health. I clean my hands regularly, making use of alcohol gel to clean the supermarket packings. My neighbors are helping me to avoid getting out,” said da Silva, who hopes this epidemic will pass soon.

“In Brazil, the tested cases (happen) more frequently in whites than in blacks. But the blacks’ mortality is much higher,” said Deivison Faustino, a sociologist at Federal University of São Paulo.

“The president doesn’t believe in research and prefers to focus on the commercial and economic sides of it,” said Faustino. “Not long ago, the Brazilian government launched an advertising campaign called ‘Brazil cannot stop.’ Workers were called back to work to save the economy.”

While working as a nurse in the emergency room of the Conceição Hospital in Porto Alegre, Camila da Silva Zsabo never imagined she would be infected with the coronavirus and end up in bed in the intensive care unit where she normally cares for patients. The 32-year-old suffers from asthma and is mixed race, and believes the virus is more lethal for both those reasons.

“I am asthmatic, and at beginning of April, I felt a great lack of air, more than normal, followed by exhaustion,” she said. “That night I also had a fever and so the following day I went straight to ER and then intensive care. I thought I was going to die.”

Fellow medical workers clap for Camila da Silva Zsabo, one of their own nurses who contracted COVID-19 working in the ER of the Conceição Hospital in Porto Alegre, Brazil.#covid19 pic.twitter.com/SatcC7wfX9

She was treated with a ventilator, the antibiotic erythromycin and Tamiflu, widely used in the United States to treat influenza A and B. “I never smoked, although the doctor was shocked with my lung X-ray. It was horrible—seemed like a smoker’s lung,” she said. She was released after 10 days and is home on sick leave.

So far 163,510 Brazilians have tested positive for COVID-19, according to data compiled by Johns Hopkins University, and 11,207 have died.

«Previous Post
Malik Yusef raised more than $10,000 to help slow COVID-19 behind bars»Next Post
Nigerians take the law into their own hands to fight COVID-19