Two of the country’s leading women’s rights groups said they have received numerous reports of violence. 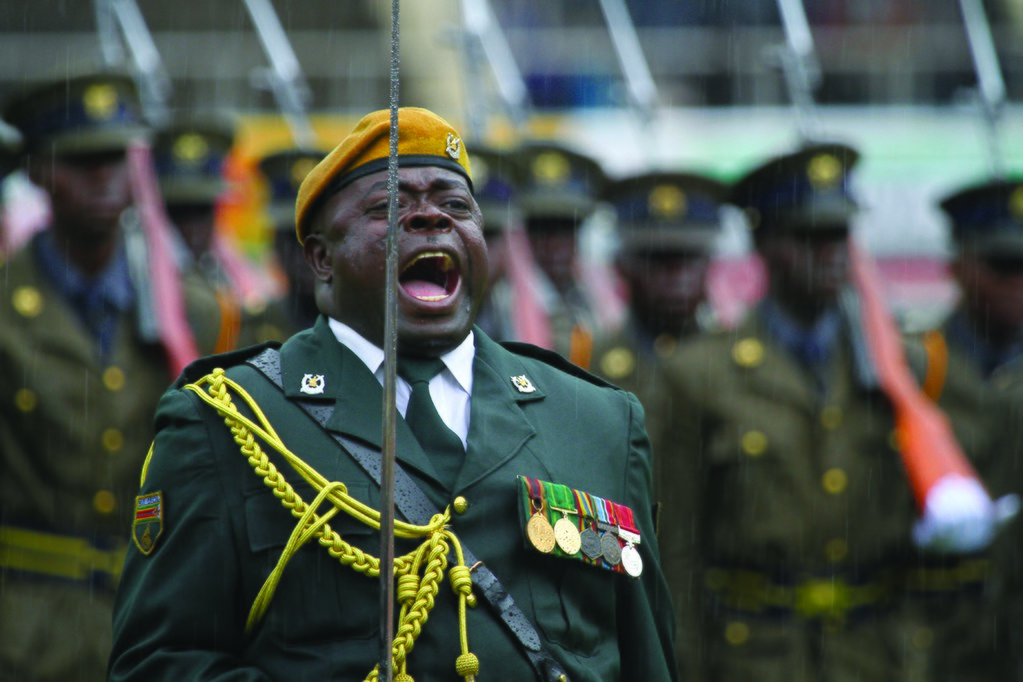 A Zimbabwean soldier participates in a national ceremony on April 18, 2015. (Photo: Darius Mutamba on CC 4.0 License)

As she sits on her lawn battered, bruised and bitten from an alleged assault from members of Zimbabwe’s army, Lucia Mashoko, aged 26, recounts a harrowing tale.

Around 8 p.m on the previous night, Mashoko said she was outside of the main house cooking when she saw people fleeing back inside the house.

When searching for what made them run, Mashoko caught glimpse of soldiers patrolling her street who were in the area to enforce Zimbabwe’s 21-day COVID-19 national lockdown begun on March 30.

“I was the last one to run inside the house, and just as I was getting in I noticed three of the soldiers followed and slapped me, and then forcefully dragged me from the house,” she said. “They took me behind the house and there I met dogs. One of the soldiers with the dog came to me and set it on my leg.”

The soldiers then took Mashoko to the street in front of her house where their vehicle had pulled up, and then dismissed her because she was “injured.”

“I had troubling sleeping as I could only sit in pain the whole night,” said Mashoko.

She said the reason she was cooking outside the house was because her family uses wood as fuel. There is no power to cook inside her Chikangwe township home, located in the Karoi District of Mashonaland West Province in north-central Zimbabwe.

Mashoko first narrated her story to the Zimbabwe Independent, a weekly newspaper, on April  6 in a 1.25 minute video clip, which has been posted online. Visibly shaken in the video, Mashoko’s story is part of a larger trend of violent acts being perpetrated by members of the police and army deployed during the national lockdown.

While there are no statistics as to how many of these such indecencies have occurred two of Zimbabwe’s leading women’s rights groups, Women’s Academy for Leadership and Political Excellence and Women’s Coalition of Zimbabwe, have received numerous reports of such practices.

Reports to these two organizations include police officers beating up women while they were laying on the ground.

“There are many cases so far recorded of state security heavy handedness on women,” said Sitabile Dewa, director of the women’s academy. “That’s why as WALPE continue to call for the setting up of the independent complaints mechanism against members of the security forces as stipulated by section 210 of the constitution.”

Ronika Mumbire, vice chair of the women’s coalition, also confirmed an increase in violence against women by state security.

“We have received some reports,” said Mumbire. “It’s sad that the easy target for gender-based violence is women. It puts them in a situation where they bear the brunt in cases of pandemics, conflicts etc. It is even very unfortunate when it’s coming from the security forces. There are ways of enforcing laws without being violent.”

Women are being subjected to violence n part because women are the primary caregivers in the household, the women’s academy said after conducting research. Current national electrical and water shortages combined with decreased access and poor food supplies at supermarkets mean women must search for firewood, water and food outside.

Searching outside the home for basic provisions means they are exposed to harassment.

“We can investigate such matters. You guys [journalists] are sending me videos of incidents happening outside Zimbabwe then claim it is being perpetrated by the ZDF,” said spokesperson Overson Mugwisi of the Zimbabwe Defense Forces. “Some of this is being exaggerated.”

Mugwisi then viewed Mashoko’s video. “I am not saying that it didn’t happen but do you think three soldiers who are in a crowd with police can come and just attack someone at their house?” he said.

The police were not involved in any acts of violence against women, said Zimbabwe Republic Police spokesperson Commissioner Paul Nyathi, and some of the reports were exaggerated or fake.

Both Mugwisi and Nyathi said no reports of assault against women from their organizations had been made. However, the women’s academy said incidents are not being reported because the perpetrators are the same people to whom victims are supposed to file a report.

The Zimbabwe security sector has been questioned by its citizens on other issues in the past.

Following a delay in Zimbabwe’s presidential results in the July 2018 election, a protest broke out in the central business district in Harare, the nation’s capital. In response, the government deployed the army to quell the demonstrations, which left six dead.

Violence against women by the security sector is part of a growing global trend. Where COVID-19 cases are most prevalent, United Nations Women reports a 30% increase in reported domestic violence cases and a 33& increase in emergency calls for gender-based violence. For the women in Zimbabwe like Mashoko, acts of violence are happening during growing uncertainty because of COVID-19 and deteriorating socioeconomic conditions.