Beyond Meat and its rivals rely on Chinese ingredients, opening food-safety debate in the COVID-19 era

Meat alternatives are increasingly popular with American consumers, who have sent sales surging over the last two months. 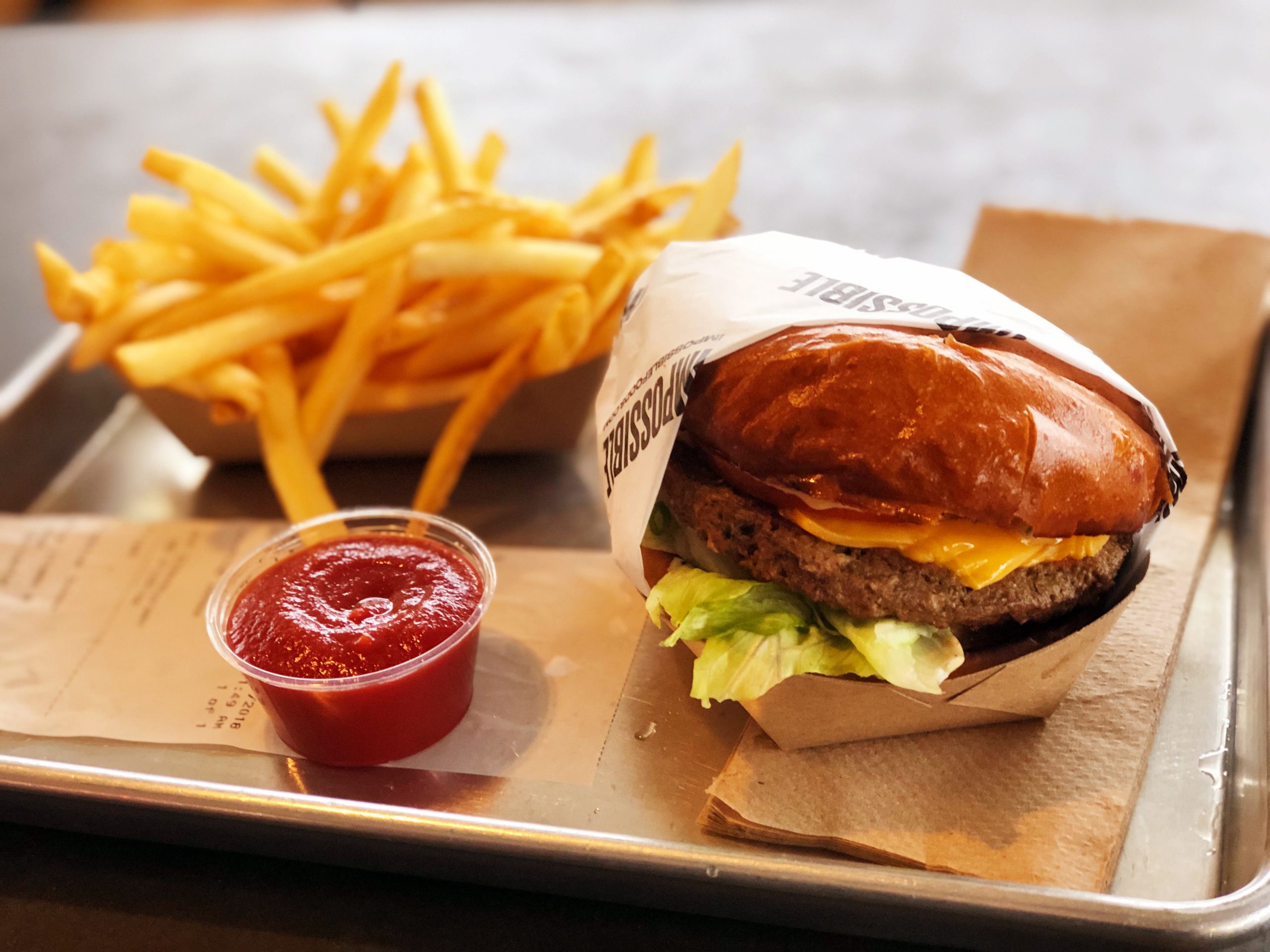 An Impossible Burger with fries and ketchup sits on a tray at Gott's Roadside in Napa, California. (Photo: Sarah Stierch on CC 4.0 License)

While America’s biggest beef and pork producers were nearly laid low in April by COVID-19 cases in their workforce, sales of what detractors call “fake meat” boomed. But the pandemic may in time affect sales of plant-based protein, too, as U.S. consumers become more wary of all things China—which supplies a majority of the products’ ingredients.

The market research firm Nielsen said nationwide sales of meat alternatives rose 224 percent in the week ending April 25, compared to the same period in 2019. During the last eight weeks, the gain over last year was more than 269 percent.

China’s food-processing factories provide most of what goes into vegan burger patties and other meat replacements made by market leaders Beyond Meat and Impossible foods—an arrangement that could damage their standing among consumers in the coronavirus age.

Beyond Meat recently signed a significant deal with Shuangta Foods, located in China’s Shandong province. Shuangta will provide 85 percent of the pea protein for its products. The company said its first purchases will total some 285 tons.

Ever since the emergence of the novel coronavirus in China’s Wuhan province, the world press has criticized the Middle Kingdom for its sanitary standards and its lack of institutional transparency.

“We have lots of opportunities to buy food—whether plants, real meat or other foods—that is grown and produced right here in North America,” Will Coggin, managing director of the Center for Consumer Freedom, a food industry-backed advocacy group, said. His organization runs CleanFoodFacts.com, an unsubtle dig at imitation meat brands.

“The coronavirus crisis has many Americans questioning the wisdom of being so reliant on China, both from a practical and ethical point of view,” he said. “Once American consumers learn that so much ultra-processed plant protein comes from China, fake meat won’t seem so appetizing.”

Fans of meat alternatives cite animal welfare, climate change, global food shortages and human health as reasons for their devotion. As a result, Beyond Meat and Impossible Foods have made their way into the mainstream, signing deals with Dunkin Donuts and Burger King.

But food safety scandals have long plagued China. Plant-based proteins sourced from China were used to produce pet food that killed nearly 4,000 cats and dogs across the United States in 2007. The food was contaminated with melamine, an ingredient found in plastics and glues.

The FDA and U.S. Department of Agriculture later concluded that between 2.5 million and 3 million Americans had eaten chicken and pork from animals that consumed tainted Chinese feed.

Chinese-made baby formula laced with melamine killed six children and hospitalized 53,000 there a year later. Manufacturers had added the nitrogen-rich chemical to milk in order to mask the results of tests measuring protein, according to the World Health Organization. The milk’s protein levels were low, the agency said, because it had been watered down.

Undeclared wheat gluten was the other culprit in the damaging Chinese pet-food episode. The U.S. Food and Drug Administration reported in January 2020 that pet food is “not subject to mandatory inspection” in China. The agency concluded that it “does not know which regions of the country may or may not be impacted by the problem, which firms are the major manufacturers and exporters of vegetable proteins to the United States, where these vegetable proteins are grown in China, and what controls are currently in place to prevent against contamination.”

While many American food companies source their pea protein from China, few disclose much to American or European regulators. Axiom Foods provided more than 100 pages of data to the FDA when it asked the agency to certify that its ingredients are “Generally Recognized As Safe,” a designation that would exempt it from many food safety regulations. The company mentioned Chinese production in just one paragraph.

Now Foods published a report about a trip to audit its providers in China, but details were similarly thin.

Representatives from Now Foods and Beyond Meat did not respond to requests for comment about how the safety and quality of food sourced from China can be guaranteed in light of that nation’s role in sparking the COVID-19 pandemic.

Lucas Thompson, a spokesman for Impossible Foods, said the company’s supply chain and production volumes haven’t been affected, and that it is “continuously evaluating our entire supply chain with the goal of ensuring product safety and minimizing delays or disruptions.”

The company is restricting external visitors to its facilities and those of its manufacturing partners, he said, and is sanitizing, disinfecting and deep cleaning all workplaces to ensure strict hygiene standards and worker safety.

“Impossible Foods meets or exceeds all guidelines set forth by applicable public health agencies and continuously consults with experts in the public and private sector,” he said.

The “Supplier Code of Conduct” handed out to Impossible Foods vendors lays the food safety burden on their shoulders, however, saying they must ensure ingredients “are accurately labeled and comply with all federal, state and local requirements. Suppliers are required to immediately report to us any issue that could negatively affect the quality or safety of any Impossible Foods product.”

The code is thin on enforcement mechanisms. It offers Hong Kong whistleblowers—but not those in mainland China—a toll-free hotline.

It’s unclear whether Chinese suppliers are better at maintaining food safety standards than they used to be.

Then came aluminum-laced dumplings and cadmium in rice. And Hunan province police in 2010 raided a network of underground businesses that made and sold “peas”—in reality small soybeans mixed with illegal dyes and sodium metabisulfite, a preservative also used as a disinfectant. People who attempted to cook them found they turned yellow, and the water turned green.

A 2018 study from the Clean Label Project, a nonprofit watchdog that licenses safety certifications to food producers, found significant levels of lead, arsenic, mercury, cadmium and other toxins in a majority of 130 protein powders sold at Amazon and organic food retailers.

Many of those products originated in China or were made with Chinese components.

These same raw materials are often used in protein supplements, including energy bars and milkshake powders widely consumed by Americans and Europeans.

China’s share of the global food processing market has climbed sharply since 2016. “As of 2017, there were seven pea producers in China with a total processing capacity of 67,453 tonnes per year, which will increase to 146,313 tonnes per year by the end of 2019, according to expansion plans,” the Good Food Institute wrote in 2019.

Dietary vegans who spoke with Zenger News said they try to rely mostly on unprocessed sources of protein instead of meat substitutes.

Montreal resident Camilo Gómez said he occasionally uses protein powder in a smoothie, but covers his protein needs with tofu, tempeh, beans, lentils, quinoa and nuts. “I see [them] as treats, when I crave a burger, I’ll have one,” he said of meat alternatives like Beyond’s burgers and faux chicken nuggets, “but I don’t rely on them as my protein source.”

Aleksandra Denda, a vegan who lives in New York City, said she’s “not a fan of any kind of protein powders” because of the lack of heavy metals testing. The contamination, she said, brings “larger damage than benefit.”

Chaya Bender, a vegan from Greenwich, Connecticut, told Zenger she consumes meat substitutes regularly. “I think fake meat is delicious and I do eat it about once a week,” she said. “I really think it’s for vegetarians and meat eaters, primarily. It’s like gateway veganism.”

More casual consumers of meat alternatives could be driven away as grassroots anger against China builds this year.

Impossible Foods founder and CEO Pat Brown predicted robust growth at the end of the year.

“Demand has soared from every category in which we do business.” Brown said then, citing “large fast-food chains, individual restaurants, colleges and universities, corporate campuses, theme parks and more.” No such projections have circulated since the COVID-19 panic shut down many restaurants across the country.