Frankfurt prepares to get back to business 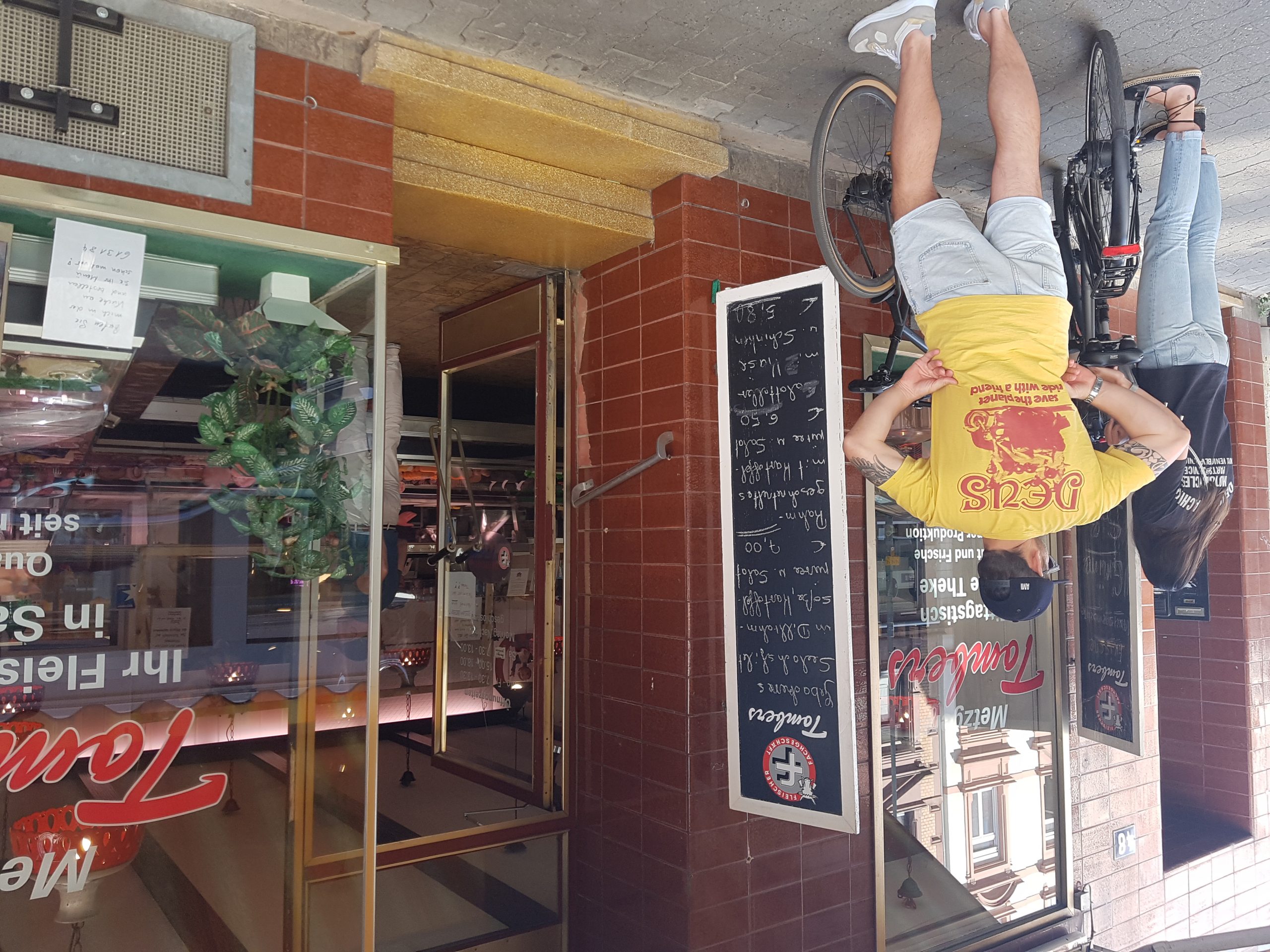 Two customers wait outside a Frankfurt butcher shop for service during the COVID-19 pandemic on April 24, 2020. (Marguerite Arnold/Zenger)

Despite the global pandemic, banking is still big business in Frankfurt. But smaller businesses in the German city are suffering as reopening looms.

Some local merchants admit they are struggling. “Business is reduced by 50%. We don’t expect an uptick for the next four months,” said Yildiray Sentürk, a shop assistant for Eifler, a popular bakery chain with an outlet located at Sudbahnhof, Frankfurt’s second-largest train station.

The state of Hesse, in which Frankfurt is located, has seen more COVID-19 infections and deaths than Berlin, according to statista.com. Overall patient numbers put Hesse in the top five of German states affected by the COVID-19 pandemic.

In Berlin, the nation’s capital, protesters clashed with police about reopening the city last month. But Frankfurt prides itself on a certain business-like resilience. A center of international finance, the city boasts highly educated commuters from foreign countries and the wealthy suburbs. Expats make up about 26% of the population. In addition, some of the best-paid residents of the international community of Frankfurt are well-suited for telework.

The city is also the home to the European Central Bank, a key player in economic response across the continent, which has not shut down.

Though global banks may dominate the skylines, they’re only one part of Frankfurt. German banks have consolidated their retail operations. Smaller neighborhood branches have remained closed, redirecting consumers to central locations if they need in-person assistance.

A better barometer for gauging the local economy might be Frankfurt Airport—one of the world’s busiest travel hubs.

Two of the airport’s four runways have also been temporarily shut down. “Currently, we bundle all passenger-handling operations in Terminal 1, Concourses B and C. Passenger handling in Terminal 2 is suspended until further notice,” said Kröll. But the airport is far from idle.

Vital supplies such as medicine and medical equipment are still arriving and being processed smoothly. Beyond supply-chain management, other projects are underway that could have happened efficiently only during a global shutdown. “We responded quickly with a range of measures to lower costs and to adjust staff deployment to this reduced demand,” Kröll said. “The partial renovation of South Runway commenced as scheduled on April 6.”

As Frankfurt’s banks and airport find new ways do business, Kurzarbeit—the German term for shortened working weeks in emergencies and supported by the government financially—has been put in place. Under this plan, Germans are working less but remain employed. As a result, the pandemic-induced unemployment rate across the country is lower than that of the U.S.

However, for residents who don’t work in the banking and airline industries, the pandemic and lockdown remain a daily challenge. Public transport, the great lifeblood of all German cities, is still eerily empty. Masks while shopping and traveling on trains and buses have been mandatory for everyone since April 27.

Changes could be ahead for the city, which has seen empty streets and closed shops for the last six weeks. Over the last week, “Mainhattan”— as it is known to locals—has cautiously started taking the first steps toward reopening.

In the streets of Sachsenhausen, the neighborhood also known as “Frankfurt’s Brooklyn,” just across the River Main from the central district where skyscrapers loom, foot and bike traffic has already begun to pick up. People have started gathering, politely, outside shops, waiting their turn to get in. Ice cream parlors seemed to be doing a particularly brisk business. Parents went to the park with their children.

But Ursula Wintershied, a 66-year-old taxi driver from Bonn who has lived and worked in Frankfurt for the past four decades, is still sitting at home as she has for the past month.

“Business is still down, about 90% from normal,” she said. While she expects to get a call to go back to work sometime in May, Wintershied doesn’t see a rapid return to the way things were. “Things will be slow, for quite some time,” she said.