The event’s organizer said he started a movement to reopen the Granite State because “my church is not allowed to meet.” 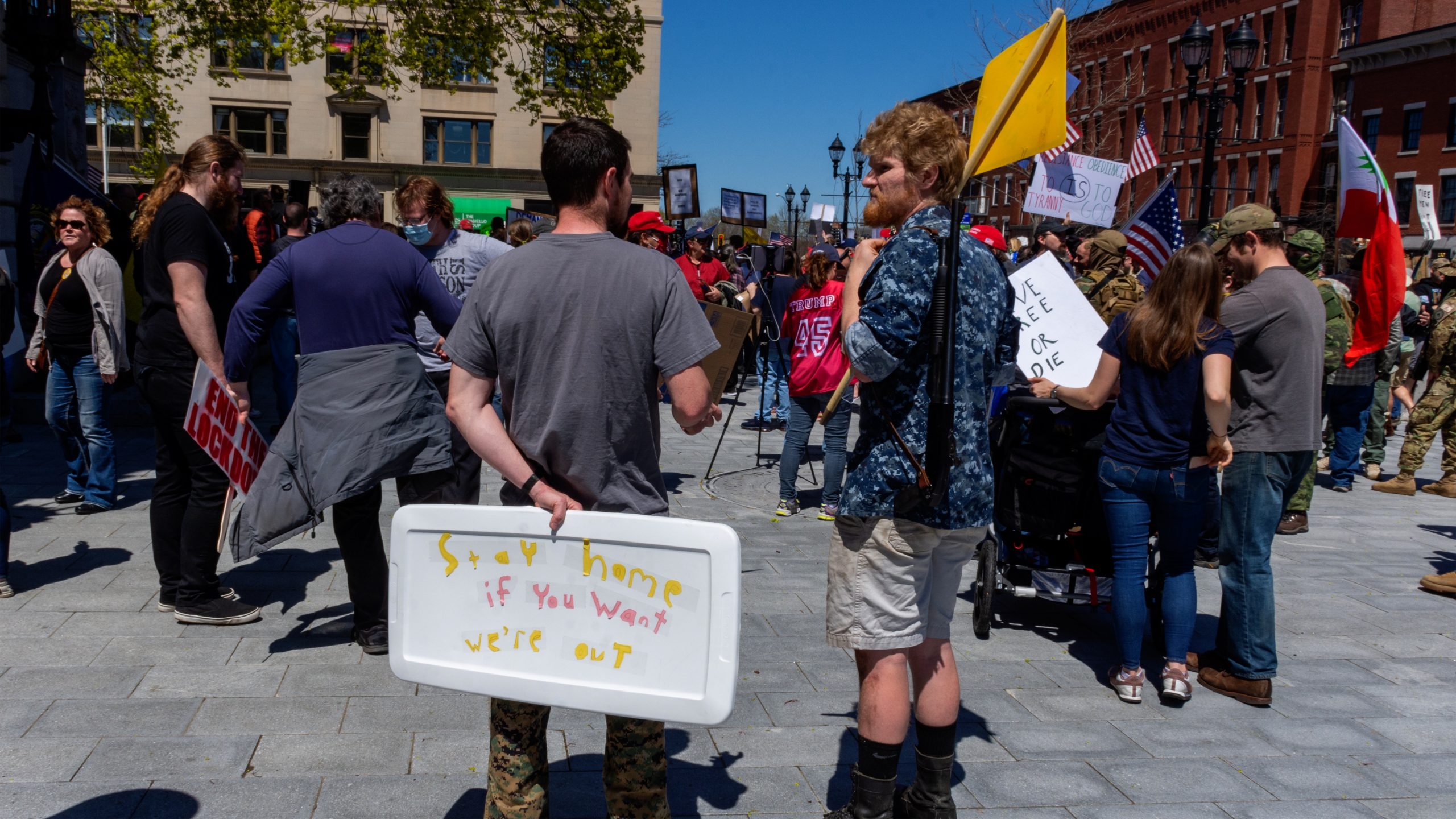 Hundreds of activists protested state-wide restrictions due to COVID-19 in Concord, New Hampshire on May 2, 2020. (Jon Farina/Zenger)
A farmer, a former talk radio host and a pastor who preaches in Revolutionary War garb riled up protesters Saturday in Concord, New Hampshire, claiming Gov. Chris Sununu has imposed needless “house arrests” on taxpayers in order to control the spread of COVID-19.

Hundreds gathered at the State House, defying Sununu’s order to limit gatherings to fewer than 50 people, demanding a wholesale reopening of businesses and the end of quarantines.

“I understand the compelling interest the state has to protect health and safety and doing it by the least restrictive means,” conservative pastor Garrett Lear told the crowd.

“I do not see extensive quarantines, house arrests, business closures, destroying our once vibrant economy, as the least restrictive means.”

“Frankly, I smell a rat,” Lear said to cheers.

Lear, a stock character at right-wing rallies in New England, is best known for his tricorn hat—and for nicknaming himself “The Patriot Pastor.”

Newspaper editor and former Republican state lawmaker Andrew Manuse responded to chants of “Live free or die!”—the Granite State’s official motto—by claiming “the Bible said something like that too.”

Manuse, who founded the “ReopenNH” movement, said he became radicalized “because my church is not allowed to meet.”

Sununu declared a coronavirus-fueled state of emergency in mid-March, renewing his executive order twice since then.

ReopenNH delivered 5,500 signatures to the State House after Saturday’s rally, demanding he roll it back.

The movement’s figureheads include Keith Hanson, a former Republican Party county chairman and talk radio host who calls himself an “unapologetic conservative.”

He was ousted from both positions in October after he tweeted that a constituent was a “d**khead troll basement-dweller” and told another to “Go f**k yourself.”

Hanson, now a podcaster, also called a U.S. Navy veteran a “traitor” for criticizing his decision to invite anti-Muslim author Robert Spencer to a fundraising event.

He told Saturday’s rally crowd that Sununu, a fellow Republican, had threatened “freedom of speech. freedom of assembly, the ability for a redress of grievances [and] the right to keep and bear arms.”

“This is what makes us different from every other hell hole on this planet,” he said.

New Hampshire is among the U.S. states least affected by COVID-19, with 2,518 confirmed cases and 86 fatalities. The overall American death toll now exceeds 67,000 with more than 1.1 million infected.

Sununu banned “gatherings of 50 people or more” in early April for a long list of purposes including sporting events, church services, parades, concerts, festivals and fundraisers.

His order will expire May 31 unless he renews it.

“Most of these rules are arbitrary. They’re not based on science” protester Todd Pollack said Saturday. “This is why we are out here.”

Sununu appears to support reopening New Hampshire’s economy, but at a slower pace than activists are demanding. He released new guidelines on Friday covering a plan to open retail stores, drive-in movie theaters, golf courses and hair salons in the next two weeks. Restaurants could reopen by May 18 if they can meet social distancing and sanitation standards.

“We all know you are healthier at home, and that continues to be true, but we are also taking steps to reopen our economy in a smart, step-by-step approach that is supported by facts, science and data,” he said Friday in measured language.

Saturday’s rally was anything but calm.

Rodney Phillips, a farmer and former firefighter, said it felt “like we’re back in 1775, before we had a revolution.”