Gov. Andrew Cuomo has banned all “non-essential gatherings” of people statewide. As police enforced that order on Friday and evicted both activists and journalists, one protester yelled, “Death to tyrants!” 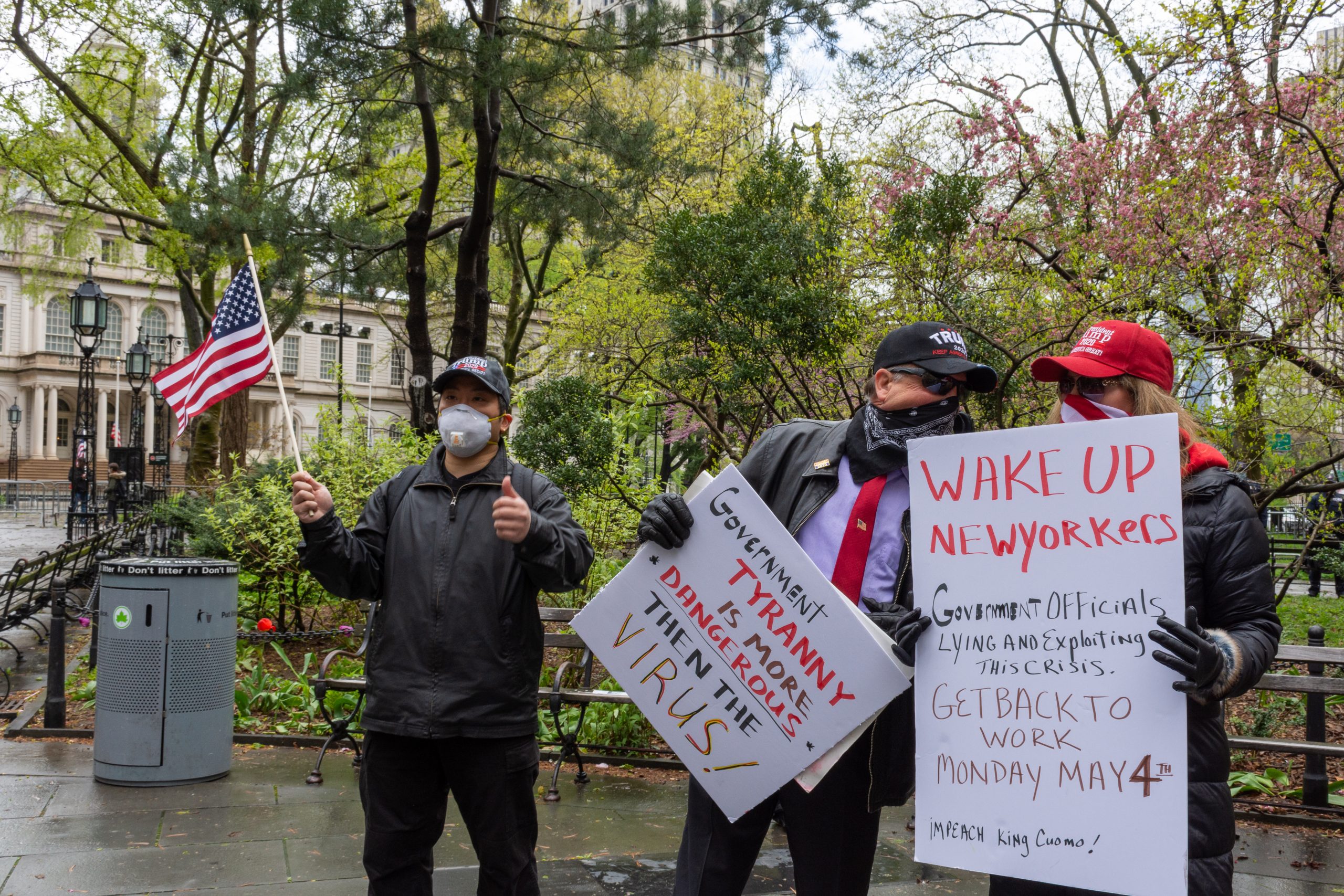 Police officers cleared out City Hall Park on Friday in New York City, threatening to arrest protesters and journalists during a brief demonstration against an order that shuttered businesses and banned gathering in groups statewide.

“Everybody’s ordered to leave the park. Gatherings are prohibited by the governor’s order,” an officer said through a loudspeaker. “If you refuse to leave the park, you will be subject to arrest. That’s everybody. That includes the press.”

Democratic Gov. Andrew Cuomo outlawed “all non-essential gatherings of individuals of any size for any reason” on March 22, according to his office.

As police issued their warnings, one protester shouted: “Cuomo is a tyrant! Death to tyrants.”

Cuomo announced Friday that the number of confirmed COVID-19 cases in New York state has climbed to 308,314. The disease has killed more than 24,000 there.

Brooklyn-based realtor Aida Nesimi told Zenger News that her business has ground to a halt because of the resulting quarantine.

“I can’t show a vacant apartment to one person. Absolutely ridiculous,” she said. “I’m here to stand up for my rights while governors all over the states are trying to take them away.”

Tom Zmich, a Republican candidate for Congress in New York’s 6th district, said, “We need to get back to work on Monday morning. Eight o’clock, everybody in New York here. Go back to work.”

“That’s it. We’ve had enough. Enough is enough with these people,” Zmich told Zenger.

The First Amendment to the U.S. Constitution protects freedom of speech, freedom of the press and “the right of the people peaceably to assemble, and to petition the Government for a redress of grievances.”

The small group of protesters argued Friday that their rights should outweigh the lawfulness of actions a state government takes on public health grounds.

An opposing group with Refuse Fascism, a project of the Revolutionary Communist Party, USA, responded with, “They say America first! We say humanity first!”

President Donald Trump has taken a hands-off approach to quarantines, allowing governors to set their own policies and enforcement guidelines, and giving them broad latitude to reopen businesses and other institutions.

A large group, some armed with rifles, stormed into the State Capitol in Lansing on Thursday, shouting “Lock her up!” and “Let us in!” as they sought entry to a session of the state legislature.

Lawmakers in the Republican-controlled Michigan House of Representatives voted not to extend Whitmer’s emergency declarations, which mirrored Cuomo’s.

Friday in New York, Brooklyn resident Sebastien Porsenna told Zenger that Cuomo’s government is “over-exaggerating” the impact of the coronavirus pandemic and “hyping this thing up.”

Citing many New Yorkers’ loss of income, Porsenna said restricting people’s movements is “not what the founding fathers envisioned for our nation.”

“This is unconstitutional, and Benjamin Franklin is rolling over in his grave right now,” he said.