‘Nobody ever asks poor people about their capacity’: Bob Woodson offers a hand up through his center

Woodson isn't shy about criticizing those he sees as out of touch with the low-income communities they claim to speak for.
By Dan Holly April 27, 2020
Facebook
Twitter
Linkedin
Email 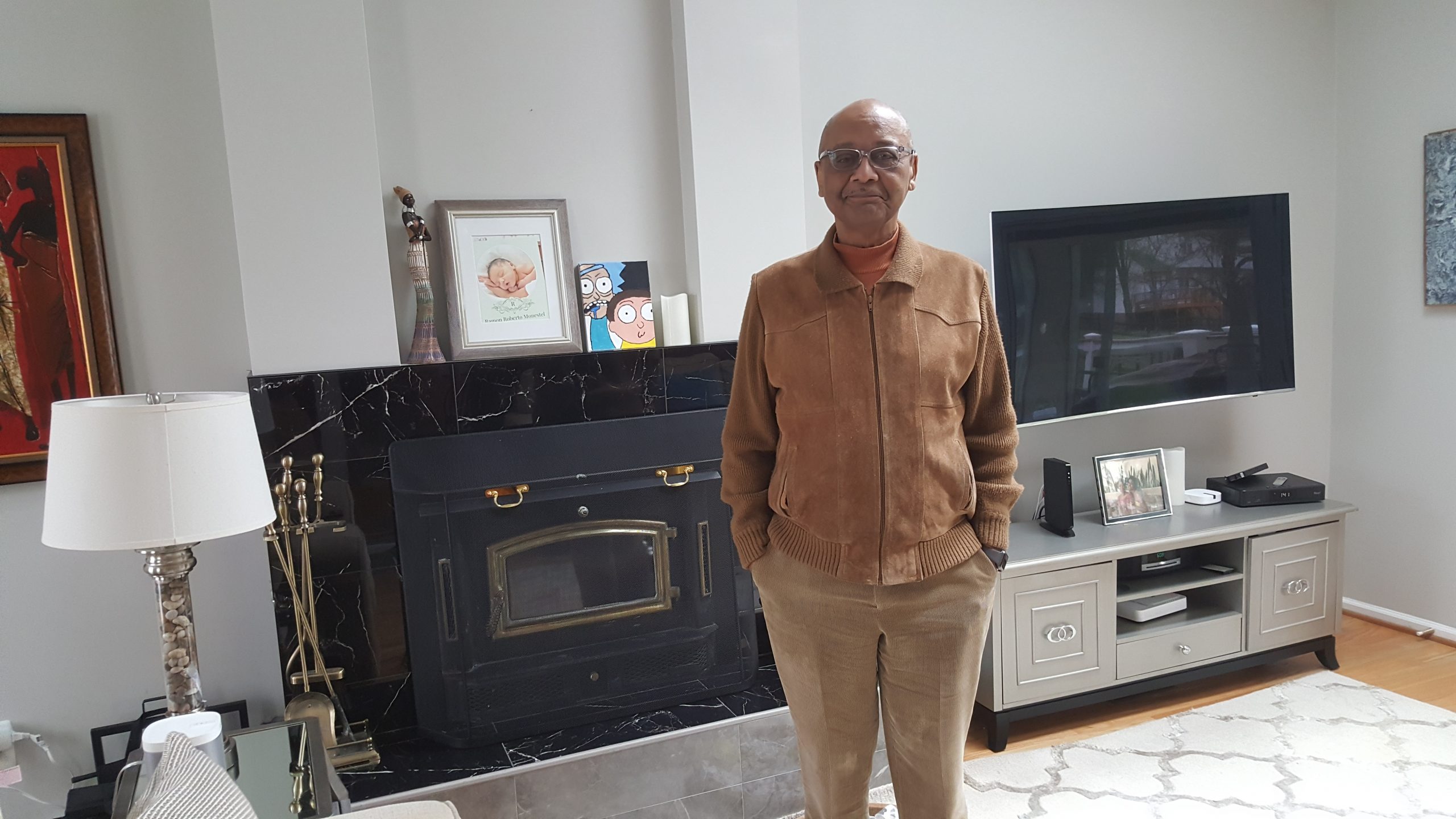 Bob Woodson, the 83-year-old founder and president of the Woodson Center, a Washington, D.C.-based group that focuses on transforming black communities through self-help, poses for a photo in his suburban Washington, D.C. home on March 18, 2020. (Dan Holly/Zenger News)

WASHINGTON, D.C.—Bob Woodson swims against the current. His salvos against those he sees as headed in the wrong direction—including the NAACP and the Urban League—are the latest in a long divide over how best to uplift the race.

In the tradition of Booker T. Washington’s emphasis on “up from the bootstraps” self-reliance rather than W.E. B. DuBois’ advocacy in public protests, the 83-year-old founder and president of the Woodson Center, a Washington, D.C.-based group that focuses on transforming black communities through self-help, carries the torch for those who advocate a less confrontational approach.

“All of my work throughout my life has been working on behalf of low-income black neighborhoods, helping them to create strategies to promote excellence within their communities so they’re agents of their own uplift,” Woodson said.

Woodson, who lives in suburban Washington, D.C., accuses civil rights leaders of not being familiar with the low-income communities they say they speak for. Unlike most black leaders, he’s a Trump supporter. At a White House ceremony last year marking Black History Month, Woodson praised the president, who called him a “special friend.”

His latest fight is with the New York Times’ 1619 project—the newspaper’s ambitious effort to rewrite American history from the point of view of slaves, not just slave masters. The project takes its name from the year slaves were first brought to the U.S.

While lauded by many African Americans and political progressives, the project has been heavily criticized by conservatives as wrong-headed and inaccurate. Woodson pulled together conservative blacks, forming the 1776 Project as “an assembly of independent voices who uphold our country’s authentic founding virtues and values and challenge those who assert America is forever defined by its past failures, such as slavery.”

Woodson and reporter Nikole Hannah-Jones, who created the project, have a few things in common: Both are passionate, and both are smart – both received MacArthur fellowships, the so-called “genius grants” that recognize “exceptional creativity” and come with awards of $625,000.

Jones defended the 1619 Project, which includes a series of articles and a curriculum for history teachers, as “examining slavery’s modern legacy and reframing the way we understand this history and the contributions of black Americans to the nation.”

But Woodson thinks the project hurts, not helps, black Americans.

“What she is offering is lethal,” Woodson said. “If you have a 10-year-old who is starting school and they’re going to read the 1619 Project, what messages are we going to send to that 10-year-old? That you live in a country that was founded on slavery and it’s racist and all white people are villains and you are a victim and, until they change, you can’t expect to prosper? And I’m saying to them, ‘Your forbearers were enslaved yet some of them died millionaires. You need to know that we built hotels, insurance companies, banks railroads… I’m offering an alternative narrative.’”

Jones said the project does not promote black victimhood. “My essay, the lead and foundational anchor for the entire project, is about how black Americans, despite everything that’s been done, are the perfecters of this democracy and have fought with remarkable success to make the ideals of our founding true,” she said. “My essay ends by marking the incredible progress black Americans have made despite being one generation out of legal apartheid and telling black Americans that we have made unparalleled contributions to this land.”

Woodson’s life story and experience, though, make it hard to dismiss him. Born in 1937 in a working-class neighborhood in Philadelphia, he has devoted his career to improving the lot of his people.

The community where he grew up was low-income but stable, he said, a close-knit community where neighbors helped discipline neighborhood kids. “I grew up believing, by my experience, that healthy living was possible. It was all around me.”

The death of his father when he was 9 robbed his household of some stability, and he ended up dropping out of high school and joining the U.S. Air Force. After earning his G.E.D. while in the military, he enrolled as a math major at Cheyney University in Pennsylvania. His ambition was to be part of the space program.

But a job at a juvenile jail in Philadelphia while in college changed his life. He had gotten close to some of the incarcerated youth, and would risk his job by bringing them treats. In 1961, when he was 25, he had an incident that would change his future.

“One day I was getting two of the kids to clean up and when I came into the unit all 60 of them stood up and applauded. …I turned immediately and walked out onto the grounds because I was crying. I was so moved. …That changed my whole life. I said, ‘I’ve got to devote my life to helping these kids.’”
Woodson earned a master’s degree in social work from the University of Pennsylvania. Initially, he was part of the civil rights mainstream. He worked for both the NAACP and the National Urban League, but soon grew disenchanted with what he called “dependency-producing programs.”

In 1981, he started the Woodson Center. Drawing from his youth, Woodson set the center’s mission as to “transform lives, schools, and troubled neighborhoods, from the inside out.”

“Nobody ever asks poor people about their capacity … all we do is failure studies, both left and right,” he said. “I wanted to ask different questions.”

In 1991, after a comprehensive survey of community leaders to determine the programs most effective in transforming neighborhoods, the center’s mission evolved to include faith.

“If you are a drug addict or if you have the wrong values and the wrong attitude, giving you a job and a place to live is not going to do it,” he said. “Our people confront that. We say, ‘I’m going to help you but you’ve got to change the way you’re living your life and the choices you’re making.’”

Among those the center has helped is Curtis Watkins, who is now its director of affiliate mobilization. He works to bring people who used to be like himself under the center’s wings.

He grew up in a public housing development in Washington, D.C.

“I helped destroy that community,” Watkins said. “I used to be a drug dealer…I used to transport drugs from Maryland to D.C. and sell it to people who sold it to other people. So I was a supplier … In 1996, I had my Christian experience and I was reborn and I started doing this community work…When I got to the Woodson Center it went to a whole ‘nother level.”

Watkins’ work has ranged from simple drives to collect toiletries for the elementary school he attended to a Stock Investment Club for the community.
Woodson’s bottom-up approach appealed to him, Watkins said.

“These people had talents and skills that I would never think of,” he said. “It’s really important to listen and not have all the answers.”

But Woodson’s focus is not unique. The Urban League promotes economic empowerment through programs that include education and job training, workforce development and entrepreneurship. Last year, the NAACP announced it would establish of empowerment programs.

And, although he says he wants to keep a laser-like focus on how to help low-income people, he often veers from that, as with his criticism of the 1619 project.

“Mr. Woodson’s attacks against the project, and me in particular, have been very personal, and I have no idea why,” Hannah-Jones said. “I have never met him. I have never written about him. Yet he accused me of not living in the neighborhoods of the poor black people I write about, of basically profiting from their pain, while anyone who does even a cursory Google search knows that I have chosen to live in a low-income black neighborhood and send my daughter to a segregated, high-poverty school.”

But Woodson said he is only trying to stir debate: “I don’t care whether someone likes me.”