"If you're locked up in a prison right now, it's a death sentence," one protest leader said, adding that he wants to "abolish" U.S. Immigration and Customs Enforcement and release all its detainees.
By Ford Fischer April 24, 2020
Facebook
Twitter
Linkedin
Email 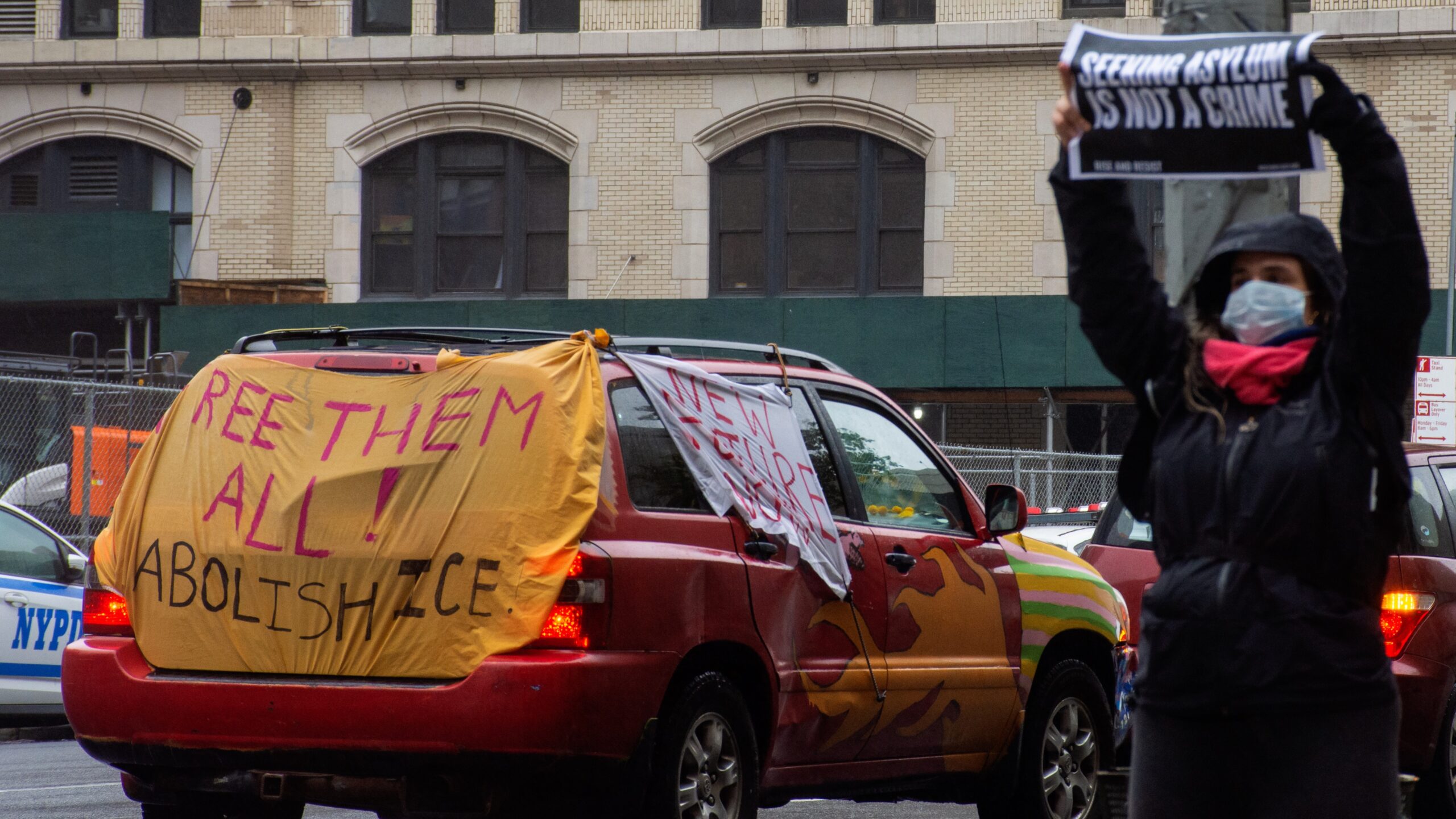 Protesters in cars, on bikes, and on foot made their way through midtown Manhattan demanding the release of people held in ICE detention centers on April 24, 2020. (Jon Farina/Zenger)

Dozens of activists stood in social-distancing-appropriate formations on Friday in New York City as they demanded U.S. Immigration and Customs Enforcement release detainees who have accused of entering the country illegally.

“People are dying in these cages right now,” Benjamin Shepard said from behind a surgical mask in Times Square.

Benjamin and the others marched, biked, and drove around the city, describing the COVID-19 pandemic as reason to let federal detainees out of lockup.

The protesters stood six feet or more apart across Times Square, some remaining in their cars, honking and displaying banners.

“This is a country of immigrants,” Shepard, a Brooklyn resident, told Zenger News. “If you’re locked up in a prison right now, it’s a death sentence.”

Then, indicating a broader goal, he told Zenger News: “Abolish ICE. Free them all.”

Although the federal agency hasn’t confirmed any deaths in its facilities from COVID-19, ICE confirmed on its website that 105 detainees have tested positive for the novel coronavirus that causes the disease.

Twenty-five detention staff and 81 other employees also have the virus.

Savitri Durkee, an activist who goes by the name “Savitri D” in public, said the protest was conducted by “a coalition of groups who are opposing the detention camps that ICE runs and also incarceration generally in New York state.”

She also demanded New York Gov. andrew Cuomo release prisoners from state-run prisons “because COVID is rampant in all the detention facilities.”

The state of New York has reported 269 confirmed COVID-19 cases in its incarcerated population. Seven of the victims have died.

The group of protesters included Critical Mass, a group that advocates for safety and accessibility for bikers on New York streets, typically by blocking automobile traffic on one Friday each month.

Members often hold bicycles over their heads as they observe moments of silence for cyclists who have died on the roads. On Friday they made the same gesture to honor illegal immigrants who have died from COVID-19.

They concluded their protest outside an ICE office on the south side of Manhattan, chanting that federal immigration agents “are not essential workers.”

«Previous Post
Big Tech offers a way to track COVID-19 with cell phones»Next Post
‘Nobody ever asks poor people about their capacity’: Bob Woodson offers a hand up through his center