In the ruins of a burned village, a discarded cell phone reveals social network of terrorists and U.S.-trained forces. 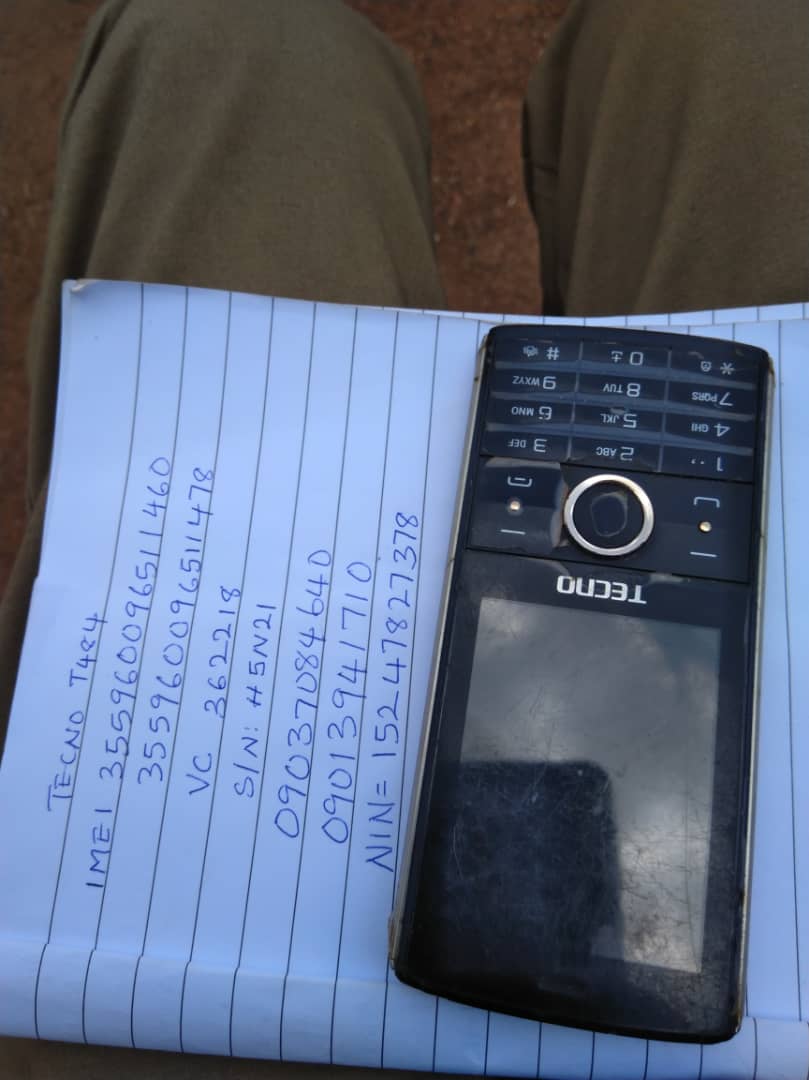 A cell phone with 26 phone numbers, including contacts in the army and police, was found after a village massacre April 26, 2020 in Nigeria’s Kaduna state, just north of the nation’s capital Abuja. (Lawrence Zongo/Zenger)

Amid butchered bodies and scattered wreckage, surviving villagers found one of the attackers’ mobile phones. The phone was not password-protected. Among the 26 phone numbers saved to the phone were direct mobile phone numbers for Nigeria’s army and police officers—the very people who should be hunting terrorists.

Survivors found the phone after a village massacre on Sunday in Nigeria’s Kaduna State, just north of the nation’s capital Abuja.

The Muslim radicals are part of the Fulani tribe, villagers said. The tribe has more than 12.8 million members in Nigeria, according to the CIA World Factbook. The tribe also has members in more than a half-dozen countries, and some members have intermarried with Al Qaeda and Isis leaders. The contacts could be because they are members of the same tribe, and not because authorities are colluding with terrorists.

Cell phones have been found in the wake of previous attacks. A cell phone was recovered at an Irigwe village massacre in Plateau State in 2018 and was turned over to police. No arrests or prosecution followed, according to barrister Yakubu Bawa. This phone, made by a Chinese company, is commonly available in Nigeria.

The phone was left behind after more than 100 jihadis terrorized a predominantly Christian village in Ungwan Magaji, located in the central belt of Nigeria, known as the badlands.

“My house was one of the first to be reached by the Fulani terrorists Sunday around 6 p.m. when about 160 of them charged from all sides of the village firing their rifles,” said Ezekiel Isa, a 27-year old farmer, who leads a group of young men loosely called vigilantes. In Nigerian English, the term “vigilante” does not carry a pejorative connotation.

“They came to my community mainly to kill us and burn our houses,” Isa said.

“The attackers were all Muslims. They were shouting ‘Allahu Akbar,’” Isa said.  “They were speaking Fulani language, which we don’t know, but we could understand their words in our Hausa language, and they were saying ‘kill 150, kill 150, they are infidels, kill them!’ This is not the first time we faced attacks by the Fulani terrorists. They had killed many of our village last year.”

The Fulani, who practice Islam, are one of Nigeria’s major ethnic groups. While many are nomads, a number of prominent Nigerians—including President Muhammadu Buhari—are Fulani.

Isa said he rushed through the village telling women and children to run into the bush as fast as they could. He then retrieved his hidden shotgun and rallied the vigilante youth to return fire.

The Fulani attackers used rifles and machetes while the handful of vigilantes fired mostly primitive shotguns. “Our youth hid behind houses and stayed close to the ground to avoid being hit,” Isa said.

Although calls were made to the Nigerian army, no soldiers arrived to help, according to the villagers.

“The district police officer of Kamaru came on Monday around 5 p.m. together with the Honorable Shuaibu Goma, chairman of the local government, to consult with us over the killings,” Isa said. “The chairman said to us that he will bring relief materials for us but due to the challenges of COVID-19 pandemic, it may take some time before he will come back again.”

Terrorists have launched attacks against several villages in the rural area in far western Plateau State since 2002, according to Kyle Abts, director of the International Committee on Nigeria, which tracks terrorist incidents.

The U.S. State Department’s characterization of the massacres as ethnic group rivalry and conflict between crop growers and animal herders, is incorrect, Abts said. “It is not a fight between ethnic groups, nor a pastoralist versus herder conflict. It is a coordinated and premeditated onslaught that has implications for government ineptitude, cover-up or involvement,” said Abts.

The Fulani terrorists went from house to house, setting each on fire, until they had torched more than 50 houses in the hamlet holding approximately 600 residents. Vigilantes and terrorists exchanged shots for approximately 2 hours.

“Last year my father was killed, now they killed my mother” said Talatu Joseph, 35 as she broke into tears in front of her torched house. “My mother was telling me to go and hide, so I didn’t see their faces, I just ran save my life, and as I did my mother was killed.”

“The Fulani terrorists killed four people from my community,” Isa said. “Three were killed as a result of gun shots while one elderly man died of shock. Three older women were killed running to escape. They were the first to fall, but my vigilante group with vigilantes from neighboring communities killed one of the Fulani and injured some with shot.”

Jerry Adi, a 15-year-old vigilante, said he is the youngest on the defense team. “I am the youngest vigilante in my village, I am not afraid of Fulani herdsmen, I am ready to fight them, I have never killed any Fulani terrorists, but I will defend my community when there is no police support from the government.”

None of these attacks, taking hundreds of lives, were followed by prosecutions by Nigerian authorities, Bawa said.

Word of the killings in Kaduna State drew comment from Nigerian clergy of churches with majority expatriate members. “It is hard not to believe that the Nigerian government isn’t colluding with these attacks,” said the Rev. Sunday Bwanhot, a pastor of the Evangelical Church, Winning All. “We are pleading that the U.S. government will step into this situation to bring this colossal human abuse situation to control.”

Human rights observers called the attack evidence of an ongoing genocide. “The size of this attack by an organized, heavily armed Fulani militia numbering over 100 attackers is proof that these attacks are not “isolated incidents,” said Dr. Gregory H. Stanton, founding president of Genocide Watch, a human rights watchdog. “The attacks are not simply due to “traditional” herder-farmer ‘conflict.’  They are one-sided genocidal massacres.”

Tina Ramirez, president of Hardwired, a human rights organization with offices in Jos, agreed. “The recent attack on Christians in Bassa, Plateau State and the newly reported massacre in Ungwan Magaji in Kaduna State expose the grave failure of Nigeria’s government to protect its citizens—and the urgent need for officials to ease gun laws and allow communities to protect themselves and their families,” she said. “The glaring trend of violent attacks on Christian communities in the north cannot be ignored, and the government must be held accountable for failing to protect its citizens and leaving them defenseless against attacks.”