Georgia’s Orthodox Christians will go to church on Easter and drink wine from a communal spoon, tempting coronavirus

Orthodox Christians in the former Soviet nation will continue to gather for worship. The government and clergy have agreed to keep churches open for the holiday, which critics say will spread disease. Some bishops argue that church attendance can heal. 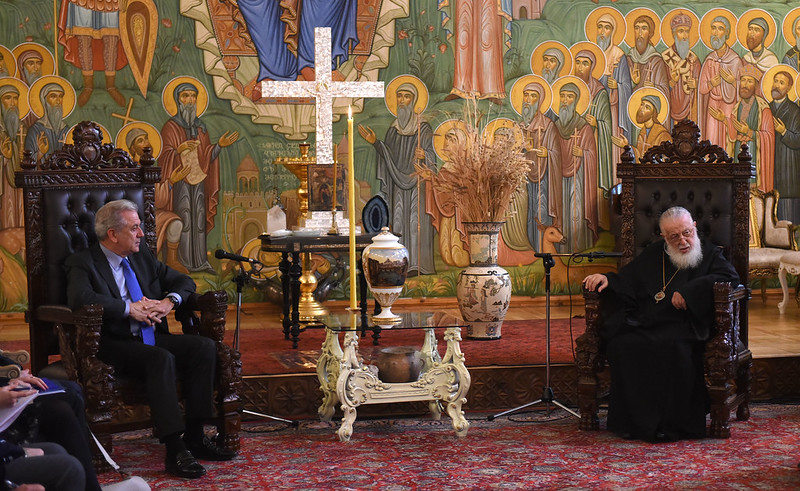 Orthodox Christians in the former Soviet bloc nation of Georgia are torn between following civil and church leaders ahead of Easter, one of the most important holidays for the church.

And a shared spoon has become the symbol of the conflict.

Critics have denounced the single communion spoon that serves wine to all churchgoers during a service, as a way to spread coronavirus. But most church officials have urged members to come to services, and say they will not change how they celebrate the sacrament.

More than 380 cases of coronavirus have been reported in Georgia. Eighty-four people have already recovered. While several clergymen tested positive for COVID-19, the patriarchate expects thousands of parishioners to attend Easter Sunday service. The heads of individual dioceses are making their own decisions, and some bishops have told the faithful not to attend church on Easter night—and pray at home.

The country of 3.7 million in the Caucasus Region confirmed its first COVID-19 case on Feb 26. The Georgian government first blocked people entering from countries that reported cases of the disease, and then declared a state of emergency in March. The move restricted citizens’ constitutional rights; banned international air, land and sea traffic; closed schools and recreation areas; instituted a countrywide curfew from 9 p.m. to 6 a.m. and banned groups of more than three people from gathering or sitting in a car together. Sitting in a car’s front seat, next to the driver, is also forbidden.

The church was exempt from most of these restrictions.

Most business activities were forcibly stopped, online shopping was banned, agrarian markets were closed and many financially vulnerable people lost their only sources of income.

There are stiff penalties for ignoring the orders. Giorgi Mshvenieradze, the chairman of the Georgian Democracy Initiative, pointed to heavy fines Georgians face for violating the curfew: 3,000 Georgian lari, nearly $5,000, for individuals. For companies and other institutions, the fine is 15,000 lari, about $4,770.

“This is clearly an unfair double standard and an example of selective justice. In reality, this position of the Church serves only the demonstration of its power and influence and this demonstration is actually a provocation, directed towards the government,” Mshvenieradze told Zenger News. “To be more precise, the church seeks to prove that it stands beyond the law and governmental control. Instead of engaging in charity and helping people who need support due to the crisis, the church is trying to assert its power and influence by using the veil of religion.”

The government last week extended the state of emergency until May 10, banned all types of transportation from entering and leaving four major cities in Georgia, and had banned private vehicle traffic from April 17 to April 21 because of the Easter holiday.

But government authorities and the patriarchate, the leaders of the Georgian Orthodox Church, agreed the following day not to close the churches, and to allow clergy, church servers and chanters to use their private cars.

Clergy are disinfecting some churches ahead of the holiday.

Catholicos-Patriarch of All Georgia Ilia II, the head of the church, said in a March sermon that the virus will strengthen people’s faith. High-ranking clergy have since echoed the sentiments of the patriarch.

Metropolitan Job, the bishop of Urbnisi and Ruisi, urged residents to go to church and said there would be no danger. “The call of the patriarch should be the most important, not unbeliever government and doctors,” he said in a sermon Wednesday.

Despite restrictions and requests for people to stay home, there was a record crowd for Palm Sunday last week in Tbilisi, the capital. Prime Minister Search Giorgi Gakharia told reporters in a briefing afterward that some parishes were fined.

When asked if Holy Communion from a shared spoon risks spreading the virus, Minister of Health Ekaterine Tikaradze said “There are no scientific studies about this issue, I can’t answer with the affirmation.”

The prime minister said the fundamental nature of religion means churches will remain open, and described the country as an Orthodox Christian state. Georgia’s constitution does not establish a state religion. Mshvenieradze told Zenger that it’s constitutionally possible to close houses of worship, as other countries have done.

“The government has so far defied this obligation with its inadequate response to the Georgian Orthodox Church. This defective approach has two negative effects at the same time: it increases the risk of the coronavirus spread and seriously damages the rule of law and democracy in Georgia,” he said. “The deference to the Church demonstrates that the government is heavily under its influence. Unfortunately, this influence is not a new issue, as the dominant religious community has been involved in public and governmental decision making for a long time now. This raises concerns that the Church will remain unpunished, uncontrolled and free to act arbitrarily in violation of the law.”

Theologian Basil Kobakhidze, who left the Georgian Orthodox Church priesthood in protest, castigated the church and the government for now shutting everything down.

“The patriarchate does not close the churches for parishioners. Only the patriarch can do that. If the patriarch does not announce today that all the temples for the parishioners will be closed for at least a month in Tbilisi and the regions, consider that we are doomed,” he wrote Saturday in a Facebook post. “Because the government does not protect us, it is simply complicit in the genocide of the nation by the church.”

Doctors and epidemiologists have also called for people to stay home.

“We won’t be able to count coffins in Georgia, do we want that? Avoid even contact with each other. This is how this perfidious disease spreads. If we don’t stay home, we can’t survive,” said Paata Imnadze, deputy director of the Georgian National Center for Disease Control and Public Health “We will have the greatest sacrifice. That’s all we need to understand. Don’t go to church, let’s save the church.”

But clergy have called for people to come and be healed. Parishioners were already approaching local churches Saturday.

“The Church is the body of Christ, and every action performed in the Church signifies the processes performed in the entrails of the divine organism,” the bishop of Chiatura and Sachkere, Metropolitan Daniel, told believers in a sermon ahead of Palm Sunday. “Therefore, if a person is at least slightly ill and does not know about it, if he comes to church, he will be healed.”