A man who criticized Nigerian police and military for withdrawing from a region where Muslim militants have killed at least 20 Christians says he was drenched in ice water and forced to roll around on concrete for hours. 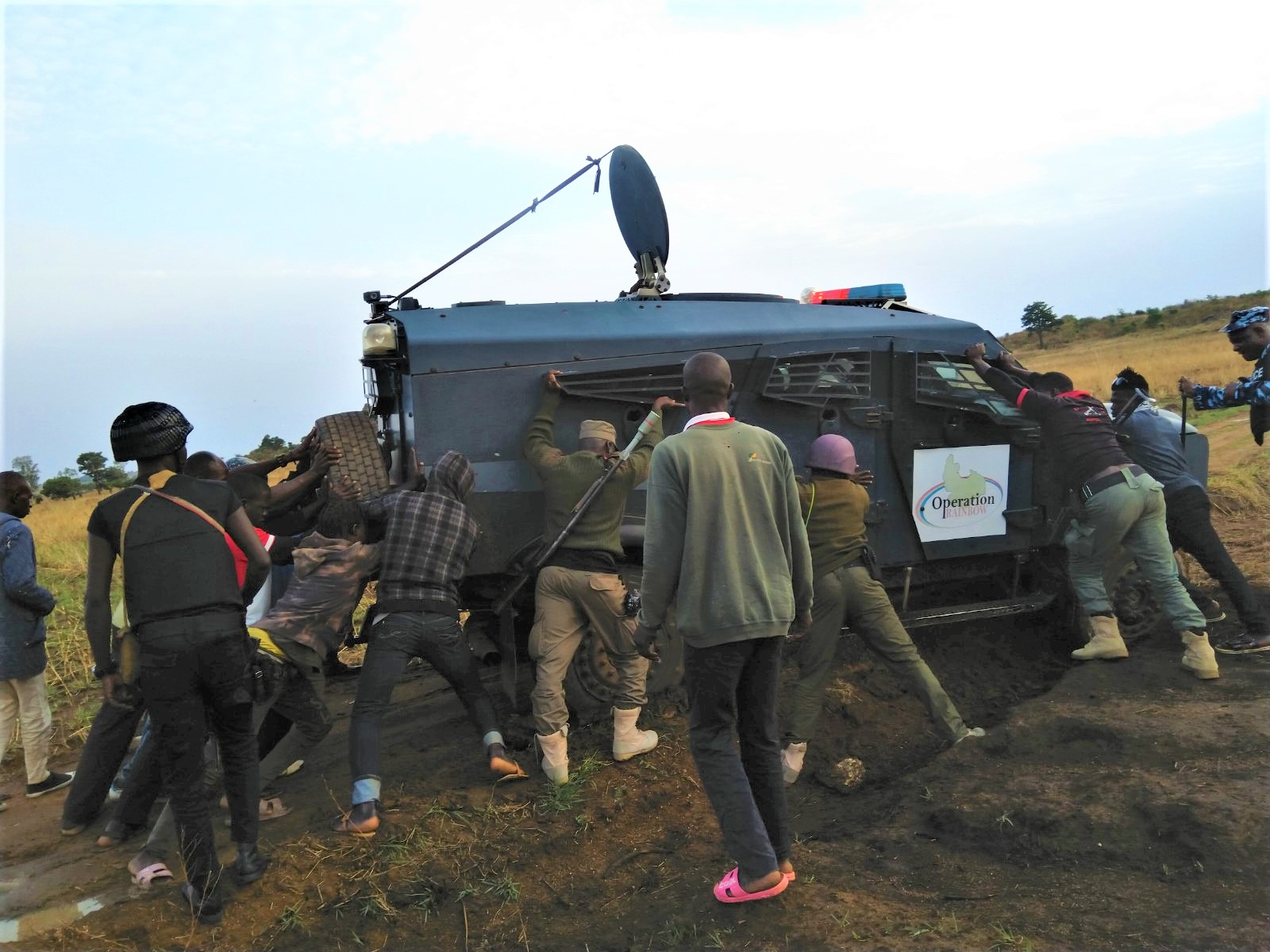 Ngbra-zongo villagers lend police a hand after a Plateau Police vehicle sunk into the mud on April 8, 2020. (Lawrence Zongo/Zenger)

Nigerian authorities questioned a man who had earlier talked with Zenger News about one in a series of killings of Christians in Plateau State.

“’You’re going to respect the uniform from now on, aren’t you, little boy!’ Captain Wilson said, as he hosed me down from head to toe in ice cold water,” said Moses Gata, a graduate student in Jos, Nigeria. Gata said he was ordered to roll back and forth on the concrete porch of a temporary army barrack for close to two hours until he was rescued by an elected official who had heard from family about his predicament.

Gata came home to Miango in Plateau State, an embroiled terrorist badland of Nigeria, later that evening. It was Good Friday, April 10. He was shivering and feverish.

He said his apparent crime, three days earlier, was talking back to an Army captain at the scene of a Muslim-on-Christian massacre.

“According to soldiers, my offense is that I have incited the people against them and against the government,” Gata, a former high school teacher, said Saturday.

Gata had confronted the captain he says questioned him, and a top police official who came to investigate the grisly murders of four in a nighttime raid on the village of Ngbra-zongo.

Ngbra-zongo sits in Kwall District, a remote rural area one hour’s drive west of Jos, the capital of Plateau State.

Most Nigerian media did not cover the mourning ceremony Gata attended there on April 8. Some have reported that as many as 20 unarmed civilians in Plateau have been murdered since March 23 by bands of terrorists believed to be of the Fulani ethnicity.

The coronavirus pandemic creeping slowly from Nigeria’s teeming city Lagos to a few cities in the south has dominated newspapers and broadcasts, drowning out news of the slaughters

COVID-19 has not yet appeared to penetrate 19 of Nigeria’s 36 states. Now in its second week of lockdown, Plateau State has no documented cases of the disease.

Nigerian President Muhummadu Buhari announced Monday that a nationwide government-ordered lockdown would continue for another two weeks, despite widespread reports of starvation.

Military units have withdrawn from the rural area of Plateau State, a development that locals say has allowed terrorists to continue their deadly raids unchallenged.

“I blamed the security for withdrawal of soldiers at the checkpoints and hence the attacks when it was barely a week after the withdrawal,” Gata told Zenger, explaining why he may have been targeted for retaliation.

“I also complained about the government inability to set up programs such as bringing relief materials to homeless people, rehabilitation program, resettlement program, reconstruction program of any sorts,” he said.

Gata described his ordeal on Facebook on Friday evening, writing that “more than a dozen soldiers stamped into my house and picked me, bundled me, threw me into their vehicle, took me to their base, put me into a running tap, asked me to roll on the wet floor and mal-handled me as if I am a criminal, calling me all sorts of names and lavished me with insult.”

Kyle Abts, director of the International Committee on Nigeria, said the government of Plateau State “is either complicit or criminally negligent, according to the facts on the ground.” He complained that government security forces had withdrawn from guarding checkpoints in “a well-known conflict area” last month while the killings continued.

“Over 400 have been killed in since 2017. Plain and simple, the security forces abandoned its posts,” he said.

“Fulani militant terrorists who live only three miles away took advantage of the villagers, who lack protection, to launch seven horrific and vicious attacks that centered on churches and schools.”

The claim of torture was denied by Lt.  Colonel T. A.  Ayoola, Sector 6 commander of the special task force.

“I am not aware that my soldiers tortured someone in my sector. We did not receive any formal information from the traditional council or leaders of the community or complaints of torture in any of community I am commanding,” he told Zenger.

But Gata’s experience “tells you something about the army itself,” said the Rev. Akila Adamu, associate pastor of First Evangelical Church in the Washington, D.C. suburbs. Adamu was a resident of Plateau State until 2017.

“A lot of people are scared to say something because when you do, they’ll come looking for you,” he said.

Tina Ramirez, founder and president of Hardwired and a human rights expert, compared the situation in Nigeria with the conflict in Iraq, saying the African country is “teetering on the edge of chaos.”
“Given the cost of American involvement in Iraq in the past two decades, we cannot afford to ignore the rise of extremism in northern Nigeria.  It is a huge economic partner for the U.S. and the African continent; destabilization there would mean additional global insecurity,” she said.
“Religious freedom is not a luxury—it’s a necessity—and we need to prioritize its protection with our Nigerian allies or risk another costly wave of global terrorism and insecurity.”
«Previous Post
China pursues coronavirus ‘mask diplomacy’ in Europe as COVID-19 pandemic cripples EU»Next Post
9 Christians dead in latest Nigeria attack by Muslim tribesmen