Residents reported an anonymous tip that Fulani were planning an attack on three villages in Plateau State, but the military did not arrive until after the attack. 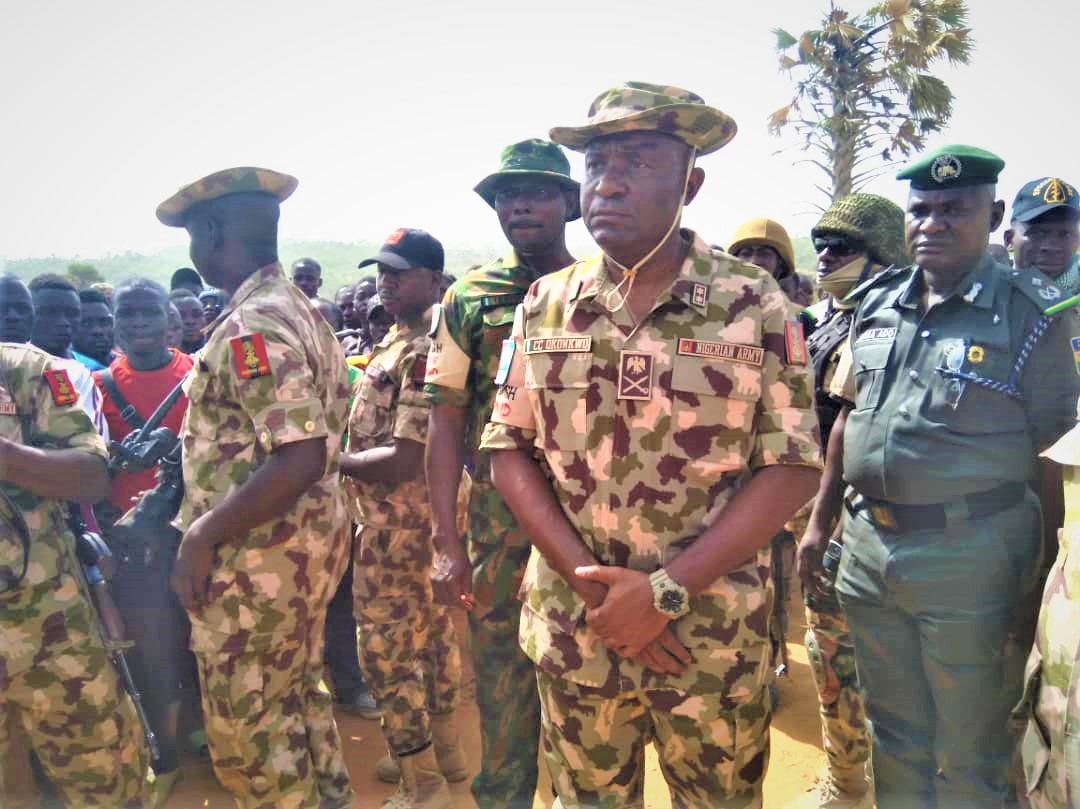 Gen. C.C. Okonkwo and other members of the Nigerian Army face villagers following a massacre in Plateau, Nigeria on April 15, 2020. (Lawrence Zongo/Zenger)

Timothy Weyi tried to get Nigeria military to protect his town from militant Muslims. But six hours later, nine villagers were dead and nearly two dozen homes were razed.

“I called the military unit in Kwall about to urge them to send soldiers immediately to our town of Hura, yet the response of the officer caused my heart to sink,” Weyi told Zenger News. The town got an early warning that herdsmen, part of the Fulani ethnic group, were on their way to attack three villages in Kwall District.

“I called the military officer in the Kwall, the district center, and he said, ‘Did you see any dead bodies?’ I told him no. He hung up the call,” Weyi said.

At 7:30 p.m. Tuesday, about 150 members of the group, which Christians in Plateau State have blamed for a violent spree that has left dozens dead since March, entered Hura shouting “Allahu akbar.”

When the terrorists approached the village in the hard-to-reach rural area, most of the 600 villagers ran into nearby bushes.

“The attack lasted for two hours; we did not see the military officers until after the attack around 11:50 p.m.,” Weyi told Zenger.

Grace Daniel said she had received a tip from a Fulani man that his brothers were coming to attack Hura, Maiyanga and Dundu.

“He refused to tell me his name and where he was calling from, and he had no caller ID,” said Daniel, who notified Weyi.

The Rev. Ronku Aka, the traditional king of the Irigwe chiefdom, came to the burial ceremony Wednesday in Hura.

“I am begging the international community to come to the aid of our people! this killing is too much,” Aka told Zenger. “More than the COVID-19 pandemic in Nigeria, the Fulanis are killing my people. Despite the lockdown,” Aka said.

Nigeria has 373 confirmed cases and 11 people in the country have died of coronavirus, according to data compiled by Johns Hopkins University. Earlier this week, the government extended a lockdown of the country’s major cities for 14 days.

“We hear daily how Nigeria’s officials are trying to alleviate the spread of COVID-19,” said Kyle Abts, executive director of humanitarian organization International Committee on Nigeria. “Meanwhile, people in Plateau State are being slaughtered right under their noses. Local, state and federal government response have behaved shamefully. The military continues to be negligent in their handling of the situation.”

Major General C. C. Okonkwo, who took command of the sector covering Kwall only a month ago, did not acknowledge deliberate inaction by his forces, but promised more soldiers would be deployed. “I felt bad, please always give us useful information that will help us to get the criminals, he said at the burial service Wednesday.

“I am the new commander. I am giving you this assurance that these criminals shall be arrested but give us useful information that will help us. Many of the soldiers are in the Northeast, but I will redeploy more soldiers to your community to protect lives and properties,” Okonkwo said.

In late March, the Nigerian army withdrew soldiers from its checkpoints in Kwall without warning or explanation, Weyi said.

“Since the withdrawal of the Nigeria military from our communities, we continued to face attacks. Security personnel always come at the end of every attack to sympathize with us,” said Weyi. “If only the military officer I called came when I called him, lives and properties could have been protected.”

Dan Manjang, the state commissioner for information and communication, told pro-government newspaper the Daily Post the government was aware of the killings in the council area.

“Unless the warring parties come and tell themselves the truth, the situation will continue,” Manjang told Daily Post.

“This is a story calculated to portray a ‘conflict’, rather than a one-sided genocidal massacre,” said Stanton in an email to Zenger about the Daily Post story.

“There was no conflict between the civilians who were murdered and their murderers. This story fails to identify the attacking perpetrators, a Fulani jihadist militia. The villagers undoubtedly identified them to the police and to this journalist. But the police and the journalist intentionally covered up the truth about this massacre. This is genocide denial.”