North Carolina native Nick Neptune sees his position as manager of the Transfer Co. Food Hall as a bridge between the community's past and future.
By Dan Holly April 13, 2020
Facebook
Twitter
Linkedin
Email 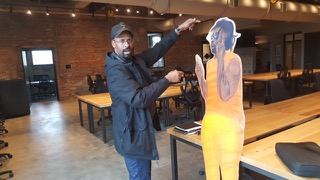 Nick Neptune shows a life-sized portrait of a hip hop artist as part of his effort to make the neighborhood feel welcome at the Transfer Co. Food Hall on March 13, 2020. (Photo Courtesy: Nick Neptune)

RALEIGH, N.C.—At 3 p.m. on a Friday, Nick Neptune walked out of his office and stepped into the food hall he manages. He did not like what he heard: The music was just too loud.

Neptune likes the beat-driven pop rock he pipes into the cavernous hall. But “how is an elderly black woman from the community going to feel, coming in here and hearing that?” he said.

He turned it down with an app on his phone.

The food hall was not yet full for dinner. Thirty or 40 people waited in line at food vendors along the walls, sat at tables in the hall’s center or filled the stools at the huge bar on one side.

Whether the community feels welcome in the trendy space that can feel decidedly out of character in the working-class black neighborhood where it sits is something Neptune worries about. Neptune is black himself. He thinks about it a lot.

Gentrification in Raleigh, as in other U.S. cities, has the potential to displace black residents from their communities. But Neptune won’t be a part of that process if he can help it.

“We’re seeking to facilitate a space and an environment that no matter who you are or where you come from you feel welcome and embraced in this space,” Neptune said.

In Raleigh—a fast-growing city of almost 500,000 residents—leaders have fought against gentrification, mostly by pushing for affordable housing. Doing something to keep poor and middle-class people from being priced out of their neighborhoods has been a hot issue in the city’s elections, bringing officials and community leaders together.

Community members have seen developers building expensive homes and trendy restaurants in their low-income neighborhoods for two decades. They don’t see them as allies.

Neptune wants to be an ally. He is more into music and entertainment than political activism, but he understands the problem.

“Those of us who maintain that awareness are, remarkably, in positions to address it,” he said. His job as general manager of the Transfer Co. Food Hall “is an example of the progress we have made. … It’s our responsibility to do something about it.”

How the 34-year-old got to where he is provides an excellent example of luck meeting preparation.

Neptune was born in Fayetteville, North Carolina, and his family moved around before settling in Winston-Salem. His father was in the U.S. Army, stationed at Fort Bragg, and his mother was a student at Fayetteville State University when the two met. His parents valued education.

“They made it very clear that, ‘We expect you to get As and Bs. We expect you to do your best and nothing less,’” Neptune said. Neptune went to college at the University of North Carolina at Chapel Hill.

Racism was real: He was occasionally stopped by police for no reason. But he saw friends and relatives making bad decisions and was determined to do well himself. He pursued a career as a teacher after college, focusing on students with disabilities or from disadvantaged backgrounds.

Neptune was in his early 20s and working for a Charlotte program to prepare students for college when a friend lured him across the state. “Raleigh is popping off,” Neptune said the friend told him.

He picked up and moved, and opportunities knocked.

A friend told Neptune over coffee in 2014 that a DJ had canceled on his wedding. He had never been a DJ before, but he volunteered.

Neptune talked to local DJs and bought a $1,000 controller. “I wanted to do the best I could,” he said.

The wedding was well-attended. “After the DJ job, I got all kinds of interest,” he said. Neptune launched the Good Times Assurance Company and quickly got a year’s worth of bookings.

“It was just popping,” he said, shifting gears to entertainment as “an alternative path to reach and uplift a community.”

Neptune’s entertainment company produced a fundraiser in 2016—a “full-scale party,” he said—at a property owned by local real estate developer Jason Queen. A year later, Queen decided to open a food hall in an old, vacant building on the edge of downtown, in a low-income but rapidly gentrifying part of the city.

To honor the building’s history as a bus depot, Queen called it the Transfer Co. Food Hall. He asked Neptune to be its general manager when it opened in January 2019.

Neptune had no food industry background but Queen’s concept, reconnecting Raleigh with the historic neighborhood, fit with his sensibilities. Queen, who is white, lived in the neighborhood and had renovated dozens of houses there.

The Transfer Co. Food Hall’s offerings include Italian specialties, Indian street food and Argentinian pastries. That’s not typical working-class urban fare, but the locals like it.

Zayvion Allen, 19, who is black and grew up in Raleigh’s Chavis Heights community, not far from the new food hall, visited recently with friends. “I always feel welcome here,” he said while waiting with friends at Captain Cookie and the Milkman. “They have good fresh-cut fries, and I really love the cookies,” he said. “And the people are friendly.”

The Transfer Co. Food Hall’s vendors, with Neptune’s encouragement, actively seek workers from the surrounding neighborhood. At the far end of the property sits a vacant lot that will soon become a supermarket.

“A grocery store hasn’t been seen in this neighborhood in a decade. … We’ve got a food desert here,” Neptune said.

The benefits are not isolated, according to a Federal Reserve Bank of Philadelphia study published last year that showed gentrification can benefit low-income communities since it increases the property values and overall wealth of longtime resident homeowners.

Neptune is at the center of the city’s reconnection with the historic neighborhood. He believes in small gestures, too, like art hanging on the walls. He displays life-sized portraits of hip-hop artists who the neighborhood’s young people instantly recognize.

“The kids were taking pictures with them,” Neptune said of the paintings.

And, of course, he makes sure to take care of the older residents. That means making sure the music isn’t too loud.