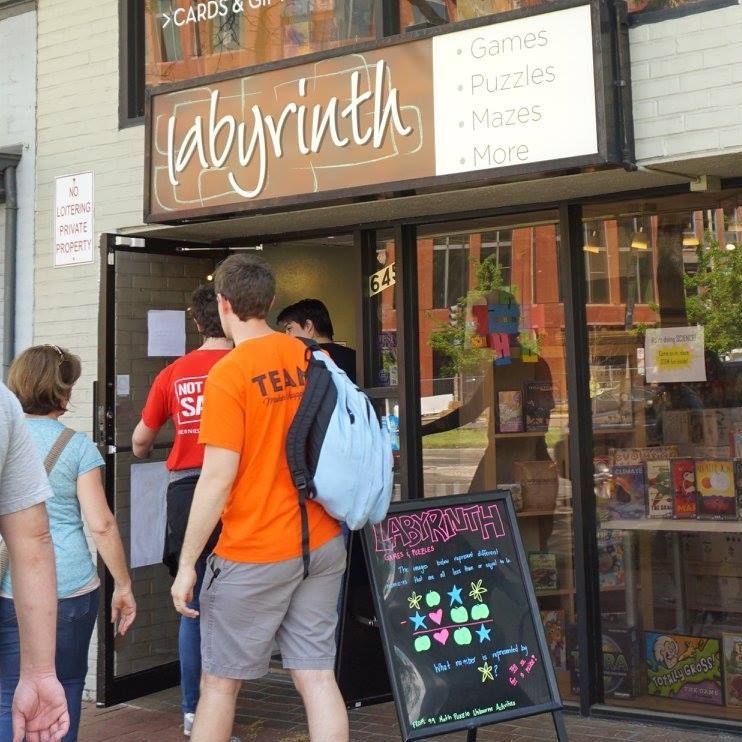 Labyrinth Games, a game store in Washington, D.C., is just one of many small businesses closed because of the coronavirus pandemic.

Small business owners are trying new things to keep going during the coronavirus pandemic, but many worry the federal government’s stimulus money won’t be enough.

Kathleen Donahue, who owns Labyrinth Games, a board and tabletop games store down the street from the U.S. Capitol, tried delivery and curbside pickup orders until Washington, D.C. officials ordered all non-essential businesses closed on March 25.

Federal administrators, banks and lenders are facing unprecedented challenges as they work to disburse $350 billion set aside in the Paycheck Protection Program to aid small businesses like Donahue’s.

Donahue told Zenger News she has “no idea” when she will get federal funding to save her popular game store, a mainstay of the Washington’s Eastern Market neighborhood.

If Labyrinth can’t reopen by May, Donahue says, the store may close its doors permanently.

In an April 6 Facebook post, Donahue wrote: “Hey folks who work at the Capitol, just a little small business feedback. The Coronavirus rescue plan is not working, and is an absolute mess, especially for businesses like Labyrinth. My bank, Wells Fargo, is not even taking applications yet. They asked us to fill out a form of interest, and have now said that they received so many responses that they aren’t even accepting any more requests for assistance. That was in 48 hours. We submitted our request first thing in the morning on Saturday, and have not received any notification yet. I’m praying that I somehow get relief in some way, but we don’t have much time. We can make it until the end of April, but we cannot pay bills in May, and will not survive if we have to stay closed in June, or God forbid, July.”

The Small Business Administration, which is responsible for disbursing the money through 1,800 banks that participate in its lending program, typically gets a maximum of 800,000 applications for aid in any given year, said Meenaz Sunderji, vice president of partner growth at Zafin.

The agency received about 200,000 applications in the past week, Sunderji said, and that number will keep growing.

“There are 30 million small businesses in the U.S.,” Sunderji told Zenger. “And they don’t have enough federal funding to serve all the businesses that are impacted.”

Donahue said the biggest problem is “the lack of information, and that the information keeps constantly changing.”

“I’ve spent probably eight hours trying to figure out these 7A payroll protection loans, and nobody knows anything,” she said. “I finally got a call this morning from my bank saying the application is supposed to open tomorrow. I was on hold for two hours with Wells Fargo the other day, and it’s just the fact that things are changing so quickly and there’s not good information coming from anywhere.”

Donahue said she already applied for a microgrant from D.C., but worries whether that grant will interfere with any federal money she might get through the federal aid program or the SBA’s Economic Injury Disaster Loan program.

“If you get a microgrant, will that affect your ability to get another grant, how is all that working?” she asked. “I finished the federal application last weekend, but then they completely changed the application and said you had to reapply, so I went and reapplied with the new form. I got an email back from D.C. that said thank you for applying, but I got nothing from the federal. I’m pretty much just scared all the time.”

The banks like Bank of America whose processes are more automated and digitized, Sunderji said, will be the best positioned to respond to this crisis.

“Obviously this is brand new to all banks in the U.S. market,” he said. “Banks are at different stages of their evolution when it comes to digitization and automation of their processes, and I think the challenge is the ability to enact change quickly.

While big banks are inundated with applications and calls for help from small businesses, independent community banks are also struggling.

“Hundreds of lenders are still trying to get approval to access the SBA system so they can process loans,” the association’s President Rebeca Romero Rainey wrote in an April 5 letter to U.S. Treasury Secretary Steven Mnuchin.

“Please do everything in your power to support and enhance the overburdened Small Business Administration systems. Both existing SBA lenders and non-SBA lenders are experiencing massive delays and inability to process loans or even access the SBA to become an SBA lender. We recognize that these systems were not created to handle the volume of applications they are seeing today, but we must work with the systems we have.”

Streamlining and accelerating the disbursement of federal funds is critical, Sunderji said, because the longer the delay, the more likely thousands of small businesses will be forced to close their doors permanently.

“So can the Treasury and others help community banks to make sure they’re getting the funding quickly so they can disperse those funds? That is critical to getting this money out fast. On average, a small business usually has approximately 30 days of operating cash. After that they don’t have a choice but to close down, and the whole idea of a stimulus package is to prevent them from closing down.”

To prevent widespread small business closures, Sunderji thinks the feds should explore other avenues for getting funding to small businesses, like fintechs.

“There are fintechs that already provide small business loans to folks and can give it to people in 24 hours,” he said.

In the meantime, Donahue and the team at Labyrinth are working hard to provide virtual game tournaments and game nights for their loyal customers. On the last day Labyrinth offered deliveries and curbside pickup, the store completed more than 300 sales and 50 deliveries.

In the first week after Labyrinth halted deliveries and curbside pickup, it sold 264 gift cards through the store website.

“It’s certainly been stressful, but I think some of the positives that have come out of this was I had no idea how many people cared so deeply for our business until this happened,” Donahue said. “It’s overwhelming all the email support I’ve gotten, but the number of people who have bought gift cards and said ‘We can’t imagine a world without Labyrinth’ has been unbelievably gratifying.”

“When we were doing the curbside pickup, I had people come from Baltimore, and we were doing deliveries out to Arlington and Alexandria and all the way up to Chevy Chase,” she said, describing suburbs in Maryland and Virginia.

“I didn’t realize how much we affected people, and it’s really amazing to me. One guy sent me this email about how he was super depressed when he first came to D.C. and he went to a Labyrinth game night and ended up making some friends. I can’t imagine a world without businesses that do that kind of stuff. I think it would be really sad and i don’t know what to do about it,” said Donohue.