Masked activists including one carrying a rifle shouted “You are the virus!” at government officials who have kept their jobs while much of the Buckeye State is out of work.
By Ford Fischer April 10, 2020
Facebook
Twitter
Linkedin
Email 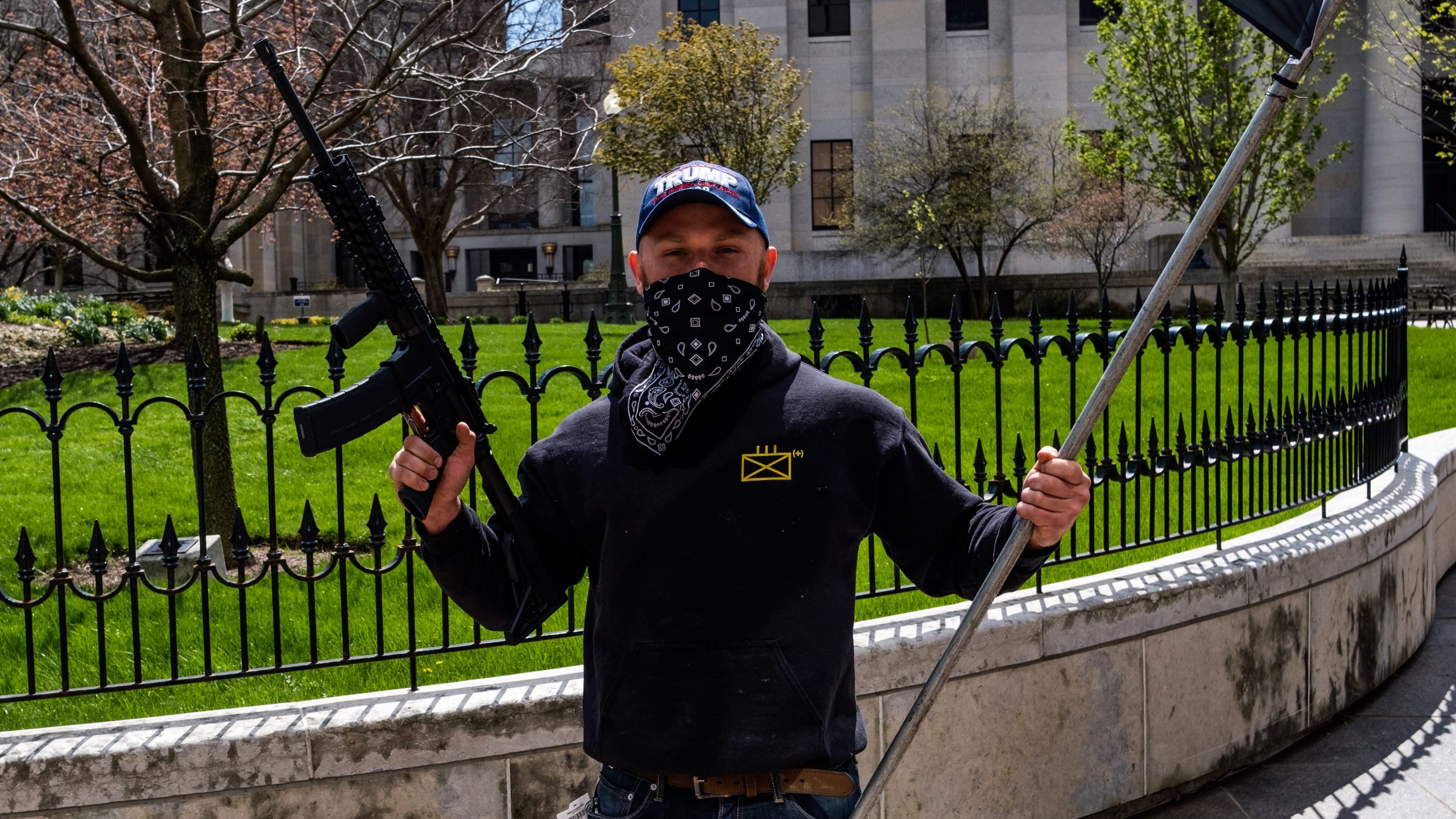 Masked activist Ben Shuler displays a semi-automatic rifle outside the Statehouse in Columbus, Ohio on April 9, 2020. Shuler was part of a protest against government stay-at-home quarantine directives stemming from the COVID-19 pandemic. (Carter Adams/Zenger)

Nearly 100 protesters descended Thursday on the Statehouse in Columbus, Ohio in defiance of Gov. Mike DeWine’s coronavirus stay-at-home order, claiming it violates their constitutional rights of freedom of assembly and freedom of religion during the Holy Week that precedes the Easter holiday.

Most of the protesters stayed six feet away from each other, following the government’s social distancing guidelines.

The stay-at-home order, recently extended to May 1, is intended to curb the disease’s spread. But Ben Shuler, a masked political activist carrying a semi-automatic rifle, told Zenger News that the restrictions infringe on his rights.

“The Democrats have come out saying the boogeyman is out to get you and, ‘If you give us your freedom we’ll protect you,’” said Shuler.

Nationwide public health guidelines have emerged from the administration of President Donald Trump, a Republican. Ohio’s governor is a Republican, as are solid majorities in both houses of the state’s legislature.

Shuler sported a Trump 2020 campaign hat and held a flag depicting a Spartan helmet along with the words “Molon Labe” in Greek letters. The phrase, meaning “come and take them,” is attributed to King Leonidas of Sparta—a defiant comeback to a Persian demand that he order his soldiers to lay down their weapons.

The line also became a prominent slogan during the Texas revolution in 1835.

Thursday’s protest was planned without a permit, in a secretive social media whisper campaign designed to avoid a large police presence. State troopers kept their distance—from both the activists and each other.

They made no move to disarm Shuler, who was obeying an Ohio law that allows legal gun owners to openly carry them, fully loaded, in public. He would not have been permitted to enter the statehouse with his weapon.

Many protesters wore Guy Fawkes masks, associated with the online hacker group Anonymous, and complained about government overreach and constitutional rights while declining to reveal their names.

The shouting protesters were audible inside.

“I don’t know if you can hear on television, but there are people protesting right outside the statehouse,” said Acton. “And people are worried, they’re afraid. They’re worried about things like their jobs. But we have to keep pushing forward with Ohio’s plan for getting through the crisis. It’s working.”

“Business is shutting down, the economy’s doing horrible, it’s not good for anybody in Ohio and it’s going to take decades to get back,” said Scott Shoemaker, who spoke through the fabric of an American flag he was using as a mask.

“I’m out here today because I’m tired of it,” Shoemaker told Zenger.

Protest signs visible on Thursday included one that demanded, “Let my people go. To school, to work, to parks.” Another one claimed social distancing is “social conditioning.”

Led by a woman holding a small red bullhorn, the shouting included complaints that lawmakers and other government employees have kept their jobs while private-sector employers have been laying workers off.

“You are the virus!” they chanted.