Kenny Westray started out selling his clothing line out of the trunk of his car. Now more than 200 NBA players have worn his designs. 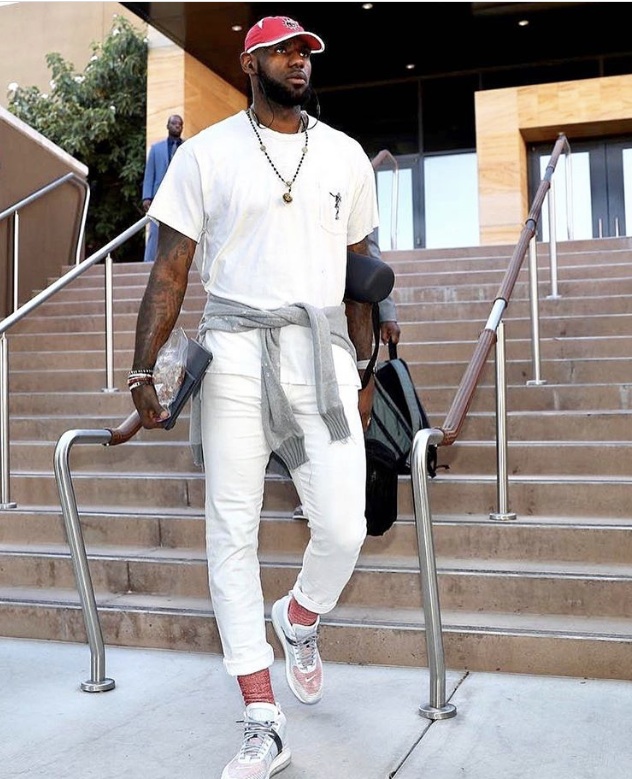 LeBron James is just one of the NBA stars who has worn We Are One gear. (Photo courtesy Kenny Westray)

Kenny Westray has battled to stay relevant in the clothing game for decades—and he has the scars to prove it. Westray, now 53, suffered a gunshot to the mouth when he was 24 and seven stab wounds a year later.

But he told Zenger News he had to go through that pain and trauma to get to where he is, on the precipice of celebrating 28 years as one of NBA players’ go-to clothing designers for athletic wear. While many players have deals like LeBron James’ mega-contract with Nike, it is routine to see James, Kevin Durant and many other NBA players sporting Westray’s brand, We Are One.

“I haven’t really sat back and thought about the journey,” Westray said. “I had no idea I’d still be in business 28 years. But I thank God every day.”

Westray spent five years in prison on a drug charge, but he said his life of crime turned around after his second near-death experience. A friend shot him in the mouth during an argument over drugs one year and he was stabbed multiple times during a drug deal gone wrong the next.

When he was released, he found a job at The Athlete’s Foot in the Maryland suburbs, selling sneakers. He was quickly promoted to manager, moved to a Washington, D.C. store and helped it earn $2 million in a year.

Finally, he was responsible for the sale of clothes in the store, which was when it clicked for him. “I found my niche,” he said.

“I was pronounced dead twice,” he said. After the stabbing, “I thought I saw my grandmother and mother say, ‘That’s two strikes.’ That’s when I put down the drugs and picked up the T-shirts.”

He parlayed the sewing and designing skills he developed in junior high school into a business in 1992. He used $2,000 of his savings to launch We Are One, selling athletic gear out of the trunk of his Honda. It was stylish and trendy, “urban classic” style, Westray recalls.

It was a hit because Westray’s designs featured oversized pockets that accommodated the large hands of athletes and prevented wallets and other items from falling out.

“They appreciated that part of my designs,” he said.

His friend, former NBA star Sam Cassell, was among the first to sport We Are One. “I met Kenny and we just clicked,” said Cassell, now an assistant coach for the Los Angeles Clippers. “He said, ‘I got something for you.’ It was some of his gear. I loved it.”

Cassell helped spread the word of We Are One to his NBA friends, like Nick Van Exel, Sherman Douglas, Steve Francis, Dennis Scott, Eddie Jones, Penny Hardaway, James Posey and Nick Anderson, among others.

Westray quit The Athlete’s Foot and opened Alpine, a storefront on D.C.’s Florida Avenue, not far from Howard University. “I was just hoping to make $250 a day to pay my rent that first year,” he said.

The success inspired him to open eight more locations in metro D.C., Baltimore and Houston, where he moved, met Master P and ran the rapper and entrepreneur’s No Limits clothing line for four years.

Westray’s brand continues to flourish. More than 200 players have donned his gear—a monumental feat for an independent operation—including James and Durant.

“What Kenny has done with his brand is outrageous,” Cassell said. “To take an inner-city, urban brand in the ’90s and elevate it to where at one point at least 60 percent of NBA players were wearing it, that’s pretty remarkable. Even coaches wore it.”

Through former Denver Nuggets general manager Kiki Vandeweghe and executive Tommy Sheppard, We Are One gear in 2002 was sold in the team’s NBA Store in the area. It was also sold in arenas in Milwaukee and Houston and elsewhere.

The “We Are One” title became a rallying cry in 2014 when tapes were released of former Los Angeles Clippers owner Donald Sterling making a series of racist comments. Clippers coach Doc Rivers wrote “We Are One” on the chalkboard in the locker room as a rallying cry for his mostly black players.

Soon, countless players around the league were wearing shirts with “We Are One “on them—but it was Westray’s trademark. Vandeweghe, who had moved to the NBA office by then, realized it, called Westray, and he and the league worked out a multimillion-dollar deal to use the phrase.

It was significant to Westray because he came up with the name to have multiple purposes. Originally, it was about him and two friends uniting as one, an idea confirmed when the song “We Are One” by Frankie Beverly and Maze blared from a convertible’s speakers as the thought popped into his head. “’In the spirit of God, We Are One,’ is really the brand,” he said.

And “now, as we deal with the coronavirus, it’s about We Are One, ” he said. “We have to work together, be one, to get past this.”

Westray filed a lawsuit against The Gap for using his trademark without permission, and after two years of wrangling, won a significant settlement. The money aside, Westray enjoys the business the most when he is creating. The 2008 financial crisis and gentrification combined to force him to close all but one store in Maryland, which is temporarily shuttered because of the coronavirus pandemic.

But he has extended his products to include jackets, button-up shirts, women’s and children’s clothes. He said he designs 90% of the products he retails.

“It’s the best when I am designing,” Westray said.

He still gets pleasure out of seeing people wearing his creations, like when he says rap mogul Dr. Dre told him, “Man, your clothes are so comfortable.”

“You feel good about yourself when stuff like that happens,” said Westray. “All this time, it still feels good.”