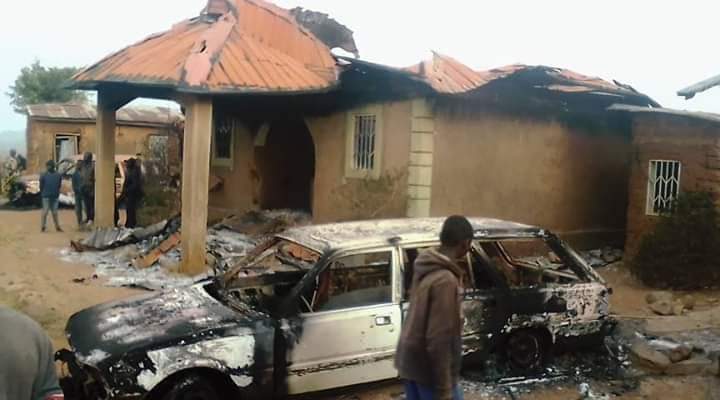 Buildings in Ancha, Nigeria are shown burned out after hundreds of Muslim militants descended on it late Tuesday, March 30, 2020; it was the first in a series of deadly raids on Christian villages, some of whose victims were burned alive. (Lawrence Zongo/Zenger)

ANCHA, Nigeria—Armed hordes of Muslim militants rampaged through villages in central Nigeria this week, killing unarmed farmers and burning people alive in their houses. In a nation of 204 million people where COVID-19 has killed only two, it’s mass murder that is tearing society apart.

“More than 200 Fulani herdsmen came to my community to kill us yesterday,” said Monday Bato, a farmer in the village of Ancha, home to 1,800.

“They all had military guns, AK-47. They were speaking Hausa and Fulani language as they burned my house and 16 other houses, including all [the] harvested grains and vegetables,” Bato told Zenger News on Thursday.

Community watchmen called the nearest police division in Bassa, 1 hour and 40 minutes away by car. No one answered.

“I tried calling the security, but their number was not going that night,” said David Chinge, who serves as secretary to the king of the region’s Irigwe Chiefdom.

Nigeria’s Fula ethnicity comprises 15.4 million people, nearly all of them Muslims. President Muhammadu Buhari is among them. Their numbers are spread across at least 18 African nations.

All of them were burned alive, according to Christ Gado, a Hukke resident. “We had 23 houses set ablaze,” he said.

On Wednesday night was the nearby town of Nkiendoro, home to 750 people. The militants’ arson fires consumed two houses and their stored food, neighborhood watchman Sunday Josiah told Zenger.

“I called the divisional police officer that night,” Josiah said, but impassable roads meant “they could not come until the following day.”

A pastor encouraged his flock Wednesday during a burial for the three Ancha victims to “leave everything to God in prayer and trust in God alone.” The Rev. Ayuba Umaru, pastor of the Evangelical Church Winning All in Miango, also called on his nation’s leaders to protect Christians’ lives.

“We are Christians. We should be calm and seek the face of God,” he said. “Jesus Christ was also persecuted. At this time we should be more close to Christ.”

“COVID-19 is a disease from China that killed a lot of people, but what we know in our community [is] that the Fulani terrorists are killing us,” he said. “The Nigeria government should take action on killings by Fulani, just like the action they are taking to stop COVID-19.”

The police commissioner of Plateau State, a sprawling territory of more than 4 million, on Thursday visited Hukke, the second town targeted for slaughter.

Isaac Akinmoyede arrived in his protective mask, careful not to risk a coronavirus infection. “Anybody with useful information regarding the killings should report to the police, and they will ensure justice,” he said, discouraging vigilantism.

As a group of mourners left Hukke, the deputy chairman of the region’s Bassa Local Governance Area was driving the other way in a chauffeured Jeep. The official, Adamu Gweni, had missed the burials by more than three hours.

He rolled down his window and offered the local equivalent of $8 to a relative of one victim. With villagers grumbling about hospital bills for the survivors and a lack of aid for the suddenly homeless, Gweni’s driver sped off in his pepper-red vehicle.

Human rights observers and African NGOs are documenting a rising tide of deaths. “More people are dying from terrorist violence in Nigeria than from COVID-19,” said Kyle Abts, director of the International Committee on Nigeria.

“Ten people were killed by Fulani militants in one local government area compared to two who died from Covid-19 in the entire nation of Nigeria. Government troops have done little, if anything, to prevent the violence,” Abts told Zenger.

“Local vigilantes are without bullets to protect themselves, injured citizens are hospitalized without the means to pay their bills, and the governor is silent.”