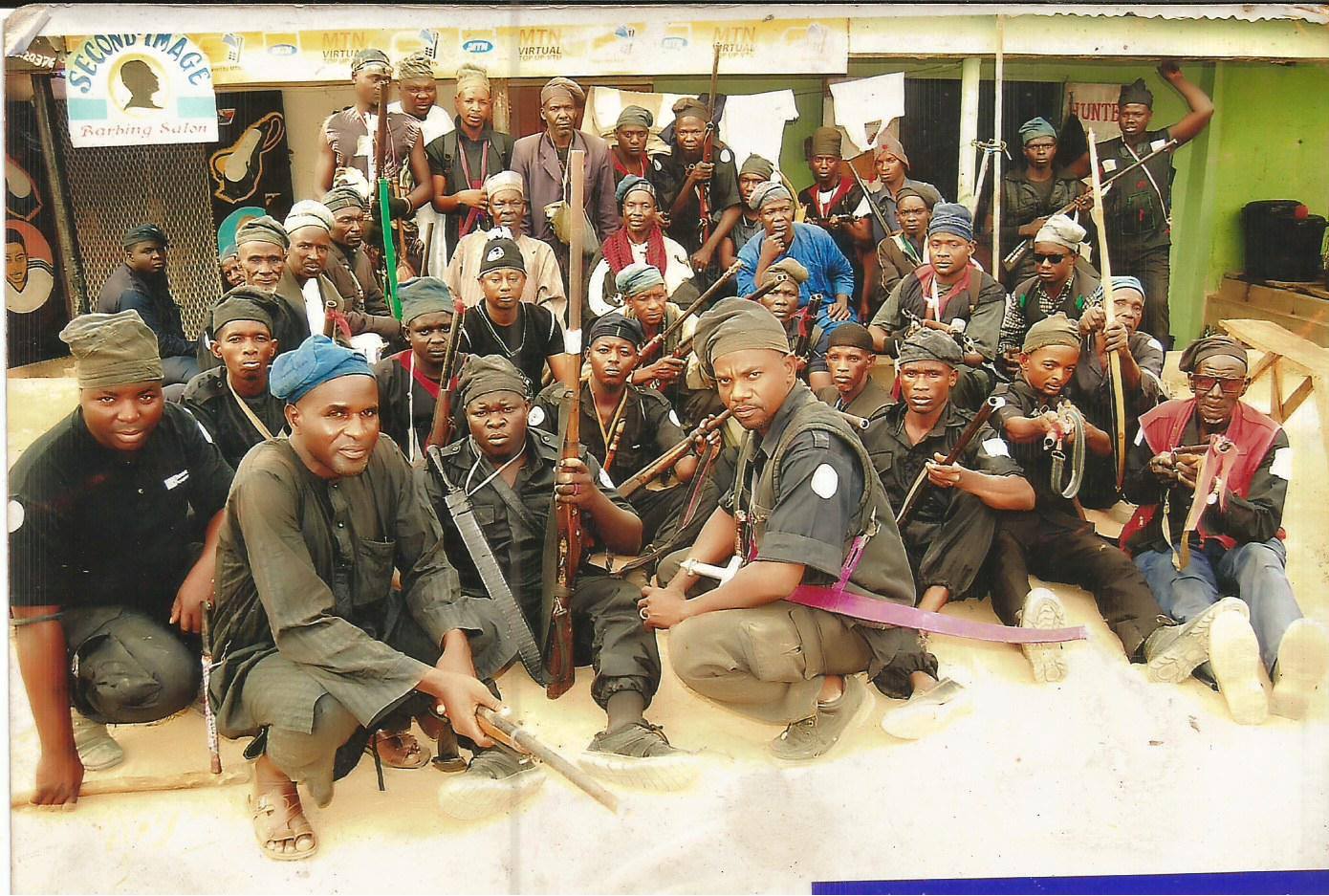 Traditional Nigerian hunters in Adamawa State posed in May 2019 with their rifles, mostly improvised weapons and antiques. They hunt lions, monkeys and antelopes in large groups, the kind of gathering the COVID-19 scare has made illegal. (Hunters Association of Nigeria/Facebook)

The despondent group wasn’t worried about the spreading pandemic that has paralyzed the metropolis of Lagos hundreds of miles to the west. Fifty-five-year-old Halima Baba Bukar was upset that her antique single-shot antelope rifle would be silent.

The gloom around the teapot March 26 was about the government-commanded cancellation of the consecration of the hunters, an annual days-long gathering that draws thousands who hunt monkeys and lions–and sometimes Boko Haram terrorists.

“We were set for our yearly consecration ritual and renewal of our vows when our overall boss of all hunters in northeast Nigeria ordered the event indefinitely postponed because of the government’s prohibition on gatherings larger than 50,” Bukar told Zenger News, standing with her precious gun in the door jamb of the Adamawa State headquarters of the Hunters Association of Nigeria.

Wildlife aren’t Bukar’s only quarry. She has led Nigerian army units into the forest in search-and-destroy missions against Islamist terrorist insurgents. The office where she works is in Yola, Adamawa’s capital. It’s home to the vast Sambisa forest where thousands of Boko Haram militants have operated from concealed military bases for a decade.

Alhaji Mohammadu Usman Tola, the hunting association’s chairman, gave the order to scrap this year’s consecration ritual despite the lack of any coronavirus cases in Adamawa.

As Africa’s most populous and wealthiest country, though, Nigeria is a bellwether for all of West Africa. Members of Nigerian President Muhammadu Buhari’s cabinet have tested positive. The governors of Bauchi and Kaduna states are self-quarantining after contracting the viral infection. And cases in the teeming metropolises of Lagos and Abuja comprise most of the country’s 190 confirmed diagnoses.

But to the hunters in Adamawa sipping tea and sharing war stories, their sick countrymen might have been a world away.

“We would have gone there by the thousands for the annual oath, because none are scared of the coronavirus, but we are under an authority and we must obey it to the last command,” Bukar said in her native Hausa language.

“I am the woman leader of all the women hunters in the North East of Nigeria,” Bukar told Zenger. “Of course I’m a woman, but I have never fainted in battle or gotten tired during the day. And what a man can do, that I will certainly do.”

A local blacksmith made Bukar’s rifle decades ago. It’s an example of primitive weapons knows in Nigeria as “Dane guns.” She has used it for 40 years to hunt lions and human targets, one shot at a time.

“My Dane gun is more than words can say. It’s better than an AK-47,” she said. “I have been using it to fight Boko Haram since 2014, and it has not failed me once. My one bullet has triple effects, because our ancestral spirits, who are hunters are always with us to protect us.”

It takes more than five minutes for her to reload her rifle: She must pronounce Voodoo incantations before pulling the trigger again.

Hunters in Nigeria were joined by the nation’s senior clergy in contempt for nationwide precautions designed to slow coronavirus’s spread—at least during the pandemic’s first few weeks.

Some megachurch founders rejected orders to shut their doors to worshipers, preaching to thousands on Sunday, March 22. Bishop David Oyedepo, founder and general overseer of Living Faith Church, also known as Winners’ Chapel, was one. His denomination has branches in the United States.

In an alabaster white suit and his signature red tie, Oyedepo told his flock the “plague” virus would not intimidate children of God. He changed course eight days later, complying with the lockdown.

He told believers last week that “only God can save Africa from this pandemic.”

Islamic cleric Sheik Sani Yahaya Jingir, leader of the popular Salafist group known as Izatala, told a mass gathering on March 13 that President Donald Trump had invented the coronavirus to prevent Muslims from performing the Hajj pilgrimage to Mecca.

Thousands of chanting Muslims, arms raised, marched in defiance of the stay-at-home order on March 27 in the Plateau State city of Jos. Nigerian police arrested Jingir for misleading his worshipers.

As pandemic panic settled on Nigeria’s leaders in late March, the country’s top Islamic cleric ripped fanatical preachers for opposing the public health ordinance. Alhaji Muhammad Sa’ad Abubakar, the Sultan of Sokoto, blasted them for their lack of “Islamic knowledge.”