Ben Schiffer and his wife Rebecca Starr found themselves stranded in Australia with no flight, no job and no idea what to do next. Schiffer, assistant head of rigging for Cirque du Soleil’s Kurios, had been touring with the company for five years straight. As the entertainment industry faces the cost of the coronavirus crisis, […] 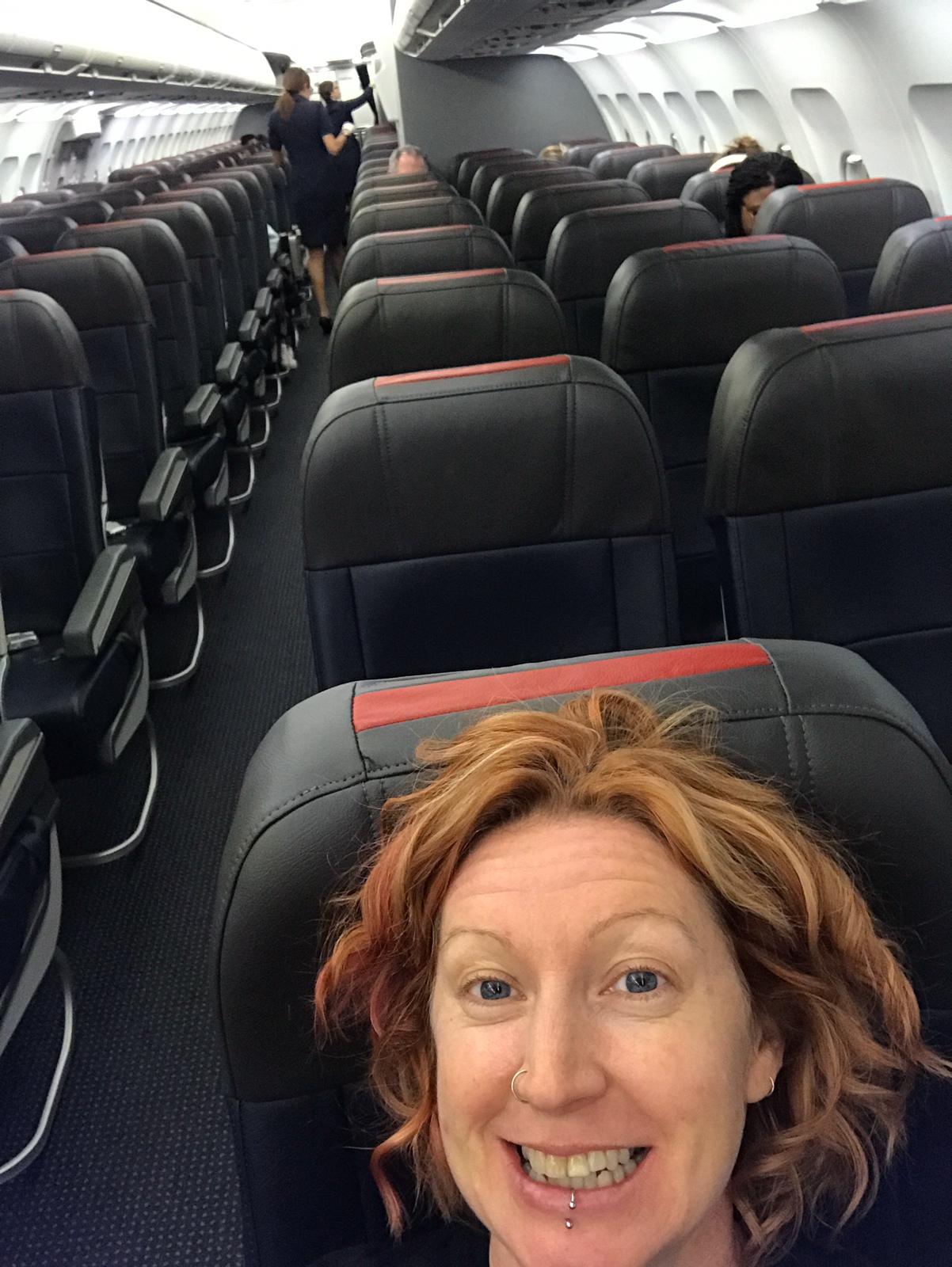 Rebecca Starr smiles on a near-empty flight after she and her husband were stranded in Australia because of the coronavirus pandemic. (Photo courtesy Ben Schiffer)

Ben Schiffer and his wife Rebecca Starr found themselves stranded in Australia with no flight, no job and no idea what to do next.

Schiffer, assistant head of rigging for Cirque du Soleil’s Kurios, had been touring with the company for five years straight. As the entertainment industry faces the cost of the coronavirus crisis, Cirque du Soleil has suspended all shows and let 95% of its staff go.

The couple had been on the road so long that they didn’t have a permanent home. They had to quickly decide where to hunker down and wait for the pandemic to end. The company offered all its employees flights home, but Schiffer and Starr declined the offer.

“At first, we thought we would go to New Zealand,” Schiffer told Zenger News. They were drawn to stay in New Zealand because of how they perceived the country’s progressive policies, as well as noting its relative isolation from the rest of the world. But that plan fell through when New Zealand closed its borders to all noncitizens.

The couple contacted the U.S. consulate to no avail; they say they were told that help was being offered only to those who already had tickets home.

“We decided we would just pack all of our things—it took about an hour and a half—and head to the airport.” Schiffer said. “We hoped someone there could help us.”

After a few tries, they found a friendly, competent travel agent who was “helping us and a group of about five Eastern-European travelers at the same time.” The agent booked them a ticket home on one of the last flights out.

Many travelers and expats were caught unprepared when countries began to close their borders in March, and are now stranded in countries they planned only to visit. Government officials from various countries, embassy aides, travel agents and others have been struggling to get everyone back to where they came from.

Some have been successful; many have not.

With airlines cancelling flights and airports closing down for an open-ended period of time, many have had to resort to extreme measures or crazy routes just to get home. Starr’s brother Josh flew home from Melbourne to Kentucky via Sydney, Honolulu and Chicago after discovering his original flight had been cancelled with no notice.

Miki Tzupa, a travel agent with Tama Tours in Israel, said she booked a series of flights home for one client who had been backpacking in El Salvador, routing the journey through Lisbon and Istanbul. When the client arrived in Portugal, the next leg of the trip had been cancelled. The final route home ran through London and a list of standby passengers.

Israel’s national airlines—El Al, Israir and Arkia—are running free or heavily discounted charter flights to repatriate citizens from around the world, even flying to new destinations in order to get as many home as possible. But it’s up to agents like Tzupa to coordinate them, sometimes for 12 hours a day, even though they’re on unpaid leave.

Tzupa feels she can’t stop working while she still has clients who are stuck far from home—in New Zealand, Australia, Peru and Greece—without work or places to stay. She told Zenger she’s heard guesthouses and hotels are shutting their doors rather than help foreign travelers.

The UK government had “designated £75 million to support [partner] flights and airlines to keep costs down and affordable for those seeking to return to the UK,” said Foreign Secretary Dominic Raab in a briefing, as well as having already successfully repatriated hundreds of thousands of UK citizens by working with officials in countries including Brazil, Ethiopia, Spain and Pakistan.

The U.S. Department of State said on its website that it has returned 25,769 travelers from 52 countries.

“The U.S. Government has no higher priority than the protection of American citizens,” the State Department said in a statement, but many citizens have taken to social media reported being left to fend for themselves around the world as understaffed embassies struggle to cope with the logistical and diplomatic effort.

Groups such as “Americans Stranded in Ecuador,” with 291 members, and “Americans Stuck in Peru,” with 5,167 members, allow Facebook users to share tips about getting on airlifts out of the country where they’re stuck.

The administrators of these online groups have created spreadsheets where they keep track of travelers’ locations, ages and medical conditions. Some have heart conditions. Others are physicians who are needed at U.S. hospitals.

In response to letters from elected officials, Secretary of State Mike Pompeo said to Americans stranded abroad in a Tuesday briefing that his agency “remain[s] steadfast and committed to getting you back.” Though he said it’s unclear how long commercial flight options will be available and how many charter flights the U.S. government will be able to arrange, Pompeo urged travelers to register with embassies and ask them for help.