‘There is virus coming to kill people’: Nigerians scramble against COVID-19 while Boko Haram ambushes army 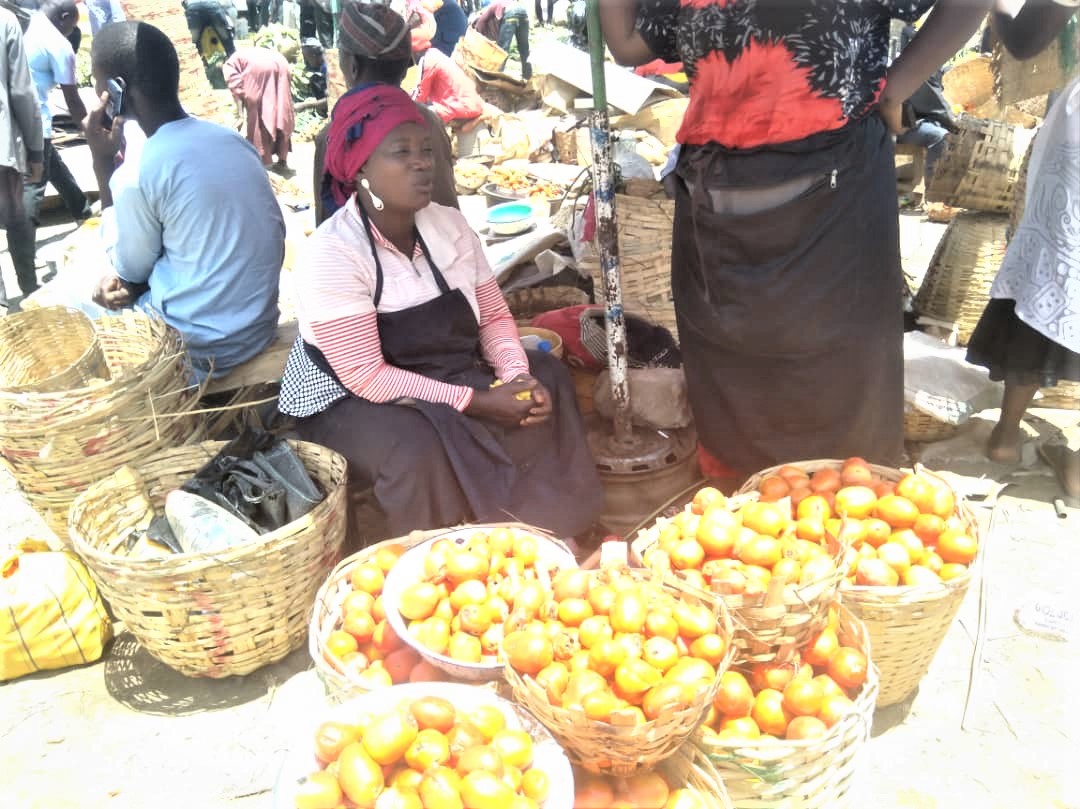 Minke John said on March 25 that shopping foot-traffic at the marketplace in Jos, Nigeria has been reduced to almost nothing since the COVID-19 virus began appearing in the country. (Lawrence Zongo/Zenger)

JOS, NIGERIA—The novel coronavirus has invaded the Nigerian president’s cabinet and Africa’s largest city is on lockdown, but a tomato seller in Jos is sick to death about losing her beefsteak beauties from Ta’agbe.

“I don’t know much about the virus,” Minke John told Zenger News. She normally sells tomatoes, green beans and cucumbers from an outdoor stand in Jos, the capital of Nigeria’s Plateau State.

“A friend from Jos told me not to go to the market last Friday, because there is virus coming to kill people. Now all the tomatoes got spoiled, and nobody is willing to buy from me,” Minke said.

“I drove one hour and 45 minutes from Ta’agbe village in the western part of Plateau State to get to the Jos market. I don’t know how to start over again. I collected a loan, now I can’t pay back the money.”

Suleiman Dauda, a butcher in the same market, hasn’t fared any better.

“I am a follower of Allah,” said Suleiman, dressed in the white tunic and cap of a devout Muslim.

“I am dedicated to my prayer to Allah,” he told Zenger. “I will not be killed by the virus, but the virus affected my business, since many could not come and buy meat last Friday when they announced that the virus is in Nigeria.”

“The virus will only affect the rich people, not the poor masses, because Allah will protect his believers,” Suleiman said. “Only Allah can cure sicknesses, including the virus.”

Lagos, home to 20 million and an industrial hub, was ordered into a total lockdown Monday night by President Muhammadu Buhari.

Nigeria has seen 174 cases of COVID-19 reported. Two were fatal.

The global pandemic has brought panic and confusion into African rural communities where understanding is limited about proper defenses against the mysterious killer. Few in towns like Jos have access to TV, radio or internet. The sudden closure of markets mystifies locals, who find themselves facing severe losses.

“Nobody gave us awareness in the village concerning the virus. I don’t have money to buy a mask, which is very expensive for me, and I strongly believe I never will catch the disease,” said Minke. In a bid to rescue small traders like her, Nigeria’s federal government suspended repayments of credit granted to low-income traders and farmers.

The first reported COVID-19 case there struck an Italian construction-company employee who flew to Lagos on Feb. 24. He was hospitalized, but first exposed others to the virus for three days.

The president tested negative for coronavirus on March 24, according to the Nigeria Centre for Disease Control. Buhari self-quarantined anyway following news last week that his chief of staff Abba Kyari tested positive.

Nigeria’s Twittersphere erupted the same day after social activist Kemi Olunloyo tweeted that Buhari was “very sick with persistent coughing” and claimed he was being treated in “a makeshift ICU” that included a ventilator.

Kyari reportedly exposed other top presidential aides, including Senior Special Assistant for Media and Publicity Garba Shehu, Minister of Information and Culture Lai Mohammed and Minister of Special Duties and Inter-governmental Affairs George Akume. Others who encountered Kyari at a March 17 funeral may also find themselves downstream of his infection.

The governors of Nigeria’s Bauchi, Oyo and Kaduna states have tested positive.

All the nation’s land borders have been closed since March 23, according to presidential aide Tolu Ogunlesi. Buhari’s government banned all international travel a day later.

Terrorist killings of Nigerian farmers in the southern region of Kaduna state added to the misery of the pandemic spreading outward from the urban hubs of Lagos and Abuja.

“In spite of the fear that has gripped Kaduna state over this pandemic, armed herdsmen still lurk over Southern Kaduna destroying communities shedding blood of innocent persons,” the Southern Kaduna People’s Association said in a statement.

“This afternoon, Komo community in Guruku ward, Chikun Local Governance Area came under savage attacks by armed herdsmen. Although SOKAPU has yet to fully identify the victims, no fewer than six persons have been confirmed killed by the rampaging murders,” the group said.

“The terrorists ambushed a military vehicle conveying rockets and bombs that killed at least 47 soldiers and some of the insurgents themselves,” Enenche said. At least 15 others were wounded and are being treated at military facilities.