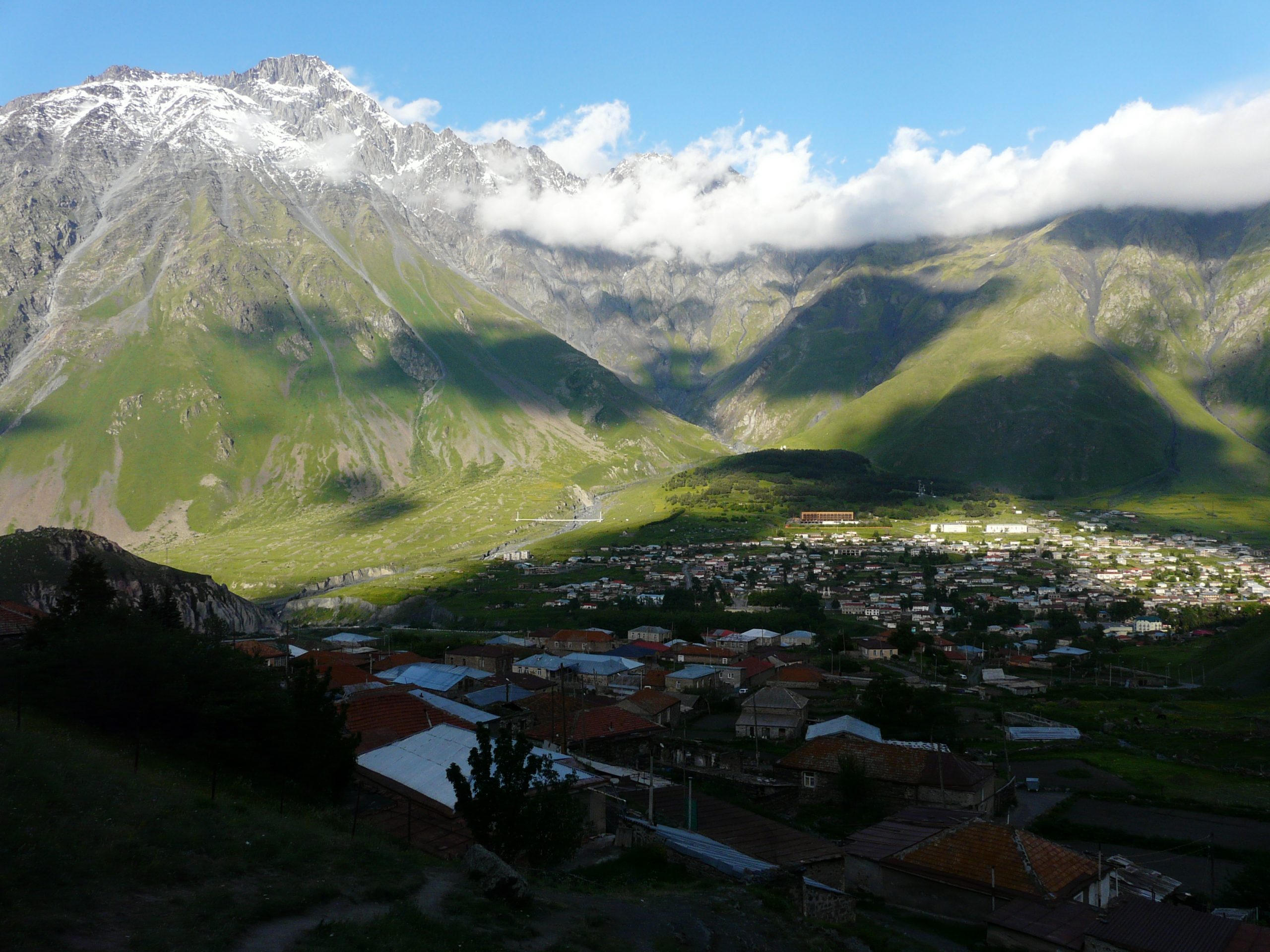 Stepantsminda, formerly Kazbegi, is located in a scenic valley like many villages in Georgia (J. Hammond/Zenger News)

Last year, the Georgia government cracked down on pro-democratic protesters. Now the U.S. embassy is getting involved in a new political agreement hailed by pro-democracy forces in the U.S. ally.

The Trump administration and U.S. politicians from both parties have been concerned about the increasingly authoritarian tilt of Georgia. A new political deal struck earlier this month between the opposition and the ruling government may help further peace in a country which fought a disastrous war with Russia in 2008 and was racked by civil war and secessionist movements in the 1990s—instability that had its roots in the break-up of the Soviet Union.

The U.S. embassy on the outskirts of Tbilisi hosted the final round of negotiations. The agreement between representatives of the opposition and the ruling Georgia Dream party concerns the organization of elections planned for October 2020, which opposition leaders consider an essential electoral reform.

Representatives from both the U.S. Embassy and the European Union facilitated the three-month negotiation process.

A U.S. embassy typically does not directly facilitate political wrangling in a country, but interest in Georgia from prominent Republicans and Democrats may have prompted the move. Both publicly and behind closed doors, U.S. politicians from both sides of the aisle have been actively involved in pressuring the government of Georgia to respect democratic norms since anti-government protests erupted last June.

In an open letter sent to Prime Minister Giorgi Gakharia in December, Rep. Adam Kinzinger, R-Illinois, and Gerald E. Connolly, D-Virginia, urged the Georgia government to accommodate the opposition and allow space for democracy to flourish. The two congressmen also oversaw the passage of a Georgia Support Act in the House of Representatives in October.

Those concerns were echoed a month later in a letter from U.S. senators. “We understand that the promised electoral reform was expected to give proportional representation to Georgian voters to ensure the system did not unduly favor any one political party,” wrote Sens. Jim Risch, R-Idaho, and Jeanne Shaheen, D- New Hampshire, in an open letter to the Georgian government in January, “Your government’s decision to prevent that change indicates a backsliding from commitments to build the institutions of Georgia’s democracy.”

The issue of democracy in Georgia also drew Rep. Pete Olson R-Texas, to compare Ivanishvili to the “Oscar the Grouch,” a character on the television show “Sesame Street,” in remarks on the House floor on Jan. 28th.

“What do Oscar the Grouch and oligarch Bidzina Ivanishvili have in common? They’re both puppets who’ve trashed their homes,” the congressmen said in a tweet, paraphrasing remarks he made in Congress.

Under the terms of the agreement announced on March 8, Georgia will elect 120 parliamentarians using a proportional system and 30 by a majoritarian system. In another gain for the opposition, the barrier for entry to the parliament will be decreased to 1%.

Furthermore, any party that fails to accumulate 40% of the vote will not be able to form a single-party majority in parliament and thus form a new government.

The Georgian Dream Party has ruled Georgia since 2012. The party’s founder is pro-Moscow billionaire Bidzina Ivanishvili whose vast mansion, reportedly home to a collection of penguins and bizarre Henry Moore statues, sits on a prominent hill overlooking historic Tbilisi. Ivanishvili briefly served as Georgia’s prime minister, and many experts say he remains the real power behind the throne in Georgia.

Gakharia rose to national prominence last year when, as Georgia’s Minister of Interior, he oversaw the deployment of riot police armed with rubber bullets and tear gas to crackdown on pro-democracy protesters last June.

“I was particularly shocked to see how the state used aggressive groups, so-called counter-rallies to disperse our peaceful protest violently,” said Shota Digmelashvili, co-founder of the Shame Movement, an opposition group. “It was also the case that the counter-rally participant beat up a peaceful demonstrator in front of me and the police standing nearby did not intervene.”

Scores on both sides were injured. Two protesters were left permanently blind after being shot in the eyes by rubber bullets. Digmelashvili compared the government’s response to Soviet practices in an interview with Zenger News.

The protests also inspired American politicians to pay more attention to the crumbling democratic process in Georgia, a country once hailed as the most democratic in the Caucasus. Georgia is bordered to the north by Russia, to the south by Armenia, and to the east by Azerbaijanthe next election cycle would be contested on a proportional basis.

However, in November members of the ruling party in Georgia’s parliament refused to vote on legislation related to promised electoral changes. The move was meant to ensure that the 2020 general election would be contested along majoritarian rather than proportional lines—as the government pledged after June’s protests.

After new protests erupted in November, the government entered into further negotiations with the opposition culminating in the agreement at the U.S. embassy.

Some issues remain unresolved, such as the fate of arrested opposition leaders and those arrested following anti-government protests in Tbilisi last year. Georgian civil society leaders are concerned about increased politicization of the Georgian jury, which was not considered in the recent political deal. Opposition leaders worry that the government will use the courts to circumnavigate the terms of the March 8 agreement.

“Georgia [has fallen] under [the] effective control of the influential group of judges and the government,” says Eka Gigauri, the Executive Director of Transparency International – Georgia. “This obviously will further hinder the independence of the courts. Moreover, the system could, at any moment, easily be instrumentalized against political opponents or critics of an influential group of judges.“

«Previous Post
Coronavirus cases in Ecuador rise as health minister departs»Next Post
Farage: ‘My ambition is much bigger than Brexit’