A small village’s neighborhood watchmen captured raiders from gang wielding AK-47s and machetes, but not before two civilians paid a price for being Christian. 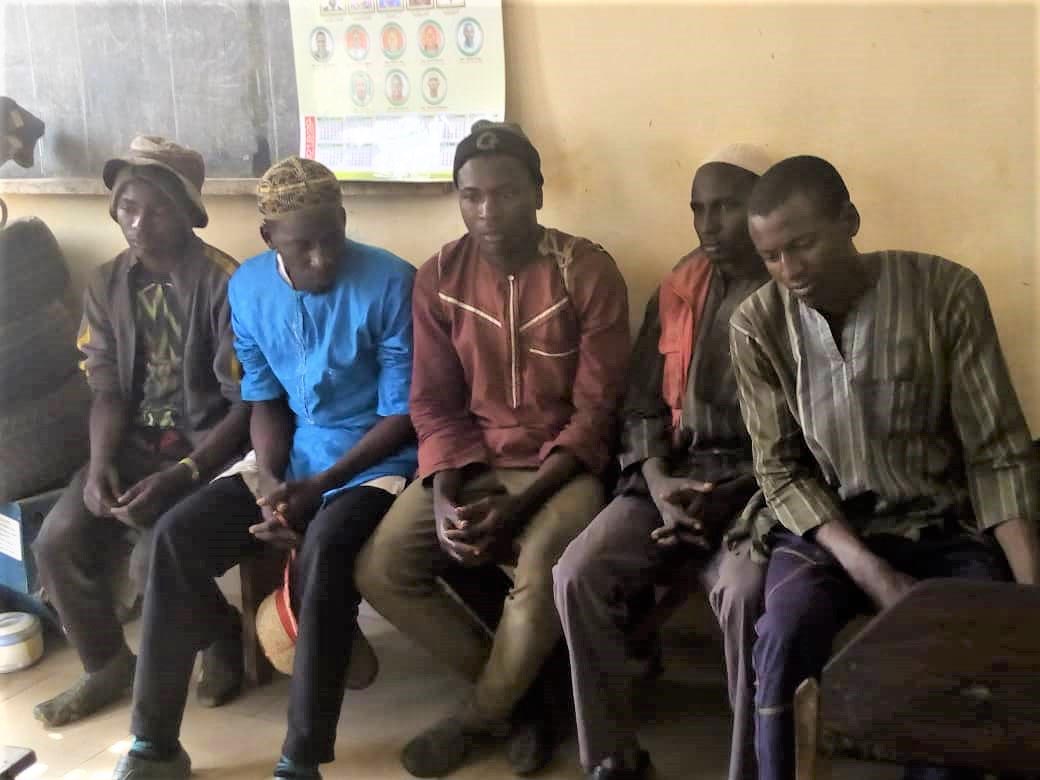 This group of men picturde on March 4 are half of a 10-strong Fulani raiding party. They attacked the village of Matsirga, a section of Madaki Village, and were captured by the town's Christian vigilantes (Image courtesy of Ezekiel Bakut)

MATSIRGA, NIGERIA—The five men with machetes were cornered in the dark amid a stand of bushes near the village where they had come to kill Christians, the monkey hunter said.

“The youth were Fulani men, come to kill as many of our people as they could, but when they retreated they got lost trying to find the road out. Probably because they were not from our neighborhood,” Musa Bala told Zenger News as he retraced the steps of the March 3 attack. Two people were shot dead that night in Matsirga, one village among thousands in the Middle Belt of Nigeria’s badlands.

Three attackers with AK-47 rifles left through another route and escaped. Bala and four of his fellow hunters carrying flashlights and primitive shotguns forced the other five, wielding machetes, to surrender. The self-named “village vigilantes” are volunteers who handle local security.

Bala had heard sporadic gunfire that night and suspected it was a Fulani terrorist raid, he said. He knew the pastoral Muslims had targeted his town’s Christian farmers before, hoping they would abandon their five-acre farms and take shelter among 3 million Nigerians in Internally Displaced Persons camps.

The slaughter of dozens of his countrymen, shot or hacked to death on a humid night, would have been increasingly ordinary. Nigeria’s strictly enforced gun control laws have left automatic weapons in the hands of only the army and criminals, leaving villagers undefended when the eight attackers opened fire with their Kalashnikovs.

Shotguns carried by traditional hunters are illegal and subject to seizure, according to Bala, but police typically look the other way.

Nigeria’s Fula people, an ethnic minority of 15.4 million in a nation of more than 204 million, are nearly all Muslims—including the nation’s president, Muhammadu Buhari. The Fulani are dispersed as far across the Sahel as Sudan and South Sudan.

President Adama Barrow of Gambia and both of his wives are among them. So are Sierra Leone Vice President Mohamed Juldeh Jalloh, Senegalese President Macky Sall and Mali’s prime minister, Boubou Cisse.

Militant bands of Fulani, Boko Haram and the Islamic State of West Africa have combined for a five-year slaughter of between 11,500 and 12,000 Christians in Nigeria, according to Nigerian criminologist Emeka Umeagbalas in a March 8 report from the International Society for Civil Liberties & the Rule of Law.

“Boko Haram, Fulani herdsmen and ‘bandits’ are three names with one mission, to exterminate Christians,” the report says.

Fulani militants killed 1,276 civilians in terror attacks during 2019, according to the International Committee on Nigeria, which will release a statistical report on genocidal killings in the coming weeks. Nearly all the victims were Christians.

Another 350 were murdered in January and February of this year. A spiraling crisis in Nigeria could result in an “implosion of all countries in the Lake Chad region,” said the group’s founder Stephen Enada, creating a new threat to U.S. national security.

Enada joined two members of the U.S. Commission on International Religious Freedom earlier this month to draw the attention of Washington policymakers to the worsening crisis.

“You don’t have to look too deep to see that this is about Christians being targeted for their faith,” said commission chairman Tony Perkins.

“I am convinced that if we move with precision and with passion for the people of Nigeria, we can solve this problem and not look back with regret a decade from now and say we witnessed another Rwanda.”

Civil society groups are little help to Musa Bala and the 200 others who live in Matsirga.

One, Monday Barrikat, is the richest man on Bala’s block. He was the Fulani gang’s target on March 3. Eighteen neighbors were at his house watching TV and recharging their cell phones through his gas-powered generator, Barrikat told Zenger.

Two of those visitors, Mr. Ishaku Musa and Ms. Larba Joseph, were killed by gunfire as others escaped into nearby woods. Barrikat said three other men were shot as they ran. Paul Ishaku, Oliver Joseph and Monday Kelvin are recovering in a local hospital.

Bala and his hunter-vigilante patrol arrived an hour later and began firing, he said, forcing some in the blade-wielding Fulani gang to retreat.

Ten of Barrikat’s guests sheltered behind a locked door and locked windows. Bullets broke the glass but the raiders didn’t try to get in, he said. The Fulani men appeared to run out of ammunition after Bala’s posse arrived.

The vigilantes tied up a group of attackers and delivered them to Nigerian police the following day.

“We found five of them,” said Bala, “hiding in the bushes.”