J. Wyndal Gordon says black Americans might know they’ll never commit a crime, but they can never be sure they won’t be charged with one. 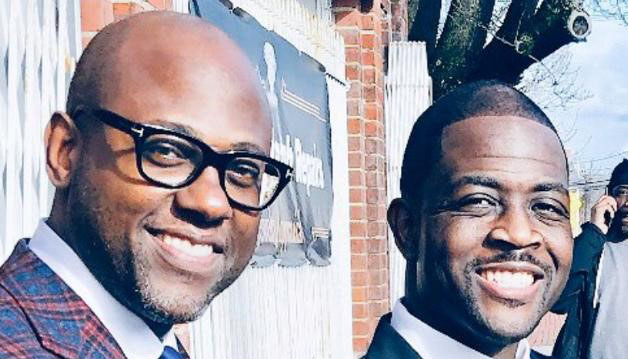 LaQuinn Phillips (right) was accused of dousing his pregnant girlfriend with gasoline and setting her on fire; J. Wyndal Gordon was the only attorney who would take the case, and won an acquittal after an eight-day trial.

When LaQuinn Phillips was accused of dousing his pregnant girlfriend with gasoline and setting her on fire in 2018, he had a difficult time finding a lawyer. When he was acquitted after an eight-day trial, he and his family screamed for joy so loudly that a judge threatened them with contempt of court.

The crime was so brutal that most attorneys either demanded giant legal fees up front or wanted no part of Phillips’ case. J. Wyndal Gordon was different. Known in Baltimore as the “Warrior Lawyer,” he fights battles that others shun.

Phillips had never been in trouble with the law before, and Gordon is confident bordering on flamboyant. He argued his way through an eight-day trial, winning “not guilty” verdicts on attempted murder and three other charges.

As his family shouted and the judge banged his gavel, Phillips embraced Gordon. Tears streamed down the men’s faces.

Gordon thrives on serving the marginalized in America, where he believes black men and women have fewer options for good lawyering.

“Part of my job is to keep the [judicial] system honest,” he told Zenger News, “to ensure that the guarantees provided in the Constitution are honored.”

“I defend the Constitution so that when you’re walking down the street with your loved ones you’re not hauled off to jail indefinitely without any probable cause, that you have rights, and can assert those rights,” he said.

Phillips, 36, said Gordon built a reassuring mutual trust with him. “His confidence was a little unorthodox at first,” he said. “There is an aura about him. But his confidence gave me confidence that I wouldn’t be sent to prison for something I did not do, would not do.

“Gordon was heaven sent for me. I owe him my life.”

The Morgan State University and University of Baltimore Law School graduate’s client list is eclectic. He represented parents who sued Alpha Kappa Alpha Sorority, Inc. because their daughters were not allowed to join. He fought for a 76-year-old woman who police threw to the ground, and a teen arrested for murder after a group ran over an officer in a car.

He also served as standby counsel for D.C. sniper John Allen Muhammad, who represented himself in his criminal case.

“And it hit me: ‘I have to do something about this.’ Next thing you know you, I end up being a civil rights attorney by default, almost because you see so much that it’s hard to avoid it.”

Gordon represented Rhanda Dormeus, whose 23-year-old daughter was shot and killed by a police officer in Randallstown, Maryland in 2016 after an extended standoff. The officer was not charged with a crime, but Gordon won a $38 million civil suit, proving the officer fired the first shot and killed the young mother.

A judge later overturned the award, but Gordon had made his point. And he’ll keep hammering it while Dormeus appeals.

“He felt empathy and he fought hard,” Dormeus said. “He was prepared and thorough. More than that, he connected with me as a person.”

“I was broken. … He was about the only lawyer who would take my case, and I’m glad it was him.”

Gordon says his work is “almost like a ministry” and a way to give “a voice to the voiceless.”

He said his legal idols are two men who have passed on: Johnnie Cochran, the attorney who successfully defended O.J. Simpson, and R. Kenneth Mundy, a flashy swashbuckler who represented the infamous Washington, D.C. Mayor Marion Barry in court.

“They were brilliant legal minds and they challenged the system,” Gordon said. He called Cochran “gracious, humble and endearing”—and said the two courtroom legends earned a reverent nickname.

“I call them ‘Black-nificence’” he said.

«Previous Post
Leaving corporate America behind, teacher-stylist takes on black hair establishment»Next Post
‘A success story in every sense’: How Vada Manager rose to Wall Street and beyond