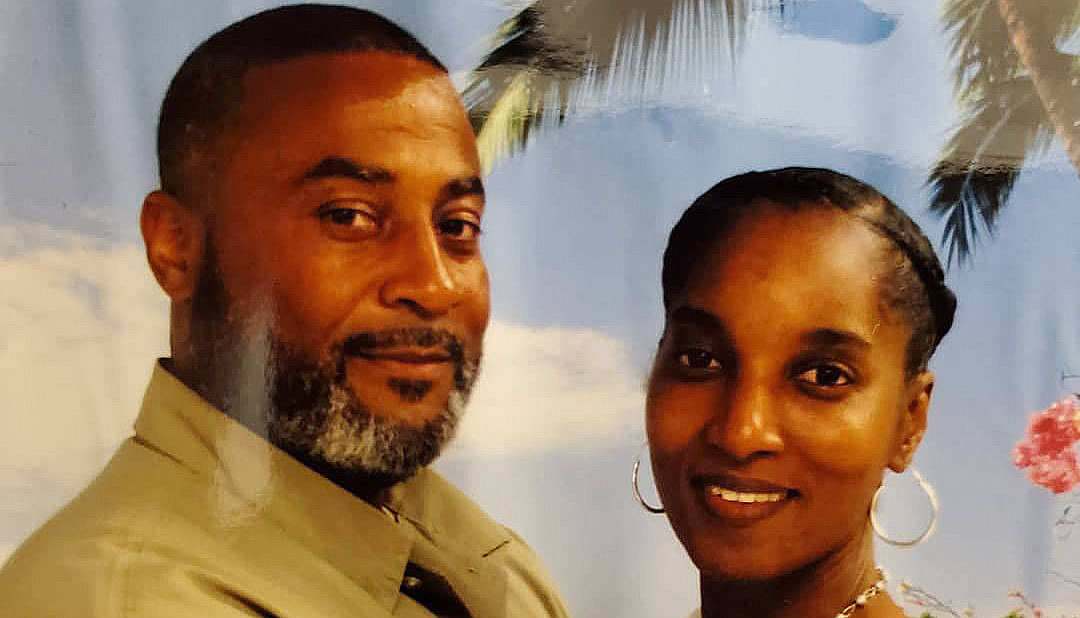 David Barren and Anrica Caldwell posed for this undated photo during a prison visit at Federal Correctional Institution, Loretto. Barren is serving a 30-year sentence at the low-security institution in Pennsylvania, reduced from life plus 20 years. He will be 69 years old when he is scheduled to walk free (Photo courtesy of Anrica Caldwell)

New York City schoolteacher Anrica Caldwell talked with Paul Manafort’s wife one day while they visited the loves of their lives in a Pennsylvania federal prison. Donald Trump’s onetime campaign chairman, convicted of a raft of financial crimes, is scheduled to see daylight in 2024—nearly a decade before the man she’s engaged to marry someday.

David Barren met Caldwell when he was 32 and fighting a bitter divorce. She was ten years younger, falling for him, but too young to be patient.

She found him again 14 years later, still in love, after her own marriage failed. This time Barren was serving a life sentence plus 20 years for one count of conspiracy to distribute cocaine and 51 counts of money laundering. One of his co-conspirators got four years after testifying against him.

President Barack Obama commuted Barren’s sentence to 30 years on his last day in office. Barren believes the First Step Act could set him free. The law, in force barely a year, requires the U.S. attorney general to take a fresh look at federal prisoners, assess their likelihood of reoffending, and fast-track some of the most promising nonviolent offenders for early release.

If the First Step Act doesn’t free Barren, a new grant of presidential clemency from President Donald Trump is Barren’s only chance.

“I pray he does [it],” Caldwell told Zenger News. “Yes, I am very hopeful that Trump issues David’s commutation. But unfortunately, the prosecutors have a lot of say about the reduction.”

Trump’s use of his unique power has been sparse. He has issued just 25 pardons and 10 sentence commutations. Many benefited politicians, however, and other famous people brought to his attention by family and Cabinet members.

Obama’s total was 1,927, more than any other president’s since Harry Truman.

Truman granted 41 percent of requests that reached him, according to the Pew Research Center. Convicts’ success rate with Obama was just 5 percent, indicating how much more common an appeal to the White House is today.

And the Office of the Pardon Attorney is a taller hurdle than ever.

That office, part of the U.S. Department of Justice, advises the White House about who might deserve a get-out-of-jail-free card. It’s populated by some of the same prosecutors who put the convicts behind bars.

“The Office of the Pardon Attorney is a broken system,” said Amy Ralston Povah, founder of the nonprofit CAN-DO Clemency Foundation. “It is in the belly of the beast.”

Povah was one of the lucky ones, granted clemency by President Bill Clinton nine years into a 24-year sentence. She says Trump could commute thousands of other sentences in a mass “amnesty” with the wave of a hand.

“Trump and Jared Kushner have been willing to listen to those of us who work in the field for a long time,” Povah told Zenger, mentioning Trump’s son-in-law aide.

The DOJ’s pardon attorneys remain an obstacle that only the president, not Congress, can remove.

“The prosecutor’s opinion and recommendation is given considerable weight when making their decision as to who gets clemency or a pardon,” former federal prosecutor Marc Osler told Zenger. “There is an inherent conflict there.”

Osler, who teaches law at the University of St. Thomas in Minneapolis, testified last week in a House Judiciary Committee hearing on prison sentencing and clemency reform. He said a prosecutor is rarely equipped to consider the possibility that he put an innocent man in prison.

“You must believe you were never wrong,” Osler told Zenger. “It is almost impossible for people to handle the idea that they ever did that.”

Osler said he expects the Trump White House to “make a change in the formal structure and take the Pardon Attorney out of the Department of Justice.”

He cited what activists call the “trial penalty,” sentencing that’s harsher on the roughly 3 percent of federal criminal defendants who refuse to plead guilty.

“You get a much larger sentence if you go to trial,” said Osler. “Twice, three times, four times as long as if you had pled guilty.”

Asked why some prefer the long odds of a trial and possible acquittal, he said: “Some people are innocent.”

Barren’s rap sheet is crowded, but Caldwell said the evidence in his federal case was slim.

“There were never any drugs found,” she told Zenger.

“He knew what he was facing, but he said he wasn’t going to let them lie on him.”

Caldwell said neither she nor Dave expected him to die behind bars, but she described Obama’s clemency decision as “very bittersweet.”

Barren’s parents, in their eighties, see him every Sunday. They can expect his release in another 14 years.

The United States has the world’s largest prison population, both in raw numbers and as a percentage of the nation’s people. Nearly one in four prisoners on planet Earth are serving their time in the U.S.

Blacks are 14 percent of the U.S. population but 37.5 percent of federal inmates, according to the Federal Bureau of Prisons.

Povah’s CAN-DO advocacy group doesn’t focus on race, but she rattles off the detailed case histories of other hopeful prisoners as though they are her own siblings.

“Michelle West is serving two life sentences plus 50 years for a conspiracy case,” she said. “The murderer was given a deal if he would testify against her.”

And Santra Rucker was serving 13 life sentences before the First Step Act reduced her sentence to 23 years.

“If that does not tell you something is wrong with the prosecutor system, nothing will, Povah said.

Caldwell volunteers as CAN-DO’s vice president. She marveled at how prison can humble the mighty.

Manafort and his wife, at one time the ultimate Trump insiders, “sit next to David and I sometimes,” she said. “When I think of what he was like, I’m sure it was a culture shock, both for him and his wife.”

“One day they went over and asked to be moved and he didn’t get permission. He is now just an inmate. It was strange to see him eating a regular sandwich out of a vending machine,” she said.