Jonathan Kolo learned about life shooting hoops. Now the nonprofit he founded is bringing those lessons to a new generation with a special focus on educating young girls.
By Curtis Bunn March 9, 2020
Facebook
Twitter
Linkedin
Email 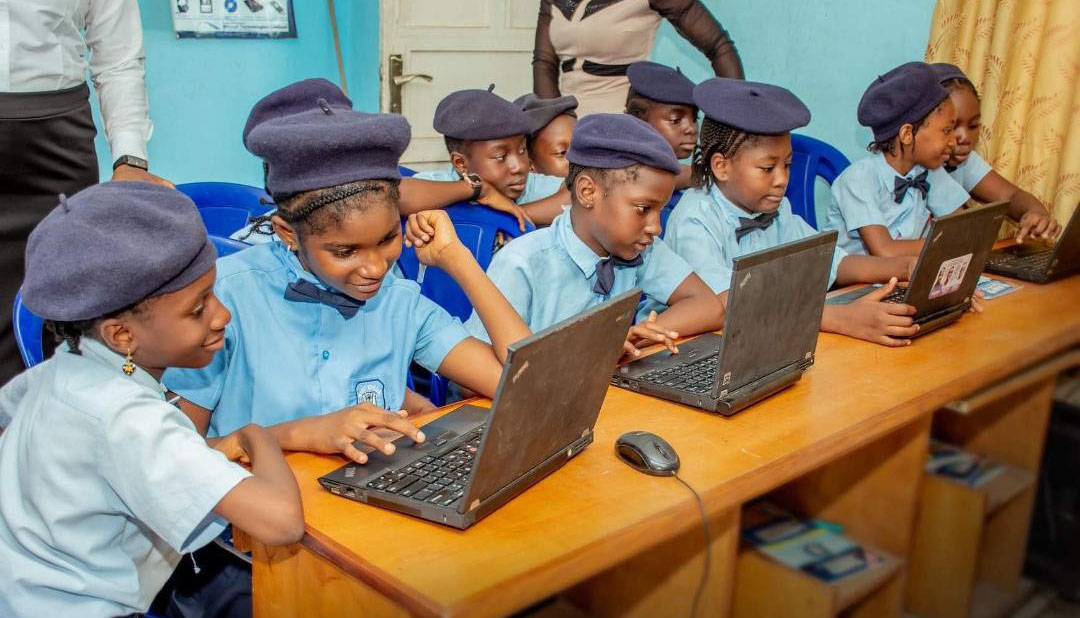 Part of Jonathan Kolo’s mission with his Timeout 4 Africa charity is to focus on girls in Nigeria, helping them break their society’s locked-in gender roles by becoming educated (Image courtesy of Timeout 4 Africa)

Like most kids growing up in Minna, Nigeria, Jonathan Kolo loved basketball. The American transplant still adores the game, taking his 6-foot-6 frame back there every year to teach today’s children the kind of lessons that apply both on and off the court.

“Coming from Nigeria, I used to look at kids from America as different,” said Kolo, 52, who moved to New York in 1984. “But they are not different. American kids … just [have] more exposure. I got exposed to basketball early in life and because I was tall, people encouraged me to continue to play.”

The son of a diplomat, Kolo attended boarding school and lived for a time in Poland before graduating from New York Institute of Technology with a degree in engineering and from Catholic University in Washington, D.C. with a master’s degree in construction management.

After some time in the nonprofit sector, in 1998 he launched his company, Wamadu Builders, which acquires residential properties, refurbishes them and sells them. For Kolo, however, the business success heightened his need to assist in his home country.

He created Timeout 4 Africa, a nonprofit organization that conducts a weeklong basketball clinic in Minna with a two-pronged ambition: to teach the skills of the game and promote life skills.

Kolo had 20 children in the program the first year. A decade later Timeout 4 Africa helped 700 children this year: 300 in the basketball camp and 400 at the “The Finale,” the last day, when youths age 5–18 enjoy a festival and receive school supplies, athletic gear and awards.

“It’s such a rewarding experience to participate in,” said Lauren Haley of Atlanta, who volunteered for the clinics in 2016 and 2017. “The children were excited and thankful to have the opportunity.”

Kolo said he chose basketball as the focal point because the game is revered in Minna, but not taught at a high level. Most importantly, “You learn so much about life from playing the game,” he said.

“Because I was different, I was awkward and shy when I first came to America. But playing ball helped me meet people. I traveled all round New York to play and I grew as a player but most importantly as a person.

“Our program is designed to give that chance to kids from my country.”

Kolo used his money to start the program, but through a tenant learned of Global Giving, a worldwide crowdfunding initiative for grassroots charitable projects. Friends he met through basketball helped spread the word and he raised $250,000 for the yearly program.

His project assists the community build partnerships with families, schools and volunteers to help underprivileged children achieve both academic and athletic success. His wife, Yovanda Kolo, oversees the STEM Expo, part of the program that teaches science, technology, engineering and math, and developed specifically for young girls.

“Girls in Nigeria are not a focus,” he said. “They are expected to grow up, be a wife and have kids. We are trying to break that cycle by preparing them, educating them.”

Kolo plans to focus more on the STEM Expo, which has 50 girls participating. “We want more girls to get this knowledge,” he said. “They have great potential and I’m committed to helping them fulfill it so they can be successful at the University of Nigeria or abroad.”

His efforts have started to yield fruit. So far, three attendees have gone on to play U.S. college basketball: Samson George, 21, at the University of Pittsburgh; Gideon George, 19, at New Mexico Junior College; and Mubarak Muhammad, 21, at Louisiana Tech.

Kolo hopes that even those who may not continue playing basketball stay inspired and motivated to stay in school and reach their goals.

“We want to help them succeed in life. That’s what it’s all about,” he said.