Green groups have called the raging infernos a consequence of global warming, but researchers say people start between 30 and 60 percent of deadly bushfires 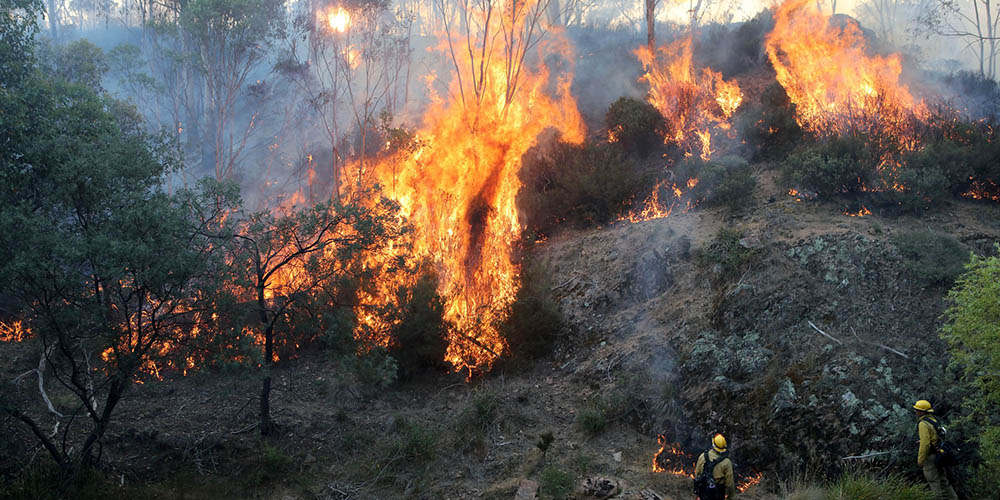 Australia’s 2019-2020 wildfires killed dozens and sparked a worldwide effort to help; The U.S. federal government sent forest firefighters from Idaho to help contain the Tambo Complex fires, which raged for weeks near the city of Victoria (Clay Stephens/U.S. Bureau of Land Management)

Australians are drawing battle lines after months of raging bushfires killed 33 people and produced a continent-wide blame game. As climate change’s fingerprints fade, evidence is mounting that arson was a significant factor.

Researchers conclude that people start at least 30 percent of such deadly blazes, and possibly twice as many. Environmentalists continue to attribute them to the effects of climate change.

The conflagrations consumed more than 27.2 million acres of land—an area larger than Tennessee. Australian authorities have pursued 55 people since August for allegedly lighting them deliberately in New South Wales.

Statistics provided to Zenger News by New South Wales police don’t make clear how many of the 55 suspected arsonists were arrested or will stand trial. They say more than 200 others face lesser “legal action.”

That broad term covers warnings, criminal charges and several intermediate sanctions. It applies to 267 people for 328 bushfire-related offenses, according to the police data.

Seventy juveniles also face legal actions for wildfire-related offenses. It’s unclear if any of them have been charged with setting fires maliciously.

Another 126 are accused of flouting a total ban on open fires. Forty-one discarded lighted cigarettes or matches on land, police say.

Bond University associate professor Katarina Fritzon said experts “don’t truly know what role arson plays, but in reality it is likely to be between 30 and 60 per cent of the overall figure of bushfire causes.”

“That range encompasses accidental fires, with 30 per cent representing the ones deliberately and knowingly lit,” she said.

Australia’s catastrophic blazes have led Craig Kelly, a member of the nation’s ruling conservative party, to highlight the role arson played. Data from years past suggest what may have happened this time, he said.

Citing a 2009 Australian Institute of Criminology study, he said 13 percent of Australian wildfires are deliberately set, 37 percent are suspicious and 35 percent are termed “accidental.”

“It’s very, very hard for fire authorities to prove deliberate arson,” Kelly told Zenger. “During the catastrophic bushfire days in my electorate, right on the turn of the wind, there was a fire that broke out in the national park. Just by coincidence, one of the army Black Hawk helicopters was training with night vision goggles and spotted a bloke wandering through the national park.”

“Unless you can actually catch someone there putting a match to a bush, arson is a very difficult crime to prosecute,” Kelly said.

He mocked the suggestion that the recent wildfires and climate change are linked.

“I was in a debate with a senator from the Greens Party before Christmas and he was saying that if you fill a room up with gas, the gas explodes. There was a narrative that was implied whereby carbon dioxide was self-combusting. That was the absurdity of it,” Kelly said.

The Climate Council said the Australian summer produced a trifecta of heatwaves, droughts and wildfires, made worse by climate change.

“Climate change is supercharging the extreme weather events we are witnessing,” the group told Zenger. “We have seen temperature records smashed, wildfires in winter and prolonged drought.”

“The scale and severity of the bushfires make it very clear that we have to do more to tackle climate change. Australia is a significant player in the global climate crisis and what we do matters,” McKenzie said.

“Climate change is influencing all of these things,” Climate Councillor and author of “Dangerous Summer: Escalating Bushfire, Heat and Drought Risk” Professor Will Steffen said.

Some environmentalists believe fires on the scale of the most recent blazes can start a feedback loop, as carbon emissions trigger extreme events—including fires—which themselves emit more carbon into the Earth’s atmosphere.

The UK Meteorological Office forecasts that 2020 will see one of the largest annual rises in carbon emissions, and that the Australian fires will be a contributing factor behind that increase.

Kelly says the Australian bush is more combustible than other wilderness areas.

“The eucalyptus trees are basically known as fire trees,” he said. “They drop their bark, leaves and branches and sit on the forest floor and don’t decay. That builds up, but the traditional practice of the native Aboriginals was to burn that regularly during the cooler months.”

A lack of what are known as hazard reduction burns created all the ingredients for raging infernos, according to Kelly.

“There was a Royal Commission after the 2009 Victorian wildfires that said there should be a minimum of five percent of the state’s forests and public lands burned by hazard reduction every year,” he said. “That amounts to something like 385,000 hectares [951,000 acres] in Victoria every year.”

Kelly said authorities in Victoria burn only about one-third of that every year, and his constituents complain when more controlled fires are set.

“I had people ringing my office about the burns and the smoke,” he said. “I said to them, ‘It’s going to burn, and yes it’s an inconvenience, but far better to put up with an inconvenience now than have it burn when it’s 40 degrees Celsius [104 degrees Fahrenheit] and the wind is blowing,’”

The highest-ever loss of human life from an Australian wildfire came in Victoria, where the 2009 Black Saturday blazes caused 173 fatalities, destroyed 2029 homes and burned 450,000 hectares [1.1 million acres] of land.

Fritzon said Sokaluk fit the profile of an arsonist, but added that bushfire arsonists are different from other habitual firebugs. Authorities often hunt after bushfires for a “mentally and intellectually challenged, slightly older arsonist who is socially isolated and with poor general life skills.”

Fleshing out that profile is difficult, she said, because most arsonists are actually in prison for other crimes.

“You’ll find that what they were convicted for wasn’t arson. Convictions when fire causes death are categorised as manslaughter, so it’s hard to track these people down in prisons,” he said.