The famed novelist wrote about the evils of gin joints, but ordered his butler to keep a stash of gin punch under his dinner table and serve it only to himself and his boss. 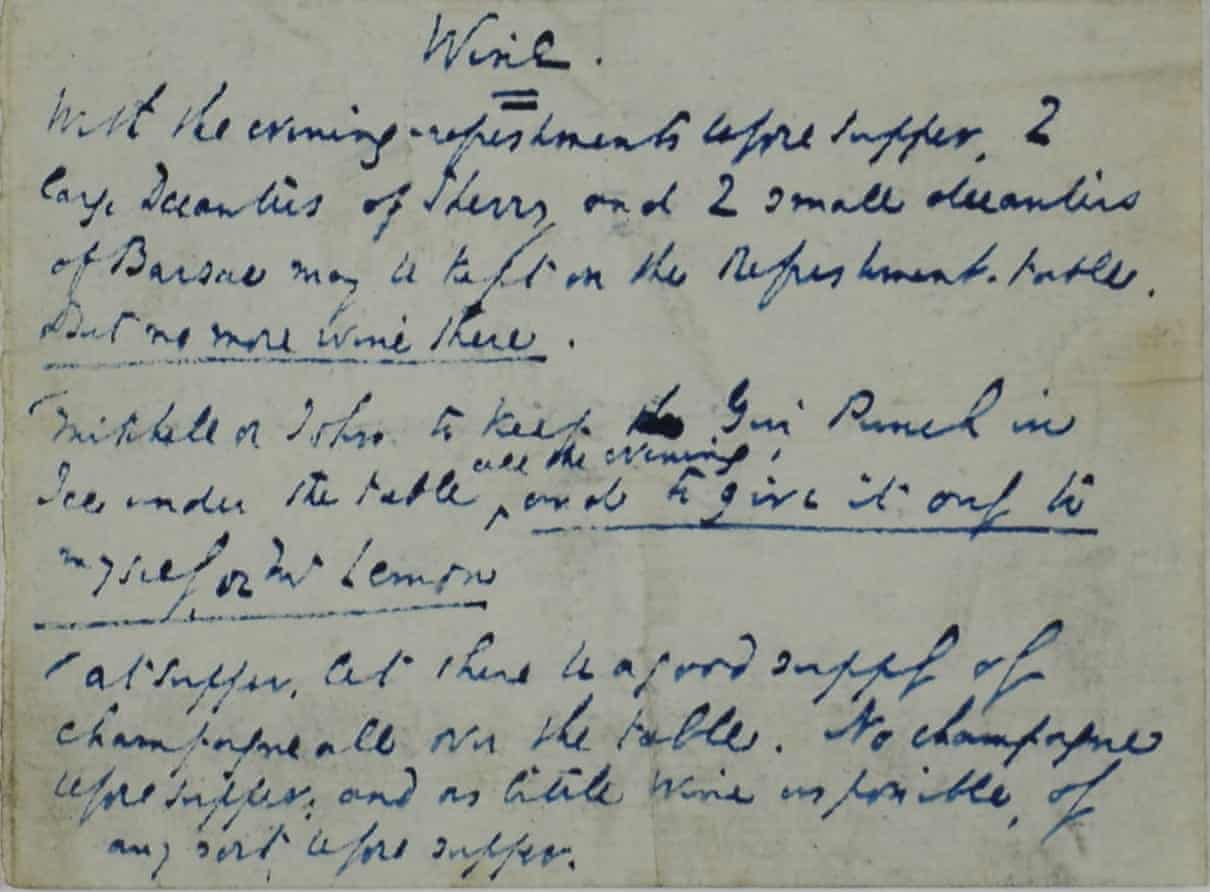 Legendary novelist Charles Dickens kept a secret stash of gin punch under his dinner table and told his butler to serve it only to him and his boss. A previously unknown hand-written letter unveiled at the London-based Charles Dickens Museum contains the instructions. For gin aficionados, the revelation couldn’t come at a better time: London is awash with it.

Martini fanatics in the U.S. are plying their own “ginaissance,” too. The demand has never been stronger.

An anonymous American allowed the museum to pick and choose what to buy from his extensive collection of Dickens memorabilia. Curators spent about $3.9 million on their favorites, including the note about just how boozy a dinner should be.

By all accounts the event was wine-soaked, a dinner that Hemingway may have enjoyed—though only if he were part of Dickens’ own private set and willing to stay sober until the first course.

“Wine,” begins the instruction. “At supper, let there be a good supply of champagne all over the table. No champagne before supper, and as little wine as possible, of any sort, before supper.”
Unlike at Cana, however, the best drink was held back from the masses. Two members of his household staff named Mitchell and John were “to keep gin punch in ice under the table, all evening, and to give it only to myself or Mr Lemon.”

Lemon was the founding editor of Punch magazine, and Dickens’ boss.

Despite Dickens’ own campaigns against the gin palaces of his day, he exempted himself from finger-wagging moral outrage. For him, the juniper-scented sauce was good—especially if served only for the elite as a punch, iced, flavored with honey and Madeira and under the table.

The undated but instantly famous letter is drawing new attention to gin’s ubiquity in modern London. Not since the notorious days of the British illustrator William Hogarth when the saying went “Drunk for a penny, dead drunk for tuppence” has it been quite so ubiquitous. Hogarth’s most famous pieces are titled Beer Street and Gin Lane—a 1751 pairing meant to argue gin’s evils and ale’s superiority.

Gin arrived in England after 50,000 troops took part in the Thirty Years’ War midway through the 17th Century. Finding it mostly in Holland, the troops called it Dutch Courage. With the gin came military training and a new belief in staunch Protestantism—things that would become valuable a short while later when the same men took on King Charles I in England’s own civil war.

Today every other railway arch in London has its own little still, with names like Little Bird, Kew, Sipsmith, Bimber, Becket’s, Butler’s and Portobello. Gin flavored with rhubarb, raspberry, chocolate and even seaweed is drunk in pubs, cocktail bars and gin joints. The UK is importing small batches from Ireland, Wales, Germany and even France.

In the 1980 book “Drinking with Dickens,” Dickens’ great-grandson Cedric disclosed the family gin punch recipe. It calls for 30 minutes of simmering over medium heat: 2 cups of gin, 2 cups of sweet Madeira wine, 1 tablespoon of dark brown sugar, the peel and juice of 1 lemon and 1 orange, a whole peeled, cored and sliced pineapple, 3 whole cloves, 3 cinnamon sticks and a pinch of ground nutmeg.

The writer was conflicted by the spirit and the culture around gin. He wrote in a 1835 newspaper essay, later published in “Sketches from Boz,” about the squalor of early Victorian London, and the gin-soaked vice served with style just blocks away.

“[F]ilth everywhere—a gutter before the houses and a drain behind—clothes drying and slops emptying, from the windows,” he wrote, describing “men and women, in every variety of scanty and dirty apparel, lounging, scolding, drinking, smoking, squabbling, fighting, and swearing.”

Then turn the corner and in front of his eyes, a gin bar.

“All is light and brilliancy. The hum of many voices issues from that splendid gin-shop,” says Dickens’ pen, comparing the ornamented and “perfectly dazzling” building with “the darkness and dirt we have just left.”

Despite the inescapable glamor, Dickens concludes with the misery of inveterate drunks.

“[T]he landlord hits everybody, and everybody hits the landlord; the barmaids scream; the police come in; the rest is a confused mixture of arms, legs, staves, torn coats, shouting, and struggling. Some of the party are borne off to the station-house, and the remainder slink home to beat their wives for complaining, and kick the children for daring to be hungry,” he writes.

Two decades later, perhaps with a few dozen choreographed dinners behind him, he mailed a letter to his editor William Henry Wills, asking how he was enjoying his gin.

“I am impatient to know how the Gin Punch succeeded with you,” Dickens wrote. “It is the most wonderful beverage in the world.”