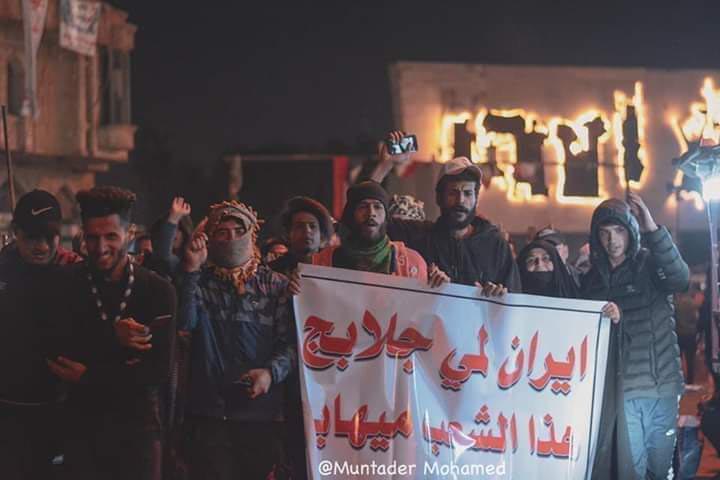 Members of Iraq’s parliament received death threats and harassing text messages as part of an Iranian intimidation campaign to force support for a resolution demanding that U.S. troops leave Iraq.

While Western news reporting has largely portrayed the Iraqi parliament vote as signaling domestic impatience with the presence of some 5,300 American soldiers in Iraq, evidence of the Iran-backed intimidation campaign casts the parliament vote in a new light.

The threats came from Katib Hezbollah, a pro-Iran militant group funded by Tehran and designated as a terrorist group by the U.S. government.

These threatening messages were exclusively obtained by Zenger News and independently confirmed by Iraqi officials.

“This is coercion through pressure and terrorism and threats [on] their lives,” said Entifadh Qanbar, the deputy Iraqi military attaché in Washington, D.C. “Sunni parliamentarians received text messages from militias threatening their lives if they refused to attend the parliamentary session or failed to vote to expel U.S. forces from Iraq. This is the way this [Iranian] regime has been functioning since 1979.”

Zenger obtained from Iraqi sources social-media posts and one such text message that was part of that intimidation campaign.

“Iraq sovereignty and the dignity of Iraqi people is a trust in your necks,” reads one text message sent to anti-Iran lawmakers on the eve of the historic vote. “Either honor and highness, or submissiveness and humiliation. Between what is right and what is wrong, the severe punishment from the Iraqi people.”

“Severe punishment” is a euphemism for a death threat, according to Iraqi analysts.

Abdullah Mohtadi, leader of the Komala Party of Iranian Kurdistan, which is based in Northern Iraq, said that “Iran’s intimidation of Iraq’s political system is longstanding. It has intimidated Iraqi ministers in government and members of parliament and has used bribery to influence them as well.”

Four members of the Iraqi parliament confirmed receiving Katib Hezbollah’s threats via text or WhatsApp. Other lawmakers refused to discuss the messages, but didn’t deny receiving them.

Katib Hezbollah could not be reach for comment. The group’s name roughly translates into English as the “Party of God-Brigade”; it is independent of Hezbollah, a Lebanon-based paramilitary group accused of multiple terror attacks against American, French and Israeli forces. Both organizations are funded by Iran and formerly commanded by Iran’s Maj. Gen. Qasem Soleimani, who was killed by a U.S. Hellfire missile near Baghdad Airport on January 3.

”This umbrella designation [of the PMF] refers to more than 68 groups,” said Gen. Majid Qaysi, a retired Iraqi military intelligence officer. ”At least 10 are Shia groups backed by Iran. There are more than ten militias that are closely related to Iran present in Iraq and Syria, such as Al-Najaba Movement, Asaib Ahl al-Haq, Katib Hezbollah, Kataeb al-Shuhada, Imam Ali Brigades, and Saraya al-Khurasani. Iran is training, arming, and financing them.”

Other PMF groups include Sunni Muslim or Christian militias, but those with ties to Iran are among the most influential in Iraq.

The texts were plainly intimidating, say Iraqi officials. They point to a sustained Iranian-influence campaign in Iraq aimed to silence journalists and politicians.

To further intimidate parliamentarians ahead of the vote, pro-Iran groups staged anti-American demonstrations in key parliamentary districts. To gather a crowd, pro-Iran Shia militants canvassed neighborhoods in Baghdad, reportedly threatening Shia residents with beatings or death if they declined to attend pro-Iran demonstrations.

Many of the Iran-linked groups act as enforcers for criminal enterprises. Iraqi Christians, who operate virtually all of Iraq’s liquor stores, are often forced to pay mafia-style protection money to Katib Hezbollah, according to Shia Iraqis who spoke to Zenger. Fearing for their lives, they refused to give their names. The existence of the protection rackets could not be independently confirmed.

Captured Iranian intelligence documents say Tehran is frustrated by what it sees as the irreligious nature of the umbrella PMF forces, which ignore Islamic edicts to abstain from alcohol. Multiple sources in Iraq confirmed to Zenger that many PMF militias have links to illegal brothels, night clubs, gambling halls, and drug smuggling operations in Iraq.

After the Jan. 5 vote to expel U.S. troops, Iraq’s acting prime minister, Adil Abdul Mahdi, marched alongside pro-Iran demonstrators to denounce America’s role in Iraq. He later met with the U.S. Ambassador to make clear that the parliament vote had rescinded America’s invitation to use its bases in Iraq, which was granted by the parliament in 2014 to fight ISIS. Officially, Mahdi’s government lacks the legal mandate to make such demands.

Iraq currently lacks a constitutionally authorized government. The acting prime minister is a caretaker until new elections can be held. The 2018 elections were boycotted by most major political parties. As a result, only one out of five eligible Iraqi voters participated.

Prime Minister Mahdi’s resignation was prompted by massive, violent, anti-Iran demonstrations that were touched off in October 2019 and have flared up repeatedly ever since, despite beatings and threats from pro-Iran militants and government forces. Some 492 anti-Iran protestors have been shot dead, mostly by Shia militia fighters, since October 2019, according to the United Nations’ Commission on Human Rights.

Plucky protestors have responded creatively to such repressive tactics. One demonstrator brought a pet lion to the protests, in a dramatic scene captured on video.

»Next Post
Journalist killings lead to closure of U.S.-funded broadcasters in Baghdad